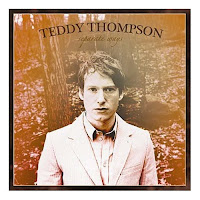 Teddy Thompson is the son of Richard and Linda Thompson, and this begs the question, what would it be like to be the scion of the couple that made one of the best break-up albums of all time (Shoot Out The Lights)? Strange, I'd guess.

Children of rock stars who try to make a go of it on their own have approached it in a multitude of ways. In Jakob Dylan's case, he purposefully distanced himself from his father as he tried to make his own name. At the other extreme there's Ben Taylor, who just flat out imitates James.

Teddy doesn't sound like Richard, nor does he run away from the relation. In fact, it seems life can be good when you have a widely respected guitarist / songwriter for a dad. The impressive list of guest players on this album includes Garth Hudson (The Band), Dave Mattacks (Fairport Convention, XTC) and, on five songs, Richard himself. What's more impressive is that Teddy still manages to show he has the chops to make it on his own.

As an album, Separate Ways is well-sequenced and varied in mood and style. In terms of individual songs, standouts include the musical self-pep talk I Should Get Up, the lost Crowded House hit Altered State and You Made It, a pop rocker that includes the line "you're so good looking," which will have a nice double meaning for any Seinfeld fan.

The title track serves as a centerpiece for the album and for a trilogy of songs about the end of a relationship. Separate Ways manages to be both earnest ("not all who love are blind / some of us are just too kind") and funny ("I don't care about you / If you don't care about me"). That's actually a combo that shows up a couple of times on the record, and Thompson handles it quite well.

To wit, I Wish It Was Over (the first part of the trilogy) injects humor into the serious matter of bad relationships. Basically, he tells his lover he can't stand her anymore and says, "this bein' together / is tearin' me apart." Similarly, the opener, Shine So Bright, sounds like a serious meditation, complete with heavenly background vocals from fellow musician offspring Martha and Rufus Wainwright. But a close listen to the verses and you realize that Teddy has his tongue firmly in cheek while wishing for a ludicrous level of fame.

The funny lyrics / serious delivery method wouldn't work for a whole album. And why would you want it to, when a country tune like Sorry To See Me Go (the final part of the break-up trilogy) can be so stirring in its simplicity? Or a song like That's Enough Out Of You, which is just straight up funny, and foot-stomping to boot? It's such an effective kiss-off, it makes me wish I was really pissed at someone!

As he proves on Separate Ways, Teddy Thompson knows how to use his music to work through negative emotions. I guess he comes by that pretty honestly.