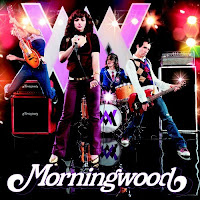 It takes a certain kind of band to write their own theme song. Self-aggrandizement is practically a requirement in R & B and rap (see My Name Is Prince, Motownphilly, or Public Enemy #1 for the tip of the iceberg), but it's rare in rock 'n' roll and pop.

There are always exceptions. If a rock or pop artist uses their name in a song, it's usually in one of two ways. Some groups have fun putting their name in the title of song or in a lyric, even if the lyrics have nothing to do with the band itself. Examples include:

The other way is more audacious. It's probably The Monkees' fault. With the exception of Pearl Jam, what band wouldn't want their own TV show?! So several have written their own theme song, either celebrating how great they are, or telling us a little about themselves. In this category we have:

Bacstreet Boys - Everybody (Backstreet's Back)
Devo - Jocko Homo ("are we not men? / we are Devo!")
The Hold Steady - Positive Jam ("I got bored when I didn't have a band / so I started a band / gonna start it with a positive jam / Hold Steady!")
Living Colour - What's Your Favorite Color? (Theme Song)
The Rosebuds - You Better Get Ready ("with The Rosebuds on the radio she'll be yours forever more")
The Sounds - S-O-U-N-D-S
They Might Be Giants - They Might Be Giants
Wang Chung - Everybody Have Fun Tonight ("everybody Wang Chung tonight")

Other self-referencers include Lisa Loeb (Lisa Listen), The Dandy Warhols (The Dandy Warhols Love Almost Everyone), Jimmy Ray (Are You Jimmy Ray?), and Annie (Anniemal). The latest to join this exclusive club are Morningwood, whose irresistable first single, Nth Degree, is as great of a theme song / introduction as a band could ask for. For one, they spell their name over and over again. There's no way someone could hear the song on the radio and say "who is this?". And they also describe themselves humorously: "he bangs the drums, she's V.I.P., he never stops, got O.C.D." They also claim to love each other and sleep in one big bed. Who could resist?

Well, Morningwood may inspire some scoffing and/or backlash from stuffy critics and hipsters. In addition to talking themselves up, their name, album cover, band constitution (three older vets from other bands, one young hot female singer), logo, and even web address (www.morningwoodrocks.com) make them targets for those who take themselves too seriously and think everyone else should as well.

And that's the thing. The band's debut album is nothing but fun, with a good sense of pop music history. Choosing to rock 10 times out of 11, the CD sails along without a weak track or showy experiment. By turns they recall Hole, Garbage, Blondie, No Doubt, and The Pixies.

Yeah, there's some silliness, like Take Off Your Clothes (where lead singer Chantal argues with bassist Pedro about whether or not they should get naked; she's ready, he wants to "get a little more aquainted"), Body 21 ("my body's 21 but my mind is ageless / my memory is M.I.A.") and New York Girls (do we need another song about how great New York is?).

But other songs, like Televisor, Jetsetter, and Babysit are prime pop rock. For me, Easy is the standout. Chantal's voice is gritty and strained on the verses, but the boys come in as a smooth new wave choir on the chorus. It sounds like Courtney Love doing a song with Donnie Iris (I'm sorry about the obscure '80s reference, but it really does sound like Donnie's synth-driven blues with Courtney's almost-shot voice on top). The album ends with the irresistable shout-along Everybody Rules (warning: more spelling), and the only medatative number, Ride The Lights, which may be about drugs, or someone dying, or both.

Lately my music tastes have gravited toward the unflashy and sincere. Still, I have my lapses. Morningwood remind me that not every band should have its own theme song, but we need those that do.

Carmamma said…
Bravo, I love this observation! Just jealous I didn't think of it first:)
1:20 AM