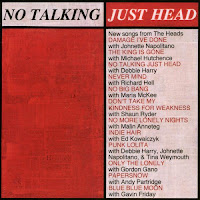 Let me start with a disclaimer: I have never been in a band, so I do not understand the mentality of people who make music as part of a collective. Thus, it is completely beyond my comprehension why bands soldier on when they lose their lead singer.

But for the most part, it's just ridiculous. Did you know The Doors made two albums without Jim Morrisson, and are still trying to keep the strange days alive even as we speak? Have you heard that The Cars are reuniting, without Ric Ocasek?! Have you seen the Steve Perry clone that Journey tours with? Did you watch Rock Star: INXS or Are U The Girl? this summer? How can these bands not realize that they are embarassing themseleves?

Maybe it's all about the benjamins, but it has happened to the best of bands. Consider The Heads, an ill-advised 1996 project by Chris Frantz, Tina Weymoth, and Jerry Harrison, three-fourths of Talking Heads. When David Byrne spurned their offers to reunite, they recruited 11 different singers and made an album. I know I said I was fine with a band going on under a different name, but I can't count this project in that category. Beyond the brief "oh that's clever" factor, is The Heads really the best name they could come up with?

And why did it even need to happen in the first place? Frantz and Weymouth could have just stuck with the Tom Tom Club. Harrison was on a hot streak producing albums for Live and Crash Test Dummies. Who knows, but it happened, and while the results are not enough to soil the Talking Heads name, they are nonetheless best forgotten.

What's strange is they recruited some pretty good singers, people like Debbie Harry of Blondie, Michael Hutchence of INXS (ironic, huh?), Shaun Ryder of Happy Mondays, Maria McKee of Lone Justice and Gordon Gano of Violent Femmes. What's stranger is that they didn't play to those singers' strengths at all! Harry's charisma and sex appeal is wasted on the plodding title track, The King Is Gone is too slow and boring for Hutchence (they should have known; Never Tear Us Apart is the only good slow INXS song), and McKee's country background should have been perfect for the sometimes twangy Heads, but instead No Big Bang is just a bland rock song. Similarly, they must have decaffinated Gano before they brought him in to sing on Only The Lonely.

But the problem is more than "right-singer-wrong-song." The music is also to blame. Instead of sounding like Talking Heads with a different singer, a lot of the songs sound strangely like Depeche Mode in their rock phase. Especially guilty of this is the opener, Damage I've Done, with Johnette Napolitano from Concrete Blonde.

In my mind, only five songs are anywhere close to okay. Punker Richard Hell does fine on the definitely-not-punk-but-still-groovy Never Mind, and Gavin Friday's closer Blue Blue Moon lands somewhere between Tom Waits and David Bowie, though not as good as either.

Surprisingly, the one of the best tracks features a non-singer. Malin Anneteg was a Swedish spoken word artist discovered by Frantz and Weymouth and her No More Lonely Nights manages to be hypnotic and engaging. And how could I ever hate Andy Partridge's Papersnow? This track actually sounds like it should, like XTC and Talking Heads got together to jam. The music is insinuating and Partridge basically shouts out nonsense, but it's still heads above everything else.

Despite the sporadic quality, the project was not a success and thankfully did not spawn a follow-up. Again, I have never been in a band, so I don't know what it's like. But I'd like to think that I'd know when to just let a good thing stand as it was. Maybe The Heads learned that the hard way.

Anonymous said…
You are almost completely correct. The latest and most embarassing example being "Queen + Paul Rodgers". This is wrong on so many levels. But, as a lead singer in a rock band in Los Angeles, I do recognize that if I were to leave, it would create enormous problems for the band. Should they just quit? The thing about playing music live in a "collective" as you have said is that it is SO invigorating, SO adrenalizing, SO fucking bitchin' that you really don't ever want to stop doing it. The high of that audience contact that actors and stand-ups talk about is there but it's there in spades. It isn't just momentary and, unlike those other media, if a song is not being appreciated by the audience, we can just do it for ourselves and be praised for putting on a "great show". A good band experiences a nirvana unlike any other.
But, what do you do when the face of tha band dissappears? You love to play with these other people. You love to play in front of people. It's a dilemma that has no real answer, it's just a problem.
I hate Brian May and Roger Taylor for besotting an image, but I secretly desire seeing them perform my favorite songs in concert.
Kinds sucks.
Allen
Lead Vox
www.throttlebacksparky.com
www.myspace.com/throttlebacksparky
12:14 PM

Anonymous said…
Johnette Napolitano was in Concrete Blonde, Linda Perry was in 4 Non-Blondes.
2:14 AM

Paul V. Allen said…
Thanks for pointing that out! I was obviously having a "blonde" moment myself. I'll fix the mistake.
7:58 AM

Anonymous said…
I respectfully disagree with your review. This album is amazing. I never cared that Davis Byrne was absent. I approach this more like I would a compilation. Cool that the Heads wrote the music and we got to hear familiar artists venture out and do something a little different than they might have otherwise...I think Maria McKee's No Big Bang is A+. And as far as creativity goes, no one has ever done this before as far as I know. Its authentic and completely in the spirit of the foundations of this band.
7:36 PM

electro said…
As a big Talking Heads fan, I probably should have hated this album, sounding as it does nothing like Talking Heads. I was initially taken aback by how heavy much of it is. But after 10 years or so of listening to it off and on, I find most of these songs quite memorable. It's a very inconsistent album, and sounds more like a compilation than a band, but there must be something special about the remaining heads, because with so many wildly different singers, they consistently brought it. I give it a solid B++
2:05 PM

Anonymous said…
You are correct in theory, but wrong re No Talking Just Head. It is a brilliant album, with edgy and original songs that have stood the test of time. I agree with the previous comment - No Big Bang is a terrific song, an A+.
1:56 PM