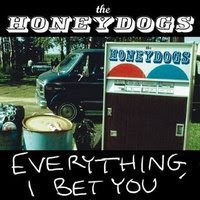 I owe The Honeydogs an apology.

While praising their 2003 album 10,000 Years the back of my hand got a little sore. I couldn't be content with just declaring the album a wonderful piece of work. I had to add that the astonishment I felt. THIS band made an album THAT good?! You're kidding me.

My surpise was genuine, but it came from an undereducated place. When I first heard 10,000 Years I had knew a total of three Honeydogs songs. It's sort of like someone who has never eaten an olive in their whole life, and in fact has claimed to dislike them, and is then surprised when they try one and like it!

So I've educated myself. I've started filling in the back catalog (where I discovered that the band's 2001 album Here's Luck had some unexpected daring of its own), and I've seen them in concert three times. The first time I saw them, last November, I was impressed with how good their old songs sounded next to the new 10,000 Years tunes.

One of those old songs was a run-laps-around-your-brain country rocker called Tell Me. It appeared on their second album 1996's out-of-print Everything, I Bet You, which I picked up recently in the used racks at Cheapo. And, at the risk of reinjuring a knuckle or two, I was surpised again! Where 10,000 Years was complex, daring, and stylistically diverse, this album is simple and direct, country-folk-rock. But damn if it isn't just as effective.

The CD opens with the twangy harmony of Your Blue Door, a song the band liked so much they reused it on their major label debut, Seen A Ghost. Highlights over the next 11 songs include the quiet lament of Miles Away, the country shuffle of Kandiyohi and a randy celebration of monogamy called Busy Man.

For me, the record's standout is not Tell Me. Nope, it's Over You, a folky statement of independence. The narrator is tired of the relationship he's in and trying to convince himself to be done with it. But he's not that strong yet. He's not saying he IS over her, but that he WANTS to be. He even sounds like he's seeking permission: "Give me the strength to walk out the door / and feel the shock of the cold air of loneliness / I wanna try and stand the test of the blues."

Moth continues that theme, detailing the frustrations of dealing with a romantic lead who can't learn her lines but won't give up the part. It's a bit more complex than Over You, but the narrator is still looking for strength, this time to resist.

That song ends with a sort of slow dance breakdown, which gives off just a hint of compositional ambition. If you take it along with the finely written tribute Miriam, you can almost see Adam Levy's songwriting developing into what it eventually became on Here's Luck and 10,000 Years.

That's NOT to say there was anything wrong with it back in 1996. While I love the idea of personal growth, I hate the idea that musicians MUST make big leaps in sound and style with every record. Everything, I Bet You proves you can do it up simple and still rock the show.

I hope that's as unqualified of a compliment as I can give the boys, even if it is 10 years late.

Grade: A-
Fave Song: Over You