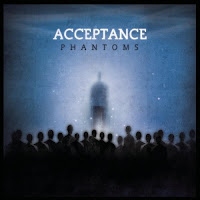 With the wide diversity that now exists in popular music, I must admit that I feel a little guilty when I buy an album by a white male rock band. In fact, it seems almost quaint to still do the guitar-bass-drums-singing thing with no frills or stylistic ideals. As such, I rarely seek out straightforward rock albums.

I first heard Acceptance via iTunes' great "Free Download Of The Week" program, which is exactly what it sounds like. Acceptance was represented by the single Different, a piano-driven piece of passion. Though I dug the song, I felt I could not support another Coldplay clone, especially when the real thing isn't exciting me all that much lately.

But then on a whim I looked up Acceptance's debut album on Amazon.com and decided to take a listen. What a pleasant surprise to discover that the rest of the album has much more in common with Jimmy Eat World than it does with Travis. Indeed, a quick scan through the "thank yous" in the liner notes reveals a host of emo bands to whom Acceptance offers gratitude. And the "Customers Who Bought This Title Also Bought" section on Amazon reveal more emo CDs.

That said, Acceptance is a bit *ahem* different, from your usual emo band. Different may be the odd man out on the album, but it is followed by an instrumental titled Ad Astra Per Aspera (Latin for "through our endeavors, the stars") which shows Rush-like aspirations. Even so, those two songs are surrounded by 10 others that display the hallmarks of emo. Most songs at the three minute mark? Check. Dueling vocals and harmony? Check. Passionate, earnest lyrics about bad relationships and the coldness of life? Check.

Whew, in my twisted categorical mind emo bands don't count as straightforward rock, even if all the members are white boys. That's a load of guilt off my mind.

Standout songs include Take Cover, The Letter, and In The Cold, but I certainly don't admire them for their lyrics. They say almost nothing interesting or arresting (instead we get strings of cliches, like the ridiculous chorus of So Contagious: "Could this be out of line? / To say that you're the only one breaking me down like this / You're the only one I would take a shot on / Keep me hanging on / So Contagiously"), but are still excellent to sing along with, especially on a nice summer day with the windows rolled down.

Grade: B+
Fave Song: The Letter