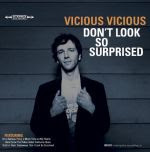 Don't Look So Surprised is one of the best break-up albums I've ever heard.

Through seven interconnected songs, the CD follows a doomed relationship between our narrator and a girl named Jenny. In the opener, It's A Serious Thing, the protagonist speaks directly to Jenny, telling her "it's time we forget about the days that you used to be mine." And then he spends the next 6 songs remembering.

2 Much Time On My Hands uses a laid-back seventies shuffle to tell the story of how they met, at a swimming pool party where she talks about "hot sex" with her ex-boyfriend. Still, they end up going to a drive-in movie and things begin to snowball. (My favorite part of this song is the repeated line "the cigarette refuses to burn," which seems like an echo of the Hopefuls' - Appelwick's other band - album title, The Fuses Refuse To Burn).

Here Come Tha Police is catchy and funky and expands our knowledge of the characters. We find out they are both musicians from a small town. They like to cruise and play music loud and raise the ire of the "men in blue." As much as the song seems to celebrate these times, the next song longs for a place where there'll be "no more hiding from the police / no more hanging on these dead end streets." Thus, Under California Skies is a lush pop number about that hope-filled time in a relationship where you believe everything could be forever perfect under the right circumstances.

After this trilogy of positive songs, the wheels begin to come off for the final three. Truth Or Dare already sounds regretful, even though things are just beginning to go wrong. Appelwick's narrator just wants to kiss, but Jenny likes the danger: "I say spin the bottle / And you say truth or dare."

The spacey, piano-driven Castaways brings that danger: "The sea turned green with jealousy / And the waves crashed down and the oceans heaved / And our little boat struggled to keep itself afloat." Jenny is described as a "detention kid known for her bad behavior" which may account for the problems that have arisen.

Finally, the title track suggests that our narrator just can't keep up with Jenny and her internal struggles anymore. He compares her to a butterfly (which harkens back to a line in the opening tune), a beautiful creature that never stays in one place for long. This makes the line "I swear to God I'll stop your bleeding / if you can keep your wings from beating" that much more heartbreaking.

Filled with little connections like that, this is one of those rare concept albums that actually hangs together while still allowing the songs to stand alone. In a recent interview, Appelwick claimed that's why he kept the CD so short; it clocks in at about 34 minutes.

No matter how long, it's a great accomplishment.

Antonio Hicks said…
I was just browsing various blogs as I was doing a search on the word poster, and I just wanted to say that I really like what you've done with your blog, even though it wasn't particularly related to what I searched for. I appreciate your postings, and your blog is a good example of how a blog should be done. I've only just recently started a Posters website - feel free to visit it when you get a chance if you wish. Much success, antonio.
2:35 AM