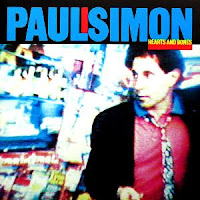 In the grand tradition of singer-songwriter divorce albums (Imperial Bedroom by Elvis Costello, Shoot Out The Lights by Richard and Linda Thompson) comes Hearts And Bones. (This is actually Simon’s second divorce record; the first was Still Crazy After All These Years.) Originally begun as a Simon & Garfunkel reunion record after their triumphant 1981 return, things quickly soured. Art's vocals were erased, the album went out as a Simon solo project and promptly crashed and burned, commercially speaking. Too bad. Listening to the record, it's somewhat hard to imagine as a S & G effort, the songs are so personal. Ironically, had it been released under the Simon & Garfunkel name it probably would have been a massive hit.

Being a divorce album the theme is, of course, heartbreak and loss. Allergies opens the album with the buzz of technology (robot voices!) and big drums. Simon likens the falling in love to an allergic reaction. After two divorces it seems he was tired and worn out, but humor shines through on the great line: "It's a question I often repeat / where do allergies go / when it's after a show / and they want to get something to eat?" It's difficult to imagine where Art Garfunkel harmonies fit into a song like this.

When Numbers Get Serious, Song About The Moon, and Cars Are Cars are all bouncy tunes that stretch metaphorically. They are respectively about divorce settlements, writing about your pain, and wishing for simplicity.

There are two songs called Think Too Much, (a) and (b).  In fact, Think Too Much was the original name of the album. (b) has a slow African groove and is about the overanalysis one goes through following a love affair gone wrong. (a) is the faster, catchier sibling. Nile Rodgers (of Chic, Madonna, and Duran Duran fame) plays guitar on this dance number about letting go of your thoughts ("Have you ever experienced a period of grace / when your brain just takes a seat behind your face?")

But the album really gets down to brass tacks with a trio of songs that led me to the statement above about this album having great commercial potential as a Simon & Garfunkel product. Simon's writing is in fine form on Train In The Distance, Rene And Georgette Magritte With Their Dog After The War, and the title track, and Art's harmonies (or even lead) would have suited them perfectly.

Train In The Distance is a grass is always greener rumination on Simon's first marriage. According to the very autobiographical details of the song, she was married when they first met, and he continued to pursue her. But after he won her over and they began their life together, things went wrong. The metaphor of the title is apt. Hearing a train whistle far away might bring up a feeling of comfort, like things are going as they should, but compare that with a noisy freight train rattling past your window. It's not so great.

Rene And Georgette... first seems like a thematic oddity, a song about the painter and his wife listening to '50s doo-wop music (the song also adopts that musical style for itself). But the bridge gives it away: "Side by side / they fell asleep / decades gliding by like Indians." It's about a lifetime love, one Paul obviously admired, but also felt was beyond his reach at the time.

Finally, Hearts And Bones sums up Simon's marriage to Princess Leia, wherein the couple falls in love, runs into trouble, then splits to "speculate who had been damaged the most." It's the kind of story song Simon excels at, and is very sad. My question is, if you were involved with someone, would you want a song like this written about you? On one hand it would be kinda nice to have inspired such beauty, but on the other hand, it has to cut a little to know that you can't express your side of the story in anywhere near such an elegant fashion.

The album ends with The Late Great Johnny Ace, a meditative number that has absolutely nothing to do with the album's theme (save the idea of loss). It's Paul's tribute to both the title figure and John Lennon (who was killed in 1980). It's a little belated, but Simon didn't put out an album in those four years.

Though it's sad to see an album of such great quality go underappreciated, Paul got his commercial revenge two years later with Graceland.

Rating: A
Fave Song: Think Too Much (a)

sexy said…
This comment has been removed by a blog administrator.
8:20 AM