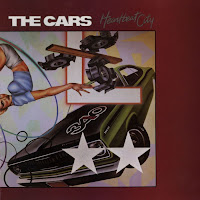 Heartbeat City was The Cars' fifth album and the blockbuster hit of their career. In overview, The Cars could be fairly summarized as a singles band. This means that they made better individual songs then they did albums, not that their music is especially appealing to people that are uninvolved romantically.

With 5 of the songs on Heartbeat City serving as singles, that gives them great odds that the album was going to turn out good by default. And it is!

The Cars always had an infectious sound. The combination of the warm, complex, keyboard-dominated music with the detached alien yelp of singer/songwriter Ric Ocasek gave them an upper hand on many bands. Putting them with uber-producer Robert "Mutt" Lange, well known for his meticulous, layered approach, was a dangerous move. Really, how many layers does a song need? But the pairing paid off; Lange seems to have simply added sheen to the band's approach. (In fact, Ocasek must have been inspired: Though they didn't work with Lange on their next release, the single Tonight She Comes, they still spent 4 weeks getting it right.)

The singles are humdingers. Magic is a giddy pop song in the tradition of giddy pop songs with "magic" in the title (America, The Lovin' Spoonful, Olivia Newton-John). Hello Again is a strangely melancholy greeting in the tradition of strangely melancholy "hello" songs (Neil Diamond, Lionel Richie, The Beatles). You Might Think is the OBVIOUS HIT, three minutes long and containing approximately 15 separate hooks (that's five hooks a minute). I lament that pop songs this naturally good are the exception rather than the norm these days. Drive is a sensitive ballad sung by bassist Benjamin Orr. All the girls swoon on this one, but like Every Breath You Take, which sounded like a love song but wasn't, this song is actually about a girl who people have had it with. Finally, Heartbeat City (originally called Jackie, you can tell from the way Ocasek says the name) shows how to use synthesizers correctly (along with layers of background vocals and understated guitar). It's evocative.

The five non-singles don't have a stinker in the bunch. Looking For Love has that Motown spirit. Stranger Eyes, I Refuse, and It's Not The Night are all catchy enough to keep things moving along. But the superstar of the bunch is Why Can't I Have You, a majestic icy/hot ballad of longing. Many have speculated about how gangly, goofy Ric Ocasek ended up married to the super-hot Paulina Porizkova. Some might say money, but I like to think she just saw him perform this song, and that did the job of winning her over.

The album's cover is a 1972 painting entitled "Art-O-Matic Loop Di Loop." It features a Plymouth Duster, various flying car parts, and a flexible, buxom woman with a sinister look on her face. It definitely captures the album's Pop Art sensibilites (Andy Warhol even directed a video for Hello Again).

Anonymous said…
The film clip which Andy Warhol produced (I assume you're referring to "Hello Again"), he actually appeared in as well.
11:47 PM