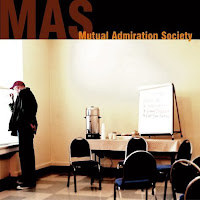 From the curiosity department:

Mutual Admiration Society (MAS) is a musical Frankenstein with the body of blugrass trio Nickel Creek and the head of Toad the Wet Sprocket (lead man Glen Phillips). What mad scientist dreamed this up? What was the intention behind it? Was it for art's sake? Or are there plans to unleash it and attempt world domination?

Disregarding questions about its origin, the album is a surprise in a few ways. For one, it's not as twangy as you'd expect. This is a mostly quiet, ponderous set, and the Nickel Creekers' contributions are quite subtle and understated. In fact, it's almost like a Toad album with a bit more mandolin, fiddle and harmony.

There are 11 songs. Two were written by Sean Watkins (the pretty La Lune and the instrumental Reprise), three are covers, and the remaining six are Phillips originals. Of these, it's perhaps not coincidental that the two standouts are the two sole uptempo tracks on the record, Sake of the World and Be Careful. The other four, as mentioned above, could have easily slotted into a Toad album like Pale; they're slow and a bit aimless, but cast a light spell nonetheless.

The covers are more interesting. One, Trouble, is a Jon Brion tune from his self-released 2000 album Meaningless. (In case you don't know Brion has produced and written with lots of artists, including Fiona Apple and Aimee Mann.) The group displays great taste not only in choosing this song but also in sticking with the original arrangement. Phillips' voice is better than Brion's so that's a plus for this version; the minus is the fact that Brion's lyrics are so focused and wry that they create a sharp contrast to the other songs on the record, which tend to be more lyrically obtuse and earnest.

The other covers are a Harry Nilsson tune (Think About Your Troubles) and a new version of Toad's Windmills (from my personal fave Toad album, Dulcinia). What strikes me about the latter is that given a chance to do something dramatically different with the arrangement, MAS chooses not to. Instead, the song is almost exactly like the Toad version, but with a bit less production and a bit more harmony. It makes me wonder why they did it at all.

And that's kinda how I feel about this whole project. Yeah, there's nothing wrong with it, but I still wonder why it happened. Adding to this is the fact that the album isn't even fresh: the liner notes say it was recorded over six days in 2000. Think about that! Several bands have come and gone since then!

Even more damning is the package design. It seems to have been created without the input of the artists by someone who didn't listen to the record. The cover features a man (none of the band members) looking out the window of a meeting room. There are coffee and donuts on the table, as well as an agenda. I suppose it's a play off the band's name (get it, a mutual admiration society meeting where only one member shows up?). It's mildly clever, but doesn't suit the mood of the music one bit. This bothers me.

So in the end, MAS is a pretty little album of very little consequence. It's really hard to hate but equally difficult to get excited about. In other words, a curiosity.

Rating: B-
Fave Song: Be Careful