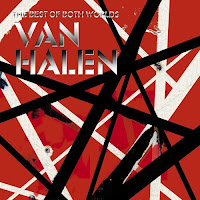 I detailed the history of my relationship with Van Halen fairly extensively in my review of Van Halen 3 back in February. At the end of that piece I mused about how great it would be for Sammy and the band to reconcile and that I'd be there for it if it happened. Well, it happened, and keeping my promise, here I am.

To coincide with their current tour with Sammy, the band have released this two disc retrospective, bolstered by three new studio tracks by the mighty Van Hagar. This is a great title: The Best Of Both Worlds. Of course it's one of their song titles, but it also plays off the "best of" idea as well as the fact that there are two singers (worlds) represented. The artwork is also great, basically a recreation of the Frankenstein guitar that Eddie made so famous in the early years. The inside features new photos of the band with Sammy, which is a little odd, but cool to see.

Okay, so there are a lot of fun subplots to discuss here, mostly involving the tracklisting. You may recall that the straw that broke Van Hagar's back originally was an argument over Best Of, Volume 1. Reportedly, Sammy didn't want to put it out. He didn't want his songs next to David Lee Roth's, or to be underrepresented. But that's exactly what ended up happening, with Roth getting 10 songs (including two new ones) to Hagar's 7. Sammy came off looking like a jealous second husband.

It's not a surprise that Sammy wins the battle here. Twenty of the 36 songs are Van Hagar. The curious part of this is that instead of separating the singers into Disc One and Disc Two, the collection mostly alternates between the two in no discernible order. First a song with Dave from 1984, then a song with Sammy from 1991, then a song with Dave from 1978, and so on. But it's not consistent; at the end of disc two we get two Sammy, then two Dave. It's so strange. It's like I took all 11 VH discs and put them in a changer on random, and only the hits came up.

The company line on this will probably be that the band were looking to create a flow for the listener, but I wonder if there isn't something else at work. As far as I can figure, maybe Sammy was afraid that an all Roth disc would completely blow away an all Hagar disc. But is he really that insecure? He should take heart: Maybe the wife has fond memories of husband number one, but she's married to husband number two. He has already won the war.

I'll admit my bias: I prefer Sammy over Dave. Not by any great margin, but I do. And thus I believe a Van Hagar disc would have been just as enjoyable as an all Roth, if not more. But really, what would have been the most preferable for me is a simple Best Of, Volume 2. There were plenty of great songs (even hits) left off of the first one, and you could have thrown the new songs in at the end. Of course that wouldn't make as much money, but here's what it might have looked like:

That would have been art, man!

Okay, order (and fantasy world) aside, here are some thoughts on the tracks themselves:

For the most part I have very little qualm about the tracks selected. Nearly every notable Van Halen song is here, and I can't blame the band for choosing to pretend that Van Halen 3 never happened. Here are some favorites of mine: I'll Wait is a gem from the 1984 album. It's totally uncharacteristic of the band, and sounds like a lost new-wave hit from an obscure British synth-pop group. There's (gasp!) no guitar on it. Likewise, the band's 1982 cover of Dancing In The Street is an unconventional treat. It's got two things you don't tend to associate with VH: great background vocals and a smokin' groove. I'll go out on a limb and call it my favorite version of the song (over the original and especially over the Bowie/Jagger edition). Finally, I've got to give props to Love Walks In, a wonderfully strange power ballad that I once tried to base a novel on. I'm only slightly embarrassed to admit that.

However, I will complain, and to anyone who'll listen, about the three live tracks at the end of Disc Two. I'd like to pretend that the completely lackluster live album Right Here, Right Now doesn't exist, but yet here the band tortures me with reminders. If they were intent on including something from it, why not the Who cover Won't Get Fooled Again? Instead, they have now twice preserved in plastic Sammy's inane musings during the instrumental break on Panama. I've transcribed his soliloquy for your enjoyment:

"Yeah, that's right. I'll tell you, we've been looking forward to this show. We were off last night sittin' around here in Fresno with nothin' to do, so was all I was doin' was thinkin' about tonight, you understand. That's what happened: Was when I was busy thinking about tonight, the boys in the band were having a party over at the hotel. They had about 15 fucking chicks up there and I was sittin' in my room watching T.V. (pause) If that ain't a bunch of bullshit I don't know what is, you know. See the problem is, is I learned my lesson real quick because I was worried about tonight last night. Last night I should have been worryin' about last night. And the night before that I should have been worryin' about that night. Because worryin' about tomorrow is a bunch of shit. 'Cause tomorrow may not never come. Tomorrow? There's no guarantee about tomorrow! Fuck tomorrow! (pause for audience applause, mostly at the use of the f-bomb) You dig what I'm sayin'? And yesterday, shit. Yesterday, that's history, that's dead and gone. Yesterday ain't worth nothin'! That's gone, man! 'Cause all you got to worry about is right here, right now."

I hope you're still reading.

As for the new songs, they tend to sum up Van Hagar in three fell swoops. It's About Time is the mindless catchy rocker, Up For Breakfast is the innuendo and entendre-filled rocker, and Learning To See is the rocking power ballad. Almost every Van Hagar song can fit into one of these categories. Yet, musically, the band continue to define the sound they began on Van Halen 3.

I said in my review of that album that the more experimental nature of the music could have benefited from the pop sensibility Sammy's melodies would bring. That's exactly the case here; the songs are heads above anything Cherone would have come up with. Still, it's surprising that the band didn't go for the traditional all-out commercial appeal, especially considering how many other concessions have apparently been made for money's sake. Eddie's solos have never been conventional, but he sounds like a mad scientist here, even on the sensitive Learning To See. It's light years away from something like the clean-picked blues guitar of Finish What Ya Started. I'm almost inclined to call these songs artistically forward-looking, as strange as that is to say about Van Halen.

Final verdict? Any true VH fan will buy it for the new songs. Any casual fan would probably still be content with Best Of, Volume 1, but this collection is very worthwhile for someone getting into the band and willing to spend a little more cash. What is of more consequence to me is this: Will the reunion stick? Will we see a new Van Hagar studio effort? I really hope so, and guess what? I'll be there.

Rating: A-
Fave Songs (one from each singer): I'll Wait / Can't Stop Lovin' You

David James Dixon said…
Dude I personally love the live songs your just a stuck up bitch, and I agree with Hagar.
There's no guarantee about tomorrow! Fuck tomorrow! And yesterday, shit. Yesterday, that's history.
1:14 AM

Paul V. Allen said…
Is everyone who disagrees with you about the quality of songs a "bitch"? That's an interesting way to approach the world.

Anyway, I'm not saying that Sammy's monologue doesn't have truth in it, just that I don't care to listen to it over and over again in the middle of a song.
9:53 AM