The Darkness - "I Believe In A Thing Called Love" 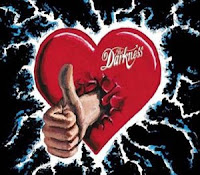 Listening to music is an obsessive thing. You might get really stuck on an album or an artist, but in my experience the most prevalent objects of obsession are songs. Isn’t your life littered with songs you just couldn’t get enough of, that you played incessantly and got stuck in your head for large portions of the day?

Like most obsessions it isn’t necessarily healthy, but it sure feels good.

No matter how advanced our methods of experiencing new music become, that obsession will always be one of the primal thrills of music consumption. Honestly, it doesn’t happen to me much anymore. Maybe I don’t listen to the radio enough, or I’m too jaded to open my heart and mind to new sounds.

The Darkness have changed that!

I Believe In A Thing Called Love is a big old slice of cheese from the U.K. Dressed up in Def Leppard- style guitar bombast and Queen-style vocal bombast, it brings back a time when metal and pop were still together and pop had a little more say in the relationship. I’m obsessed with this song. It gets stuck in my head, I listen to it three or four times in a row in one sitting, and it makes me want to play air guitar. I can’t take those things for granted.

I believe The Darkness will inspire quite a bit of dislike. Some won’t like the lead singer’s voice. Others will be deterred by the sparkly, too revealing bell-bottom singlet he favors. Still others will worry that it’s just a joke that’s going to eventually get old, that the lack of subtlety in the lyrics and the over-the-top theatrics just aren’t built for longevity. I must admit that this latter concern nags at me, and is the reason I still haven’t purchased the album (thanks to iTunes I could download this song and still respect myself in the morning).

But none of that really matters when you’re obsessed. You might be hanging out somewhere and see a hot girl and get obsessed with her, and you don’t have to know anything about her personality or family or friends. You can imagine all of that, the important part is the feeling she inspires, however brief.

Album: Permission To Land (2003)
Fave Moment: The breakdown at the end where the guitars drop out briefly, only to roar back to life.