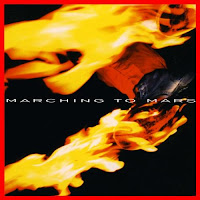 I’ve been waiting for something special to occasion my 30th review, and the news that Sammy Hagar and Van Halen are back together is very special indeed. In fact, check out the February archives for some quite detailed expressions of my feelings toward the band.

In honor of this long hoped-for development I dusted off my copy of Sammy’s first post-Van Halen solo album and gave it a spin. I was immediately struck by how much the songs have to say about his departure from the band. When the whole debacle went down I tended to side with the VH camp, but time has shown me that maybe Sammy’s side was closer to the truth (consider that VH have now run through three lead singers, two of them twice…they’re like your friend who keeps breaking up with boyfriends and at first you sympathize with her and then you start to realize that she’s more of the problem than she’ll ever admit). Looking at the album with that point of view it becomes that much more interesting.

The songs that may or may not be about VH range from pissed off to sadly resigned in tone. The bitter ones come first. Little White Lie opens the album with a blusey warning that your untruths will “come back to haunt you,” and seems pointed directly at the Van Halen brothers’ numerous post-Sammy interviews. The very next song, Salvation On Sand Hill, is quite cryptic but could be interepreted as a cautionary tale about getting involved with people who aren't out for your best interests.

The most cutting jab is a funky number called Would You Do It For Free. Again looking Eddie Van Halen straight in the eye, Sammy asks the title question: What’s more important you, money or music? For Eddie, who prides himself on being a musician rather than a rock star, it must have stung a bit. (But it begs the question, is Sammy donating all of his money from the upcoming reunion tour to charity?)

But the album isn't all bitter pills. Leaving the Warmth Of The Womb shows some genuine regret and sadness about the whole VH affair. Sammy asks "why doesn't love take you anywhere?" and they seem like the words of a man who feels betrayed by people he really cared for. Even the title seems to refer to the coldness of being solo after being in a hugely popular band.

Finally we have Both Sides Now, a soulful standout track that extols the virtues of empathy. Sammy claims to be able to see both sides of a story and there's a scent of forgiveness in the air. It showed, even back then, that maybe the door to a reunion was still slightly open.

The other songs on the album are more than servicable. There's a touching ode to Sammy's then-baby daughter (Kama) and the joyous title track. Other songs touch on drug-induced revelations and abortion. Overall, in the battle of who could put out a better post-Van Hagar album, Sammy won hands down.

In conclusion, let's return to Both Sides Now. The song contains several of Sammy's trademark metal dude nuggets of wisdom, and one of them goes like this: "love's an hourglass / it goes out wide and comes in close." As awkward as that is from a poetic standpoint, it's certainly applicable to this whole roller-coaster Van Hagar affair. I, for one, couldn't be happier that things are coming in close again.