August 02, 2010
"If you only own one album by Elvis Costello it's gotta be [insert masterpiece here]."


According to the critics and fans, Elvis Costello has four perfect albums. And he made them all in a 5 year span, between 1977 and 1982. Were I Elvis himself I'd be flattered and depressed at the same time. Flattered, of course, to have my work so highly regarded. Depressed because none of the approximately 623 albums I've made since 1982 are anywhere near as loved.

So how do we determine which is best? Simple math. We look at the percentage of Amazon.com raters giving the albums the full 5 stars. The winner then emerges, with This Year's Model sporting a staggering 96% of reviewers bestowing it with 5 stars. 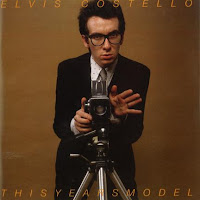 This Year's Model marked the debut of Elvis' beloved backing band the Attractions (Steve Nieve, Bruce Thomas, and Pete Thomas), who immediately made their value known, especially Nieve, whose organ provides the album's signature sound. The Thomas brothers' rhythm section is no slouch either. The album features the Elvis classics Pump It Up, (I Don't Want To Go To) Chelsea, and Radio, Radio (originally a single-only release, added as a bonus track).

The All Music Guide's Stephen Thomas Erlewine labels the album "reckless, careening, and nervous." But he's a big fan of the  chaos, declaring, "Costello and the Attractions never rocked this hard, or this vengefully, ever again."

The fan reviewers on Amazon.com were similarly adoring. M.Packham declares This Year's Model "The Best Costello Has to Offer." Jeremy Young opines: "Who needs Elvis impersonators? The real Elvis is alive on this album, and he has never sounded better." One anonymous reviewer asks, "Has there ever been a better pop album released?" If he meant that rhetorically then the answer is no, but if it's a direct question then the answer is yes. And another nameless, faceless fellow claims, "No less so than Beethoven's Fifth, it states its theme squarely at the start and only builds -- dizzyingly and ecstaticly -- from there."

I could go on and on, but I noticed an interesting trend in some of the reviews. Check out these comments and see if you pick up on the pattern. Amid a passionate love letter to This Year's Model, Itamar Katz says the album is, "Not as tight or melodic as the classic follow-up Armed Forces." G. Moses reveals, "My favourite Costello album still has to be Armed Forces, but this is almost as breathtaking." And Bradley Jacobson recommends that after hearing This Year's Model, you proceed to "what will probably be my favorite Elvis album Armed Forces."

So, um, if three separate reviewers mention the superiority of a different album in the course of praising This Year's Model, doesn't that hurt its Rock Solid case just a little bit? I'd say so. And while This Year's Model's well-crafted consistency is hard to deny (every song is damn good; the only thing I don't like on the whole album is the chorus of Livin' In Paradise which wanders a bit too far into American bar band territory), I'd rank it lower than Armed Forces, mainly because the latter was such an artistic leap. For all of its energy, This Year's Model has a sameness of sound throughout. Armed Forces has a much more open and sophisticated feel; listen to the expansive opener Accidents Will Happen next to The Beat for an example of what I mean. Nieve has traded in his organ for a piano, and Elvis shows some range and subtlety in his singing, instead of spitting out his lyrics like he's trying to get rid of them.

And while the ultimate moral of this Rock Solid is that you really can't go wrong with any Elvis disc released between the years 1977 and 1982 (okay, Almost Blue, a country covers album that's better in theory than actuality, can probably be skipped), none of those 6 great albums is my personal favorite. No, that'd be 1986's King of America. Click on the link for a justification of that pick, plus a prescient discussion of which Elvis albums are the best.

Unknown said…
I really enjoy your blog, and felt the need to comment because I am the Jeremy Young you quoted from my Amazon review of this album :-)

Just a minor correction - you refer to the "Thomas Brothers", but despite their common surname, Bruce and Pete Thomas are no relation.

While Armed Forces is arguably more polished and mature, I feel that in some parts it's overproduced (Green shirt, which I think is much better in its stripped down version on this album as a bonus cut).

But I also have a soft spot for King of America too, which is amazing and was my first EC album purchase after the best-of.

Paul V. Allen said…
Thanks for the kind words Jeremy!

I know Bruce and Pete aren't brothers. I thought it was a cute way to describe them, but didn't think about how it might lead to confusion.
7:40 AM

Paul V. Allen said…
Oh, and as an Elvis fan you might be interested in this review from a couple of years ago:

Uncle E said…
I dunno. For the longest time Armed Forces was my fave Costello album, but recently (the last couple of years)I have been blown away time and time again by the raw sound of the debut. As you say in your allmusic quote that "Costello and the Attractions never rocked this hard, or this vengefully, ever again." Well, I'm of the opinion that Costello never made an album as honest as My Aim Is True again. Yes, I know it didn't have the Attractions, but that doesn't bother me.
Now, that being said, Armed Forces does contain my favorite Elvis song, in Accidents Will Happen. Great post, again!
10:08 AM