August 21, 2010
"If you only own one album by Bruce Springsteen it's gotta be [insert masterpiece here]."

Here are the top 8 Bruce Springsteen albums according to fan and critical acclaim: 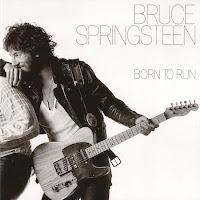 Only the top two received perfect ratings from both the All Music Guide and Amazon.com reviewers, and Born to Run unsurprisingly took the top spot with the most 5 star ratings on Amazon. But that's not the real story to me. Nor is it the surprisingly high ranking for The Wild, the Innocent, and the E Street Shuffle. The real story is that these top 8 albums are also the Boss' first 8 albums. None of his work since 1987 cracked the list. Consider that for a moment.

Now here's where we could have a very interesting and lively discussion about career trajectory and the fact that nearly every established, successful pop artist's career follows a predictable path in terms of critical (and to a certain degree public) perception. It goes something like this: 1) Artist spends a couple of singles, EPs, or even albums working out their sound, 2) Artist puts it all together, beginning a golden period, 3) The first album to truly disappoint arrives, ending the golden period, and 4) Every subsequent album is a (mostly or partially) unsuccessful attempt to recapture the golden period.

Now there are a lot of subtle variations to this, but it basically holds true for any artist you want to slot in. The big question is: Why? Is it just another manifestation of our build-them-up break-them-down culture of celebrity? Probably. But is it also that rock is an inherently ageist medium? For all the honoring of rock's elders, it is the rare older musician who's beloved for more than nostalgic reasons, who is still regarded as artistically vital. Is this fair in any way? Probably not.

In the case of Springsteen, the 1992 double shot of Lucky Town and Human Touch signaled his first disappointing moments (Tunnel of Love was a commercial but not artistic disappointment, only because it followed the ridiculously successful Born in the U.S.A.; more on that later). He's never truly pleased the critics since. Even the praise for his "comeback", 2002's The Rising, was couched in the fact that he was writing new songs that sounded like his old ones.

But I digress. Let's move on and revel in the golden period, the height of which is the album that made the Boss the Boss. William Ruhlman of the All Music Guide writes in his 5 star review: "Born to Run was an intentional masterpiece. It declared its own greatness with songs and a sound that lived up to Springsteen's promise, and though some thought it took itself too seriously, many found that exalting." This latter statement brings up an important point. To whit, Chuck Klosterman took some of the air out of the the Boss' poetic aspirations in an essay in his book Sex, Drugs, and Cocoa Puffs:

"But what nobody seemed to notice is that this song [Born to Run] has some of the most ridiculous lyrics ever recorded. Half the time, Springsteen writes like someone typing a PG-13 letter for Penthouse Forum: The lines "Just wrap your legs 'round these velvet rims / And strap your hands 'cross my engines" are as funny as anything Tenacious D ever recorded, except Bruce is trying to be deep."

So the point here is that liking Bruce, and Born to Run specifically, requires a suspension of cynicism. You have to be willing to give yourself over to the dramatic grandiosity of it all. The reviewers on Amazon.com certainly are, indulging in purple prose that Bruce himself would be proud of.

M.J. Heilbron Jr. writes: "The cinematic sweep, from Thunder Road to Jungleland, makes you feel like you're watching a movie while listening. The epic nature and true storylines makes you feel like you're reading a classic novel. I ask you, what album have you ever listened to, that elicits a sensation of music, film and literature simultaneously? It's breathtaking." Thomas Emanual follows that train of thought when he says, "The Great American Novel is the book, better than any other, that perfectly embodies the essence of America and American life - its hardship, its joy, its defeat, its triumph. You can think of Born to Run then as the Great American Album." And J.H. Minde adds, "It's hard...to adequately measure the impact this album had. The changes it wrought in the young people who first heard it were very nearly on the cellular level (that's biology, not telephony, you 21st century yahoos!)." Finally, an anonymous contributor tells us that, "The album Born to Run is brimming with bombast and sorrow, celebrating the plight and fortune of man, with a defiance rarely heard."

Other reviewers keep things simpler but no less laudatory. Spanish Johnny declares Born to Run "the most exhilarating, most complex recording of Springsteen's distinguished career." "You can hear rock being reinvented and revisited all at the same time, all in one listen, " says Peter Guglietta. Craig Paul opines, "I can't imagine anyone not owning this recording." And, Bruce (hmmmm...) tells us: "Stated simply, this is the best rock and roll album ever recorded."

Well, is it? In short, no. Let me start by saying that I listened to Born to Run for the first time for this article, and that colors my perception. There are songs (namely the title track and Thunder Road) that I've heard hundreds of times, others that I've heard a handful, and still others that I'd never heard. Thus it's very different listening experience than it was intended to be. Even so, some songs naturally stand out over others.

Of course, there are the hits. Well, technically, the title track is the only one, and even that only made it to #23 on the U.S. chart. It's more of a hit-in-retrospect, to the point that it's been way overplayed. Even so, it's the one Bruce will be remembered for. And if you can resist the ending, where things come to a halt, Bruce counts off, the band rushes in, and "The highway's jammed with broken heroes on a last chance power drive" then you're a better person than me. The R & B workout Tenth Avenue Freeze-Out was a single, not a hit, but is nonetheless a concert favorite. So we'll throw that in. And opener Thunder Road was neither a single nor a hit, but still is a classic, and made it on to 1995's Greatest Hits.

Other tracks have varying levels of impact. Backstreets builds up a good head of steam, She's the One has a funky core, and album closer Jungleland is an intriguing, evocative epic. However, Night does little to distinguish itself, and Meeting Across the River has an interesting story-song lyrics that are nearly ruined by an overdramatic and dated arrangement (on later albums, like Darkness on the Edge of Town and Nebraska, Bruce would master the art of keeping it simple).

Quibbles aside, and disregarding the fact that Born to Run isn't Springsteen's most successful album (Born in the U.S.A. went 15 times platinum and produced 7! top ten singles), the album is a solid choice for his best. Not only because it made a bold, unified artistic statement, but because it had a magnificent cultural impact. Born to Run made the world sit up and take notice. It made the Boss the Boss. Other Springsteen albums might be as strong or even slightly stronger, but none had the same impact.
My own personal fave is Tunnel of Love, an E Street-free (well, at least as a unified group; various members still contributed) concept album that tackles various aspects of romantic love. And though I could do without ever again hearing the title track in a department store, it's a haunting, beautifully-made record.