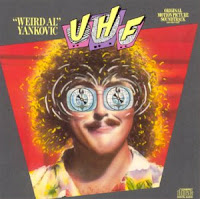 With four hit albums under his belt and a proven ability to make entertaining music videos, Al got the chance to write and star in his own movie in 1989. The result was the not-spectacular-but-very-watchable UHF (you can read my extended thoughts on it here), about a man who takes over his uncle's TV station.

Of course it came with an album too, but the strange part is that despite being called an "Original Motion Picture Soundtrack" only about half the songs actually appear in the film.

Song Parodies
Money For Nothing / Beverly Hillbillies is just what it advertises, the Clampett clan's TV theme song put to the tune of Dire Straits' 1985 hit. Reportedly, using the Hillbillies theme was an old idea of Al's. He'd previously done it to the tune of The Rolling Stones' Miss You, and tried to create a version based off Prince's Let's Go Crazy (Prince declined to authorize it, unsurprisingly). Speaking of authorization, Dire Straits maestro Mark Knopfler only agreed to let Al parody his song if Knopfler himself was allowed to play guitar on it. And so it went. The song had a blocky, computer-animated video, and actually appears in the film as a dream sequence.

On that same theme is Isle Thing, a take-off on Tone Loc's Wild Thing. Despite the fact that the song continues Al's obsession with marrying TV shows and pop music, it's actually one of his least conceptually obvious parodies. The lyrics concern a gravelly voiced young man who meets a fine young lady who loves to watch Gilligan's Island. Also of note: The song is Al's second foray into rap in as many albums.

And we're back into painfully obvious territory with She Drives Like Crazy, a rote take on Fine Young Cannibals' original (She Drives Me Crazy). It's the tale of a girl who's such a bad driver that she, "got her license from Cracker Jacks." Al does an admirable job approximating FYC singer Roland Gift on the verses, but on the chorus he sounds like a Muppet.

Finally, there's Spam, after R.E.M.s Stand. Though Al has said he had a great time deconstructing R.E.M.'s layered sound, he should have spent a little more time on the lyrics, which are about the joys of canned, processed meat (made in Austin, Minnesota). There's really not much of a joke there, at least not one that rewards repeat listens. This song would be more interesting if Al redid the lyrics and made them about e-mail spam.

Style Parodies
Generic Blues is one of Al's patented Crazy List songs, this time put to a typical blues backing. The formats compliment each other well as we learn that the singer was "born in a paper sack", had a father who was a waitress, and his hated by all of his brothers and sisters because he was an only child, among many other misfortunes. My favorite part is when Al urges his guitarist to "make it talk" and then tells him to "make it shut up" as the solo drones on.

The Biggest Ball of Twine In Minnesota is one of my very favorite Al songs, an epic story about a family's vacation to see the titular object. The song goes on for nearly 7 minutes without a chorus to speak of, but never gets tiring. Musically, it owes a huge debt to Harry Chapin, specifically 30,000 Pounds of Bananas, of which it is just shy of being a rip-off.

UHF, long one of my favorite Al originals also owes a dubious musical debt (this time to the guitar bit in The Jacksons' 1984 hit State of Shock, which Al did in polka form on Dare To Be Stupid). Despite that fact, it's a rousing, joyful ode to the power of television.

Film Clips
UHF requires a new, temporary category because it includes four bits take from the film in audio form. Ghandi II and Spatula City are a film trailer and commercial (respectively) that appear on the film's TV station and they work fairly well sans visuals. Fun Zone is an instrumental theme for a children's show on the station, and it really does sound like it could have been the intro to any number of '80s sitcoms/game shows/cartoons. Finally, Let Me Be Your Hog is a nonsense takeoff on The Stooges Let Me Be Your Dog.

Polka Medley
After an album off, the polka medley makes a return. But rather than take on the songs of the day, Hot Rocks Polka tackles the hits of The Rolling Stones (the name Hot Rocks comes from a title of one of their compilations). Here are the songs: It's Only Rock 'N' Roll (But I Like It), Brown Sugar, You Can't Always Get What You Want, Honkey Tonk Woman, Under My Thumb, Ruby Tuesday, Miss You, Sympathy For the Devil, Get Off Of My Cloud, Shattered, Let's Spend the Night Together, and (I Can't Get No) Satisfaction.

What The?!
Attack of the Radioactive Hamsters From a Planet Near Mars is a standard "wacky" track that follows in the footsteps of Nature Trail To Hell and Slime Creatures From Outer Space, and it does honestly sound like it could be the theme song to a weird B movie you come across on USA at 2 AM. But it falls in the "What The?!" category because it seems tailor-made for the film, and yet it's not in there. What the?!