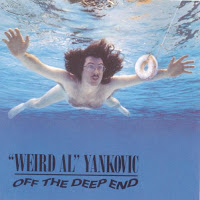 In my review of the UHF soundtrack, I forgot to mention that I didn't buy it when it came out. I saw the movie, but I didn't even think about the fact that it might have an accompanying soundtrack. 12-year-old Paul was not so quick on the uptake.

So in 1992 when I discovered there was a new "Weird Al" album, I couldn't have been more excited. It had been four years since Even Worse (the last new Al album as far as I knew), and a long four years at that. It was the difference between me being in 5th grade and me being a freshman in high school! Despite that, my love for Al was undiminished. In fact, "Weird Al" Yankovic on the Off the Deep End tour was the first concert I went to of my own volition.

But what about the album itself? Let's dive in.

Parodies
Smells Like Nirvana is Al's take on what would become the most influential song of the decade, Nirvana's Smells Like Teen Spirit (Off the Deep End's Cover also parodies Nirvana's Nevermind album, but thankfully Al spared us a dick shot). The point of the song is that Al is listening to Nirvana and can't understand the mumbly lyrics. It's nothing spectacular, and Al's off-kilter singing on the chorus shows that for all his musical talent, he wouldn't have made it in grunge.

I Can't Watch This finds Al going negative about his former flame: TV. Set to MC Hammer's I Can't Touch This, the song rails against the likes of Judge Wapner on People's Court ("You gotta be Rain Man to like this guy"), America's Funniest Home Videos, and cable ("just brainless blood and guts and mindless T & A"). It's clever enough.

The White Stuff, however, is not. I wrote earlier about how 99% of the time a parody of a bad song is going to also be a bad song, and this is proof. I'm not anti-New Kids on the Block by any means, but The Right Stuff was a frighteningly thin song to start with. Al makes it about Oreos, though his title leaves too much room for a dirty imagination. All in all, a low point. At least until we get to Taco Grande (after Gerardo's Rico Suave), an impressive bit of lyrical and vocal dexterity, but a bad song nonetheless. Cheech Marin makes a guest appearance as a Telemundo announcer.

Finally, there's The Plumbing Song, which may be Al's most bizarre parody ever. A mash-up (before that word proliferated) of Milli Vanilli's Baby, Don't Forget My Number and Blame It On the Rain, The Plumbing Song comes off as minimalist and oddly constructed, almost avant garde. Also strange is the fact that the band had confessed to being musical frauds at this point, and that Al didn't find it in him to at least put one lip synching joke in the lyrics. I guess he found his plumber jokes way funnier (I don't).

Overall, for me, not a great showing on the parodies, though I loved them all back in the day.

Style Parodies
Things start off with Trigger Happy, one of Al's best all-time style parodies. He takes the sweet harmonies of the Beach Boys and marries them to gun nut lyrics like, "there's no feeling any greater / than to shoot first and ask questions later." This could have gotten A LOT more political than it did, but his point is still clear.

I Was Only Kidding is a sort of new wave punk tune with funny lyrics about a man who has made grand romantic promises in jest. Though not a parody in the strictest sense, the song owes a very big structural debt to Tonio K.'s 1978 song H.A.T.R.E.D. (I didn't suss this out on my own. I saw it on Wikipedia and verified it for myself via YouTube. What did we do before the Interweb?).

Another indebted tune is When I Was Your Age, a Crazy List song that finds an old timer exaggerating his hardships (he had to eat dirt, swim in the septic tank, cut the lawn with his teeth, etc.). The inspiration here is solo Don Henley, specifically the tune If Dirt Were Dollars (Again, I needed help to figure that out.)

That leaves Airline Amy and You Don't Love Me Anymore as the only truly original originals. The former is sort of a Kinksish country rock tune. Lyrically it could be the blueprint for 80% of Fountains of Wayne's songs, concerning a fella mistakes a stewardess' professional attention for genuine affection. I appreciate it much more now than I did as a teenager. You Don't Love Me Anymore is a power ballad Crazy List song, naming the awful things the narrator's beloved has done to him (she disconnected his brakes, put piranhas in his bathtub, poisoned his coffee, etc.). The chorus is the punchline, and it's a pretty good one at that.