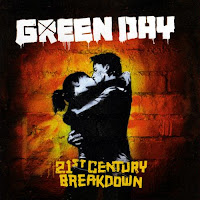 On the inside liner notes of Green Day's new album, 21st Century Breakdown, there's a graffiti portrait of the band accompanied by the words "The Class of '13". Believe it or not, 2013 is when Green Day will be eligible for induction into the Rock 'N' Roll Hall of Fame. Pointing that out might seem a bit presumptuous on their part, but as far as I'm concerned, they have nothing left to prove.

Consider that following their initial success (Dookie in 1994), they cemented their place in the public consciousness with the decidedly not-punk ballad Good Riddance (Time of Your Life). That song became the theme for a thousand proms, memorial tributes, and sitcom finales. Sure there was initial backlash, but once American Idiot showed up in 2004, all was forgiven. The album spawned three huge hits, and became the band's second best selling record. Not only that, critics and hipsters alike embraced the album. And, thanks to the political nature of the lyrics and the rock opera concept of the record, the group managed to simultaneously be taken seriously as artists and activists.

As such, no one would have really blamed them for putting out a plain old mediocre follow-up album. Certainly one wouldn't expect them to try to replicate or perfect the American Idiot formula. But that's exactly what they've done, producing another socially-minded rock opera, one that's even better than its predecessor.

Don't get me wrong, American Idiot was a good album. It took the rage generated by the Bush administration and made it danceable. In every way it represented a step forward for the band, and a few of its individual songs will live on as radio staples for as long as radio exists. But as a "rock opera" it was lacking. The story, about Jesus of Suburbia, Whatsername, and St. Jimmy, was indecipherable.

Believe it or not, 21st Century Breakdown is a longer record than American Idiot, but feels shorter and more streamlined. There are no 9 minute song suites or attempts at a linear story. Instead, the band settles for interwoven lyrical and musical themes, and two recurring characters called Christian and Gloria. The album is expertly sequenced, broken into three "acts", each one better than the last.

The album opens with Song of the Century, a scratchy a capella theme that lays out the album's big mission statement, namely saying eff-you to the illusions created by politics, religion and media. "Sing us a song of the century / Louder than bombs and eternity / The era of static and contraband / Leading us into the promised land."

Act I, Heroes and Cons, follows. It focuses mostly on the politics side side of the unholy trinity, though it also spends a fair amount of time contemplating Armageddon. The title song is one of the strongest on the album, with shifts in tempo and mood, and lyrics that read like a screed. Elsewhere, the characters are introduced, each in their own respective songs (Viva La Gloria and Christian's Inferno). Know Your Enemy, the first single, also shows up here. It's a fine song, but not much more than by-the-numbers Green Day. Before the Lobotomy sketches out a nightmareish dystopic future in the form of a power ballad. The lovely piano-driven Last Night on Earth has some strong melodic shifts and Beatley slide guitar; despite its title, it may be the most unabashed love song the band have ever written.

The appropriately-titled second act, Charlatans and Saints, focuses on organized religion. East Jesus Nowhere rides a rockabilly strut to a not-so-far-fetched tale of a religious military state. First there's the missionary statement ("join the choir, we will be singing / in the church of wishful thinking"), then the admonishment of dissenters ("don't test me / second guess me / protest me / you will disappear"). Those themes carry over directly into Peacemaker, a should-be future single. The song borrows a little bit from the Gogol Bordello playbook, with the minor-key fiddle and heavy high-hat, but that's not a bad thing.

Gloria gets her second theme, the bass-driven Last of the American Girls and we find out "she puts her make-up on like graffiti" to accompany "you blast your name in graffiti on the walls." A third theme shows up one song later (after the infectious Murder City) in the form of Viva La Gloria? (Little Girl). The song is a parade of religious imagery, with mentions of preaching to the choir, the salvation army, and an unholy sister of grace. Act II ends with Restless Heart Syndrome, an attempt to evoke Use Your Illusion-era Guns 'N Roses if there ever was one. The lyrics include "you are your own worst enemy / know your enemy" just to keep that sense of continuity going.

The final act, Horseshoes and Handgrenades, begins with a title song (the other two titles are lyrics in songs contained therein), and it's a doozy. Half playground taunt, half old man wisdom, the song is fast, harmonic, and manages to be prototypical Green Day without retreading already-covered ground. The song marks a more strident tone for the final third of the record. The Static Age maintains the energy, addressing the final piece of the puzzle (media) and how it promotes the other two: "Advertising love and religion / murder on the airwaves." There might be a little bit of curmudgeon creeping into that punk attitude, but it's hard to argue when the key changes and that surfy bit kicks in.

The next song marks the delivery of the promise of American Idiot's Boulevard of Broken Dreams. That song aimed to put Green Day in the same category as U2, and 21 Guns damn near does it. Epic feeling? Check. Weighty harmonies? Check. Reverby guitar? Check. Amazing vocal performance? Check. An hour after I wrote my initial notes for this review and earmarked this one to have huge hit potential, I heard it on the radio. Lyrically, the song is simultaneously an expression of extreme weariness and a call for peace.

If the album was a concert, 21 Guns would be the closer. The encore, American Eulogy, begins with a reprise of Song of the Century, which flows directly into Mass Hysteria. The boys' time moonlighting as '60s mod rockers Foxboro Hot Tubs shines through here, as one could easily do the mashed potato to this one. That segues into the Jam-ish Modern World. This section is sung by bassist Mike Dirnt, who acquits himself well. It's a thrill after a thrill after a thrill a thrill, and the band can do nothing but come down from there.

Luckily the last song is the perfect closer. See the Light strikes a hopeful note to end the record. There are a no answers to the ills described in the rest of the record, but a resolution to keep searching: "I just want to see the light," Billie Joe sings, "I need to know what's worth the fight." Fittingly, the song ends with the same piano notes of 21st Century Breakdown, bringing it all back home.

21st Century Breakdown may not achieve the same acclaim or ubiquity as its predecessor, but it won't be because it doesn't deserve it. In making the album, Green Day had nothing left to prove, except, apparently, to themselves. 2013 awaits.

Grade: A
Fave Songs: the entire Horseshoes and Handgrenades act

Allen Lulu said…
couldn't agree with you more.
http://septenary.blogspot.com/2009/06/reflecting-pool-green-day-21st-century.html
12:10 AM

Unknown said…
This cover is a quite similar to Snow Patrol (Eyes open) and My Chemical Romance (Three Cheers For Sweet Revenge)... I don't know why??
That is embarrasing!!!!
4:09 PM