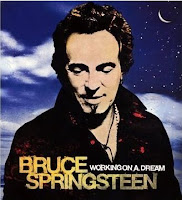 Has anybody else noticed the similar career paths Bruce Springsteen and Prince Rogers Nelson are on? Of course, the Boss emerged a bit earlier than Prince, but both ascended to the highest heights of acclaim in the '80s, spent most of the '90s on self-indulgent meandering, and rediscovered themselves in recent years. They've even both rocked the Super Bowl halftime show.

Bruce's comeback started with 2002's The Rising, an album that was thrilling, if a little full on filler. He took another couple of sidesteps with Devils + Dust and The Seeger Sessions, but came back strong in 2007 with Magic. That album found Bruce and the E Street Band fully embracing their past, writing and performing new songs that sounded like old ones. That continues on Working on a Dream, to a point.

One major difference between Prince and Bruce is that no one has ever been shy about admitting a Prince influence (Justin Timberlake alone owes his whole career to Prince and Michael Jackson), but that hasn't been the case with Bruce until recently. Then critics started noticing that indie darlings like Arcade Fire and The Hold Steady were showing more than a little Bruce influence in their wall-of-sound epics. Hipsters blanched, but it was true.

I can't help but wonder if this development has lit a little fire under Bruce. One need look no further than the opening song, Outlaw Pete for evidence. The song has garnered extreme reactions from critics and fans. I can see both sides. At eight minutes and one second long, it feels a bit indulgent, and the western tall tale lyrics are seriously silly (unless you believe an infant is capable of robbing a bank). But the song also manages to cast a spell, not only with Pete's tale, but musically as well. It builds, ebbs and flows, and actually justifies all 8 of its minutes. Either way you take it, it's the most ambitious thing Springsteen has done in a long while. And I have to point out that if Arcade Fire released this song, critics would be falling all over themselves to praise it.

Queen of the Supermarket is likely to create similar debate. A Brian Wilson-ish ode to a grocery store employee seems almost like a joke at first, especially when Bruce brings in a checkout scanner for rhythm. As I listen, I wonder what Bruce's point is. Is the song about seeing someone attractive and anonymous and developing a harmless crush as you wonder about their life, as you project perfection on them? Is it a glorification of consumerism? Is it a reminder to treasure the seemingly mundane aspects of life? The simple fact that the song elicits these questions is enough to make it my favorite on the album.

The rest of the record is populated with some of the most joyous songs Springsteen has ever written. Lucky Day is organ-driven pop love song featuring a trademark Clarence Clemons sax solo (there really aren't enough of them on the album). The hopeful Working on a Dream has that big Phil Spector wall of sound that Bruce put first forth 34 years ago on Born to Run. It's all "la-la-la" background vocals, whistling, and glockenspiel. This Life is Beach Boy-flavored like Queen of the Supermarket, but also recalls the rugged pop of the Magnetic Fields. The folky Tomorrow Never Knows lopes along. Kingdom of Days is perhaps the most unabashed love song Bruce has ever written: "And I count the blessings that you're mine for always / We laugh beneath and count the wrinkles and the grays."

But for such a swiftly-paced album, Working on a Dream contains many moods. Good Eye is a harmonica-driven swampy blues tune that sounds like little more than a fun exercise for the band to play live. Life Itself has a creepy, melancholy sound and mysterious lyrics that contrast sharply with the hopeful majority. Sample lines: "Why do the things that we treasure most slip away in time / Till to the music we grow deaf, to God's beauty blind."

The album ends on a similar downbeat. The Last Carnival is an elegy for Dan Federici, the E Street organist who died last August. Simple and effective, it compares life on the road to a traveling carnival, and ends with some nice heavenly harmonies. The album's final song, The Wrestler, evokes the spirit of the film for which it was written without being too literal about it. That makes Bruce three for three on soundtrack songs (Streets of Philadelphia and Secret Garden being the first two).

While not perfect, Working on a Dream is the best-sounding, most consistently enjoyable album Springsteen has made since, I don't know, Tunnel of Love? At this point in his career the Boss could simply settle for being a source of inspiration. Instead, he's obviously still inspired.

Grade: B+
Fave Song: Queen of the Supermarket

Allen Lulu said…
While I have gone on record as despising this record. (http://septenary.blogspot.com/2009/01/bruce-springsteen-working-on-dream.html) I have to admit that your take on Outlaw Pete is pretty dead on. If Okkervil River or Arcade Fire had recorded it, it would be heralded as a bold and triumphant approach and an audacious way to start the record.
I still think you and others have been too forgiving of this and the previous album. But that's subjective.
Good review.
11:12 AM

Anonymous said…
I go along with Allen. I find very little to like about that album.
4:20 AM

exile103 said…
You people are completely clueless, and obviously not all-time Bruce fans. This album is a throwback to his greatest works (read: pre-80's). A truly great album. Sorry for those of you wanting another lame Human Touch or The Rising. Snooze.
5:55 PM