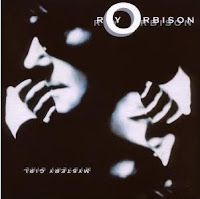 It was 20 years ago today. The Berlin Wall fell, Milli Vanilli won the Best New Artist Grammy, and The Arsenio Hall Show debuted.

Over the next few months, I'll be looking back at 5 seminal (well, depending on your definition of the word seminal) albums from 1989. Next...

Recently there was an article on Yahoo Music about musicians jumping the shark. Tellingly, none of the jump the shark moments on the list were actually musical. Instead there were things like: "Elton John gets a toupee" and "Bret Michaels looks for his Rock of Love." It was a flawed idea anyway: Musicians can hit Rock Bottom, as we've seen, but they never fully jump the shark. There's always room for a comeback.

(Now songs are a different story. Songs can and do jump the shark, usually because of overexposure or inappropriate use in media, or both. Thanks to Toyota, I could go the rest of my life without hearing Saved By Zero again.)

Roy Orbison had his own comeback in 1989, but it was actually a continuation of a comeback. The previous year he'd gotten together with Jeff Lynne, Tom Petty, George Harrison, and Bob Dylan as The Traveling Wilburys, and they struck a populist chord. Orbison went immediately to work on the tracks that would make up Mystery Girl, but he died in late 1988, before the album could be released.

As with the Wilburys project, Orbison surrounded himself with high caliber talent on Mystery Girl, including most of the Heartbreakers, and all but one of his Wilbury brothers.

Album opener You Got It is a mini-Wilburys reunion. Petty co-wrote the song with Orbison and producer Lynne, and one can't really argue with that team. They created an instant classic that deserves a place on any Orbison greatest hits list. It doesn't hurt that the song has a retro feel to it.

In fact, most of the album has that feel, from the '70s R & B horns of The Only One to the jangly California Blue (a song Chris Isaak would kill for) to the '60s pop of Windsurfer. But In the Real World wins the award as the most authentic sounding Orbison tune. A thematic follow-up to In Dreams, it finds Roy in fine operatic voice. Heartbreaker Mike Campbell produced.

The album's most intriguing song is not retro-sounding all. She's a Mystery To Me was written by Bono and the Edge and sounds like it. Though it works surprisingly well as an Orbison vehicle, one can't help but wonder two things: 1) What would a U2 version sound like, and 2) Does this girl who's such a mystery also move in mysterious ways?

Elvis Costello's The Comedians sounds tailor-made for Orbison, but one might not have guessed that from the original version that appeared on Elvis' 1985 album Goodbye Cruel World. That first iteration found the brief, elliptical lyrics (about hangers-on) overwhelmed by the musical accompaniment. The Mystery Girl version is almost a completely different song. Elvis wrote new verses, making it into a break-up tune, and the musical backing became a minimalist march. It's a dramatic improvement.

Not everything is so great. George Harrison shows up for A Love So Beautiful, a shmaltzy sort of ballad that goes too heavy on the strings. The T-Bone Burnett-produced rave-up (All I Can Do Is) Dream You goes the opposite direction, sounding out of place with the rest of the album.

But those are only small missteps. Overall, Mystery Girl was a comeback and a swan song all in one, and proof positive that you can never count a good musician out.

Grade: B
Fave Song: You Got It

Anonymous said…
I didn't like the album then (and DESPISED the Wilburys), and it was playing everywhere all the time while I was trying to navigate the really bad case of unrequited love. It may be a good album, but I hate it like I hate few other albums.
2:16 PM