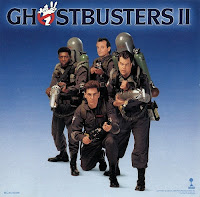 It was 20 years ago today. Saved by the Bell was just debuting on the airwaves, Tim Burton's Batman was the top grossing film, and there was a Bush in the White House (we thought he was pretty bad, but that was before we met his son).

Over the next few months, I'll be looking back at 5 seminal (well, depending on your definition of the word seminal) albums from 1989. First up...

1989 marks the year I first became completely susceptible to movie marketing machines. There was Batman of course. Everyone bought into that. But I was also hyped-as-I-could-be about Ghostbusters II. I remember discussing it with my neighborhood friends, pouring over the logo with the ghost holding up two fingers. I was all over the fast food promotions (little electronic noisemakers and 32 oz. glow-in-the-dark cups from Hardees). I had the movie poster on my wall. I saw it once, and then I saw it again. The second time I had lied and told my grandpa I hadn't seen it yet so he would take me; that has always weighed on my conscience a little bit. It was after that second viewing with my grandpa that we stopped in the record store and he bought me the soundtrack (on cassette, of course). I wore it out.

Looking at the album now, I'm struck by the stylistically diverse mix of artists on the record and how it remains cohesive despite that. It helps that save a couple, all of the songs have some sort of ghoulish bent to them.

Things start out with Bobby Brown's On Our Own, which was more or less the theme for the movie. And while Bobby is no Ray Parker, Jr., he does deliver a fairly memorable tune. The song, written and produced by L.A.Reid and Babyface, is a textbook example of New Jack Swing. It shot to #2, despite the goofy rap that recaps the film's plot ("Had 'em thrown' parties for a bunch of children / While all the while slime was under the building.")

Bobby offers a second tune as well, We're Back. Brown wrote and produced the song himself, and does a pretty good job. The lyrics are average, but the keyboard hooks are plentiful and the danceablity is high, especially if you know how to do the Running Man or the Cabbage Patch.

Strangely enough, Brown's former bandmates New Edition also appear. Supernatural was produced by Time drummer Jellybean Johnson so as you'd expect, it's highly rhythmic. As far as I can tell, it's about being in love with a woman who's really a ghost. But maybe that's just a metaphor.

James "J.T." Taylor, former lead singer of Kool & The Gang, offers up The Promised Land. It's a subdued (for the '80s, at least) tune addressing the ills of society. As I think about it now, it's very appropriate for the theme of the film, namely that people need to treat each other better. Fun Fact: So, folk singer James Taylor not only has an album called JT (thus making that quoted distinction useless) he also has a song called The Promised Land!

In the rap segment, Doug E. Fresh & The Get Fresh Crew offer up Spirit. Doug gets a little bit of beatboxing in on the bridge, but most of the song is comprised of a spooky keyboard and a rapped recap of the movie's plot, which is even more detailed than Brown's: "Now that evil's presence make it pleasant in every resident / and take a mother's newborn baby and Dana's the lady / to build an establishment for an evil magician on a mission in the picture position." Sure, it's silly, but it's all in good fun. The immortal RUN-D.M.C. also make an appearance, offering their take on the Ghostbusters theme. This one uses Ray Parker Jr.'s original as a base, beefing up the drums, increasing the tempo, and adding a skip-to-my-lou guitar backing. However, their rap is a tiny bit wack, especially when D.M.C. says, "They be dustin' off ghosts / Like true ghost dusters."

After 6 songs in the hip hop arena, you think you know where things are going, then suddenly pops up an Oingo Boingo song! Before you get too indignant, remember that Oingo Boingo were the kings of the '80s soundtrack. They had songs in Fast Times at Ridgemont High, Back to School, Weird Science, Sixteen Candles, Teen Wolf, Too, and Bachelor Party. Their song here, Flesh 'N Blood, fits the spooky mood perfectly. It's no surprise that band leader Danny Elfman eventually became the singing voice of Jack Skellington.

So we can understand Oingo Boingo, but how to explain the Elton John tune (Love is a Cannibal) that comes next? Well, I suppose the simple answer is that he was recording for MCA Records at the time, and that's who put out the soundtrack. The song, a musical descendant of Saturday Night's Alright For Fighting, would probably never make a list of memorable Elton tunes. And as I've said before, I always have a gitchy feeling about Elton pretending to be straight ("Woman is a criminal / Oh she got the hunger / Man is the animal"), but the song is catchy for what it is.

Continuing in a classic rock vein, next we have Glen Frey's bouncy-synth-and-squealing-electric-guitar opus Flip City. Though he had some luck as a modern '80s rocker on other soundtracks (Beverly Hills Cop and Miami Vice), it doesn't necessarily hold here. And it's weird to me to play this song next to say, Peaceful Easy Feeling, and realize it's the same artist.

The album closes out the same way the movie does, with Jackie Wilson's (Your Love Keeps Lifting Me) Higher and Higher. In the film, the 'busters use slime to animate the Statue of Liberty and subsequently broadcast this song to the angry people of New York, thus uniting them in a spirit of goodwill. Yes, the song is that good, even if the original version is replaced here by a synthtastic version by the womanly-voiced Howard Huntsberry. When I was younger, I couldn't get over the fact that it was a man singing.

Even 20 years later, I still hold a fondness this album. Now does that mean I'd recommend that you run out an buy a copy? No, I recognize that this is definitely a case where my nostalgia clouds my judgement. But sometimes, that's the way it should be.

Grade: B+
Fave Songs: Flesh 'N Blood and On Our Own