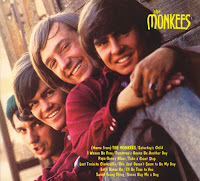 In the summer of 1986 I was 9 years old, and my mom shipped me off to Kentucky to spend two weeks with my grandparents. I was terribly homesick, and my mom tried to assuage this by sending letters and postcards. My step-dad also got into the act, sending me a tape for my Walkman along with a note that read, "I saw this and got it for you because I know they're one of your favorite groups." The tape was Then & Now...The Best of the Monkees and they weren't just one of my favorite groups, they were my only favorite group.

That was the summer that The Monkees experienced a career revival, courtesy of reruns on MTV and Nick at Nite. Being a connoisseur of both pop music and zaniness, I quickly fell under the spell. But that tape took things to another level. Along with a couple of "Weird Al" tapes that I had probably somewhat tired of, it was all I had to listen to, so that's what I did. Over and over and over.

In the mid-1990's Rhino Records released remastered CDs of all of The Monkees' albums. Being possessed of a collector's mindset, I quickly amassed all 9 of them, along with three albums full of unreleased tracks (the Missing Links series). In my mind, those Rhino releases are still the gold standard for CD reissues. They have original artwork, generous liner notes, great sound quality, and (usually) relevant bonus tracks.

So, in honor of that standard, and of my childhood obsession, I'll be spending a fraction of my 2009 reviewing every single Monkees release.

First up, the 1966 release that started it all, The Monkees. This album has always been one of my least favorites in the band's catalog, and I don't quite know why. Is it because it kind of feels like a soundtrack to the T.V. show than a true rock album (it starts out with (Theme from) The Monkees, a fine piece of music, but a T.V. theme nonetheless)? Is it because I know how little control the four guys had over the record and its songs?

Monkees fans like myself bristle at the suggestion that they were a fake band. We'll come at you with a variety of evidence/arguments to the contrary. They made one album where they wrote and performed the whole thing! If the four hadn't had talent the band would have gone nowhere, T.V. show or not! Plenty of well-respected and beloved artists (Frank Sinatra, Elvis Presley) didn't write their own songs. And the Monkees fabricated origin is no less organic than the band that meets each other via newspaper advertisements or flyers on telephone poles. The proof is in the pudding: Like it or not, the Monkees made some of the most memorable pop songs of the '60s.

Post Milli Vanilli / C & C Music Factory and in the midst of American Idol frenzy, it all almost seems quaint to get up in arms about a band being too fabricated. But the '60s were definitely not the time to seem inauthentic or purposefully commercial, and the band and it's handlers didn't exactly help themselves at first. Some of the anger against the Monkees was obviously jealousy at their wild success. I'm sure there were those who felt Peter, Mike, Mickey, and Davy hadn't paid their dues. In fact, a persistent rumor says the Byrds' So You Wanna Be a Rock 'n' Roll Star ("Sell your soul to the company / Who are waiting there to sell plastic ware") was directed at them, though Roger McGuinn has denied it.

And then there was the misrepresentation factor. At first, it wasn't widespread knowledge that there was a group of seasoned songwriters and players behind the Monkees sound, and the back album cover certainly didn't help things. It gives a brief bio of each Monkee, accompanied by a bolded statement like, "Plays guitar and sings." This is basically deception by omission. Yes, Mickey plays drums, just not on any of these songs. Many of the songs feature players from songwriter/producer Bobby Hart's band, Candy Store Prophets (great name, huh?). In fact, the only instrumental contribution on any of these songs is from Peter Tork, who is one of six (!) listed guitarists on Papa Gene's Blues.

To be fair, by most accounts the Monkees themselves were victims, not victimizers. Michael Nesmith especially fought to contribute musically. He succeeded somewhat, landing two songs on The Monkees. One is the aforementioned Papa Gene's Blues, a charming country tune with a typically (for Nesmith at least) obtuse title. The other is Sweet Young Thing, a preview of the southern psychedelica Nesmith would start trading in a few albums later. Strangely, it was co-written with legendary composing team Gerry Goffin and Carole King.

Those two were also responsible for one of the album's best songs, Take a Giant Step. Mickey takes the lead and listening now it strikes me how outside-the-box the song is. Yeah it's got a great melody, but that bring-it-down-build-it-up dynamic and the heavy percussion along with a harpsichord give it that little something extra. The album's other highlight is the band's first number one hit, Last Train To Clarksville. It's clearly Byrds-derived, so if Roger McGuinn had written So You Wanna Be a Rock 'N Roll Star about the Monkees no one could really have blamed him.

Other songs don't fare as well. I'll admit my bias now that I am not a huge Davy Jones fan. His songs always seemed just a bit too twee for my tastes. Even so, he does well for himself on The Monkees. I'll Be True To You is a '50s style ballad with a spoken word bit and some pretty harmonies. I Wanna Be Free is similarly prosaic, but still offers an interesting counterpoint to the '60s pop of the rest of the record. However, I have to disagree when liner note writer Andrew Sandoval says, "It may very well be Jones' best recorded performance." No, no way. The sprightly This Just Doesn't Seem To Be My Day is a rockier moment for Jones, though it still comes off as more Herman's Hermits than Rolling Stones. It's a good companion for the earlier, Mickey-sung Tomorrow's Gonna Be Another Day.

The album is rounded out by the shouty Saturday's Child and a groovy stab at a Twist and Shout kind of tune called Let's Dance On. The album's worst song is also its last. Gonna Buy Me a Dog is an inane Boyce and Hart composition which Mickey and Davy didn't take seriously in the studio. Though straightforward versions were recorded, a goofy "madcap" version with the boys bantering and telling Vaudeville jokes while barely keeping up with the song was the one that made the album. It's mildly amusing and captures the boys' personalities well, but doesn't hold up to repeated listens.

Rhino's reissue include three bonus tracks. Two are inessential: I Can't Get Her Off Of My Mind (a shuffling Davy showcase that appeared officially on their third album, Headquarters) and the shortened T.V. version of (Theme from) The Monkees. I Don't Think You Know Me, another Goffin and King tune, is the only real treasure, with with Mike and Mikey sharing lead vocal duties.

So why is The Monkees one of my least favorite album from the group? Maybe it's just that middle level blah. It's not bad enough to inspire the contrarian in me to look for some ironic merit in it. And it's not good enough for the cheerleader in me to rave about. Most bands have an artistic arc to their career. They start out low and build. The Monkees started somewhere in the middle. It would get both better and much worse from here.

chiropractic treatment said…
I hope we can go to one show at least. it was a great show. I just can't imagine letting this Monkees reunion go by without seeing even one of their concerts!
12:36 AM