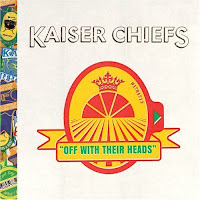 Off With Their Heads, the new album from Leeds band Kaiser Chiefs, finds the band moving forward by looking backward. I occasion my 200th review by doing the same.

By now there's no doubt that the digital revolution has drastically changed the music business. And though album is not dead yet, it's clearly on life support, and has been for awhile. This bugged me enough that I felt the need to defend the album on this blog. Nearly 4 years later I don't know that I can completely stand by my own words. I'm more and more convinced that the album is a casualty of the digital revolution, killed by a buyer's ability to pick and choose songs.

Some perspective might help. It is tough for me to say this, but I think I'm ready to admit that the album is not the primary way people experience music. It never has been, despite the best efforts of critics and and diehard obsessives like myself. No, the single is king. Downloading didn't cause that, it only made it more apparent.

Think about it: Popular interest in (and sales of) music has always been driven by single songs. Albums that have sold well have done so because they had multiple hit singles. And singles endure longer than albums. Ask the average person to name a Beach Boys album and they might come up with one or two. Ask the same person to name a Beach Boys song, and you're guaranteed a minimum of 5.

Consider also that the notion of the album as a complete artform, as anything but a collection of singles, didn't really come about until the '60s.

So why then is the whole notion of pop music criticism based on the album? Why have I devoted 5 years of my life to that very notion? Well, you might say that it's simply specializing. Diehard music fans aren't average people. They want their music in 30 to 80 minute blocks, well-sequenced and filler-free. They want albums.

I could stop there and consider the album (and my own blogging habits) justified. Dust my hands and move on.

The Kaiser Chiefs have caused me to take pause and reevaluate my own views and habits, and I'm ready to admit some things. While my fundamental appreciation of the album remains the same, my criteria for good albums and my approach to listening and experiencing them have changed.

To whit, I rarely listen to an entire album in one sitting anymore. It just doesn't work with my lifestyle. I'm much more likely to listen to individual songs on my iPod or laptop. When I do listen to albums it's in 10 minute segments on my way to and from work (see, a short commute can have a downside). As a result, what I value in an record has shifted. Shorter albums are much more preferable. And it used to be that an album that had very strong individual songs but no cohesion as a group would never make my favorites list. Now, I'm much more susceptible to these sorts of records.

Case-in-point: The Kaiser Chiefs previous album, Yours Truly, Angry Mob. While it contained its share of filler, the record was also home to attention-grabbing standouts like Ruby, Everything Is Average Nowadays, The Angry Mob, and Heat Dies Down. Taken in whole it lacked cohesiveness, but that wasn't enough to keep me from giving it an A and putting it in my top 10 for the year.

Off With Their Heads takes the opposite tack, sacrificing some of the wow factor for 11 succinct and sturdy songs that flow like wine at a dinner party.

Another interesting aspect that puts Off With Their Heads in direct opposition to Yours Truly, Angry Mob is the lyrical conceit. The latter album's songs were largely concerned with love-or-lack-thereof. Off With Their Heads has zero songs on that theme, and it's kind of refreshing.

The album's opener, Spanish Metal, reminds me of a game I sometimes play called Imagine How They Came Up With That Song Title (it also works with band names). Though the words "spanish metal" never appear in the lyrics, they are an apt description of the song itself. In my imagination this comes from an offhand studio comment by one of the band members. Never Miss A Beat is a fun call-and-response about young people: "What did you do today? / I did nothin." Being a teacher of middle school, I can appreciate the picture painted, as well as the astute choral observation about how many kids manage to be trendsetters despite their apparent apathy toward everything. Plus, there's a bit of a guitar bit that is a dead ringer for ELO's Don't Bring Me Down. Listen for it!

Addicted To Drugs mines similar lyrical and thematic territory, but it seems the kids have grown up only to find themselves still mired in a haze. The song somehow manages to evoke Robert Palmer's Addicted To Love without plagiarising.

Good Days Bad Days offers up some cynical-but-pragmatic life lessons about the nature of luck and fate. "Sticks and stones and animal bones / Can't stop me from havin' a good day or a bad day / There's good days and bad days."

Those examples aside, most of Off With Their Heads' songs don't have a specific theme or narrative. Instead, many songs are simply a collection of well-turned phrases or images, such as "Like a beetle on it's back / I've got to get back on track" (from Tomato in the Rain) or "I will not lie to you / But I'll definitely only give you half the truth" (from Half the Truth). It leads me to believe that there was a concerted effort to focus more on the music and performances. That part certainly works. With Black Sea/English Settlement-era XTC being the band's most obvious musical template, there are plenty of thrilling moments.

As much progress as Off With Their Heads shows in terms of Kaiser Chiefs becoming artistes, making an ALBUM certainly seems to be going against the times. I find myself wishing there were more songs that stood out from the crowd. As much as I hate to say it, I could see Off With Their Heads becoming a fondly-remembered but rarely-played album in my collection, while Ruby continues to be staple on my iPod.

As I wrap-up my 200th review and move on to the next 200, I can't help but wonder about the future, and how this changing consumption and reaction to music will change my blog, a blog initially built on the sanctity of the album. It feels scary to say, but perhaps it's time to reassess my criteria for what makes good music. For now, I'm going to continue to do "album" reviews, but with a very keen eye put on the individual songs. In general you can expect more focus on the twisted and interesting history of pop music; looking backward as I move forward.