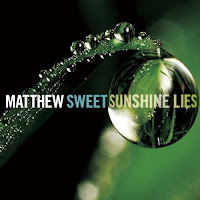 Did you know that paid music critics are contractually obligated to compare every new album by Matthew Sweet to 1991's Girlfriend? It's true. Unfortunately for them, the comparison has been apples to pomegranates for the past 17 years, since Sweet hasn't even really even tried to recreate his commercial breakthrough. Each of his 8 subsequent albums has had its own identity: Altered Beast was rawer, 100% Fun slicker, In Reverse grander, etc.

Sunshine Lies is the first Sweet album where the critics might actually be justified in making that tired-and-true comparison. It's guitar-heavy, slightly off-kilter power pop, and it features a reunion of most of the Girlfriend-era players. Whether intentional or not, it seems like a willful attempt to recapture some of that early-'90s magic.

As logic would dictate, the reviews have been mostly positive.

But this Sweet fan is not so pleased. As an unpaid music critic, I'm free to say that I don't think Girlfriend is the best Matthew Sweet album. In fact, I don't think it ranks anywhere higher than 5th (I'd put the three albums mentioned above and The Thorns ahead of it). Sure, it has some classic songs, like Divine Intervention, Girlfriend, I've Been Waiting, and You Don't Love Me, but I think there's about half an album of filler there. I know, gasp and cross yourselves.

Sunshine Lies is akin to Girlfriend in more than just spirit. Not only does it contain a fair amount of forgettable songs, it also decompartmentalizes Sweet's sound again. Since Girlfriend and Altered Beast, his albums have tended to have a unified style, keeping the carefully composed ballads apart from his reckless rocking-out. Of course there were some exceptions, but this is the first record where the contrast between the two styles is so blatant and stark.

In fact, the album could be split nearly down the middle between rockers and ballads. Let's take a look at each.

The Rockers:
The rockers storm out of the gate with Time Machine, which might just belong on a future "best of" collection. Its got stuttering guitar, an intriguing premise (our narrator wants to visit the future not to see his fate or that of the world, but to escape a fresh heartbreak), and a pleasing harmony-laden coda. If only the whole affair could have gone so well.

The next two up-tempo numbers are two of the worst Matthew Sweet songs I've ever heard. One of the hallmarks of Sweet's genius is his juxtaposition of careening guitars and his pure voice. Room To Rock keeps the great off-kilter guitars, but ruins everything with a ragged, off-putting vocal. Flying, besides not being a very well-written song, is also poorly-sung. And it's a problem that recurrs at least two or three more times on Sunshine Lies. I don't know if Sweet (who produced the disc himself) was trying to give the songs a live or natural feel, but it was a misstep.

The other rockers fare slightly better. Let's Love is a hippie message delivered with muscle and a snarl (and some pretty harmonies, too). Sunrise Eyes has some charming garage rock aspirations, but goes on a bit too long. And Burn Through Love is well-constructed and will sound great live.

The Ballads:
My gold-standard Matthew Sweet album is 1999's In Reverse. No doubt the album worshiped at the altar of Brian Wilson, but it went beyond homage, as Sweet showed a clear talent for writing mannered, melodic, and harmony-filled songs. He showcased it again on the pleasant Living Things, and uses the larger half of Sunshine Lies to do the same.

As expected, some of the ballads soar. Byrdgirl is not about a girl who listens to Sweetheart of the Rodeo incessantly; that spelling refers to the musical inspiration behind the song, which is quite pretty. The title track could have been on Living Things; it's full of nature-imagery and optimism (and harmonies from Susanna Hoffs never hurt a song). Around You Now and Feel Fear are also both top-notch, with the latter especially featuring sublime vocals, all the more precious considering some of the other performances.

It's telling, I guess, that even some of the ballads are iffy. Daisychain is just sort of there. Pleasure is Mine is well-written and rich in melody, but as on a couple of the rockers, the singing is strained. At first, the laid-back vocal feels immediate and fresh, but once the chorus hits, that becomes a liability. Closer Back of My Mind suffers a similar fate.

Any time one of my favorite artists comes out with something new, I genuinely want to love it. Sometimes, though, it's more work than it should be. Sunshine Lies has a lot going for it, but it's definitely not love at first listen, and it's definitely Matthew Sweet's worst album since Blue Sky on Mars. It's a Matthew Sweet album for the iTunes era. That is to say, it's better experienced on a song-by-song basis.

But so was Girlfriend.

Anonymous said…
Disagree overall, but do agree regarding ROOM TO ROCK and FLYING. The disc bears repeated listens to get under your skin. My personal ranking of Sweet's albums:

Note - Kimi Ga Seki was also recorded with the Girlfriend lineup - except Lloyd Cole and the late great Robert Quine.
12:20 AM