September 09, 2008
Is there a musical equivalent to "jumping the shark"? In television, where the phrase originated, it's the point where a show's quality drops and never quite recovers. But in pop music it's trickier.

Even if an artist looks like they've completely lost their touch, there's almost always a comeback. And how do we judge an artist as no longer viable? Do the fans decide, or the critics, or the buying public? Because, there's always a critical darling that's a complete commercial failure, or a record that sells boatloads despite a critical ravaging. Or the album that all the fans just adore, but no one else has heard of.

It occurs to me that the one constant in every established artist's oeuvre is the bad album, the one that's reviled by both fans and critics. Those unlovable albums are the ones this feature, Rock Bottom, is concerned with.

Here's how it works: I've consulted two sources, the AllMusic Guide (for the critical point-of-view) and Amazon.com (for the fan perspective*). The album with the lowest combined rating from both sources is the one I'll consider the worst. I may not always agree with the choice, and my reviews will reflect that, as well as offer a considered alternative. Finally, there are some limits. The following types of albums don't count: 1) b-sides or remix compilations, 2) live albums, 3) albums recorded when the band was missing a vital member, and 4) forays into a different genres (i.e. classical).

*A note about Amazon.com. I consider this the fan perspective, because most people who choose to review albums here adoring fans of the artist in question. As a result the ratings skew high. Similarly, we can conclude that albums with lowish ratings or few reviews are especially disliked.

R.E.M. presents a conundrum. Reader wakeupbomb suggests I don't consider the albums the band have recorded without Bill Berry. That suggestion jibes somewhat with rule #3 above (I don't want to get into a debate about the importance of a drummer). However, I feel that while the band's sound changed after Berry left, it was mostly out choice rather than necessity. So I will be considering all R.E.M. albums fair game.

As an aside, the consensus worst R.E.M. album with Berry is a tie between Out of Time (the hipster choice) or Monster (the casual fan choice). For what it's worth, I love both of them. 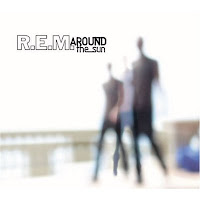 The actual winner is... Around the Sun, an unlucky 13th album, released in 2004. AllMusic Guide guru Stephen Thomas Erlewine's main problem with the album was this: "Here, R.E.M. write songs like craftsmen without distinction -- the songs are sturdily constructed but bland, lacking musical and lyrical hooks." He gave the album 2 stars out of 5. Other critics were similarly disappointed. Mojo called it "the first out-and-out dull R.E.M. album" and Billboard said, "the band's writing stagnates."

The 276 fans who posted reviews on Amazon.com gave it an average of 3.5 stars. There are many accolades, as one might expect, but others are nonplussed. "If Leaving New York wasn't a part of this album," Janson Kemp reports, "I would hate it." Caleb says, "I nearly cried when I heard this album," and you can assume they weren't tears of joy. And someone called Captain Scurvy states simply: "The magic is gone."

Even the band's own Peter Buck said it was made by "a bunch of people who are so bored with the material that they can't stand it anymore."

Of course that seals it. When the artist himself disowns an album there's no doubt it's a low point. But does Around the Sun really deserve such scorn? I wrote about this album when it came out (to read the entirety of what I said, click here). Suffice to say that I didn't agree that Around the Sun was a bad album. After listening again recently, I still don't. Yes, there are some plodding moments (High-Speed Train is the opposite of its title), but there are also risks (A Tribe Called Quest's Q-Tip rapping on The Outsiders) and textural variations, from resolute (Final Straw) to disturbed (I Wanted to Be Wrong) to optimistic (the title track). By most standards this is not an embarrassment.

Honestly, I think the problem is one of accumulated disappointment. Fans and critics lauded 1998's Up for being something new and different, especially after the rockish one-two punches of Monster and New Adventures In Hi-Fi. There were some sublime moments on the record, but they were all quiet ones. Then along came 2001's Reveal. It also refused to get loud, and while there were no bad songs, there were no thrills either. I think that by the time Around the Sun came out everyone was sick of pretending they didn't want the old R.E.M. back. In addition to its own faults, the album had to unfairly shoulder the collected blame for everything that was wrong with Up and Reveal.

Sure, enough, the band rocked-out on 2008's Accelerate and was welcomed back with open arms by fans and critics.

Don't get me wrong. Around the Sun is a lower-tier R.E.M. album. I won't argue that. I just don't believe it's a bad record, nor do I think it's their lowest rung. That honor I'd give to Reveal. To me, it deserves the "bland" and "dull" epithets more. It's safe and tame and samey and boring. Immediately after listening to the songs, I can't remember what they sound like (All the Way To Reno and Imitation of Life are the sole exceptions).

In the end, I suppose it's a testament to R.E.M.'s talent that their "worst" album is just merely okay.

I think I said that Around the Sun was a bad album, but after commenting a week or so ago I went and listened to it again a couple times, and I think I agree with you here. It isn't a bad album, its just...sort of...boring because they'd done the same stuff with the previous two albums. I don't really think any of their albums are bad. I think Around the Sun will get some more rotation in the coming years.