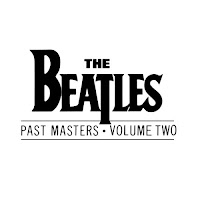 And now we conclude (for real) our journey through the catalog of a little-known '60s band I've recently discovered.

I didn't lie. Abbey Road was the last Beatles album to be recorded and Let It Be was the last album they released. Like its predecessor, Past Masters Volume One, this is a mop-up compilation, capturing the non-album singles the band released during their brief time together. Volume Two covers the years 1965 to 1970.

Once again, as I write about the songs, I'll pair them up the way they were released as singles.

First up is a double A-side (which basically means the band couldn't decide which song was better), Day Tripper and We Can Work It Out. These two songs were released simultaneously with the Rubber Soul album. In doing a brief bit of research I was stunned to find out that these songs were basically "forced." The label requested a single independent of the album, and thus Lennon and McCartney had to come up with some songs on demand. The fact that they're both outstanding is a testament to talent. Day Tripper is a spirited John composition about a girl who's only in it for thrills and We Can Work It Out is Paul's pop baroque plea for peace.

Paperback Writer led the next single, in 1966. After Nowhere Man, it's the second Beatles song to not be about romance. Instead, Paul tells the speedy tale of an aspiring novelist. It's one of McCartney's most lyrically intriguing songs, told in the form of a letter to publishers and featuring a nesting doll moment (the son of the main character in the novel aspires to be a writer just like the narrator of the song itself). Plus, I'm always a sucker for those high harmonies. The B-side was Rain, an obvious harbinger of John's psychedelic period. Lots of tape speed effects were used on the song, including a trippy backwards final verse.

At this point, we witness a curious time jump; the year 1967 is completely unrepresented in this collection. Did the band just slack off that year? No, but Magical Mystery Tour already did fans the favor of collecting that year's three singles: Strawberry Fields Forever / Penny Lane, All You Need Is Love / Baby You're A Rich Man, and Hello Goodbye / I Am the Walrus.

Past Masters Volume Two picks back up 1968, pre-The Beatles, with the bouncy Lady Madonna. Featuring a kitchen sink approach with brass, honky-tonk piano, and off-kilter background vocals, the song is an interesting commentary on motherhood, especially from a man who lost his mother as a boy. B-side The Inner Light is another George Harrison-loves-India song. It's notable for the fact that none of The Beatles played instruments on it; Indian musicians laid down the instrumental tracks and George sang on it. And to think The Monkees got so much flak for doing the same thing!

The other post-MMT, pre-The Beatles single is Hey Jude / Revolution, showing just how especially fertile of a time this was for the lads. The former is a singalong lighter-waver that McCartney wrote for Lennon's son Julian about his parents' failing marriage. The former is a reworked version of the song Revolution 1 on the The Beatles. I say reworked because though it was released in advance of the album, this single version was last to be recorded. In my opinion it's much preferable to the shoobie-doo-wop slow take on the album. Instead, it's a barn-burning screamy rocker that suits the lyrics and eliminates the wishy-washiness.

Next comes my favorite Beatles song ever. The Ballad of John and Yoko was released after the Let It Be sessions but before Abbey Road, and in truth only features half of the band: John and Paul. The two made the song in one session, John taking over Harrison's guitar and Paul taking over Ringo's drums (reminds me of the statement John Lennon made when asked if he thought Ringo was the best drummer in the world; he replied, "He's not even the best drummer in The Beatles!"). The lyrics are autobiographical, telling of John and Yoko's whirlwind wedding and the Bed-In for Peace that followed. When John and Paul harmonize it makes me sad they couldn't have worked out their differences. The B-side is a splendid George Harrison tune, Old Brown Shoe, which is leagues better than either of his Let It Be Songs. The tune shows off the strong instrumental chemistry between the four Beatles.

Finally, we get to some repeats. The second half of Volume Two features three slightly different versions of songs from Let It Be. If you ever wondered what Get Back sounds like without Billy Preston's thrilling piano solo, well, here you go. Its B-Side is a sublimely seductive John Lennon joint called Don't Let Me Down, which does feature Billy Preston. Also, if you wondered what Across The Universe sounded like before Phil Spector got ahold of it, it's right here to be enjoyed. Despite the animal sounds that open the song, it's a much better version.

Finally, there's Let It Be again, in a slightly shorter version. The B-Side is the second weirdest Beatles song ever after Revolution 9. Unlike that mess of sound, You Know My Name (Look Up The Number) actually has some charms, with John introducing the lounge-jazz of Dennis O'Bell, who Paul inhabits zestily, before the song breaks down into a Monty Python cavalcade of sounds and a '20s jazz ending. It's a polarizing track among fans, but I love it.

Despite the repeats, Past Masters Volume Two is much superior to its predecessor. It not only provides Beatles completeists with everything they need, but it also holds together as a whole listening experience, allowing the listener one last time to admire the greatness of a little band who could.

Grade: A-
Fave Song: The Ballad of John and Yoko