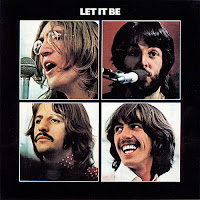 So I bet you're saying, "Wait, didn't you just tell us that Abbey Road was The Beatles final album? What gives? Is this one of those cobbled together posthumous releases?"

Here's what happened. The Beatles convened in early '69 to create a back-to-basics album, just the four of them together in a room full of instruments with the tape running. Unfortunately, the band were lacking in songs and patience with one another. The project and tapes were set aside. They later recorded Abbey Road and called it a career.

What to do with the Let It Be tapes were the source of some acrimony among the band (who at this point would likely have acrimony about where to eat dinner), but ultimately they ended up in the hands of Phil Spector. Yes, I-allegedly-shot-an-actress-in-my-mansion Phil Spector. Did anyone else know he had anything to do with music? I didn't either! Anyway, he was charged with making an album out of the material.

The liner notes indicate that the album "comes with the warmth and freshness of a live performance" but what that really means is that Spector left some studio chatter between songs. In other places he gives in to production excess, belying the original spirit of the whole project. But the problem with Let It Be is not Spector's production, it's that there are only 12 songs and the album still feels padded.

That's not to say that there aren't outstanding individual songs. Opener Two Of Us is a sweet love song, and though it could easily be about a romance, I choose to see it differently. Maybe because it marks the nadir of their partnership, I think it's really about Paul and John, especially when Paul sings, "you and I have memories longer than the road that stretches out ahead." Across The Universe is one of John's best songs, nonsense turned transcendent. Let It Be is a stone cold classic, inadvertently marking the transition out of the revolutionary '60s (think The Rolling Stones' Let It Bleed) into the more subdued '70s.

One After 909 is an early Lennon/McCartney composition, startling but effective in its simplicity. I've Got A Feeling is one of the few later-period Beatles tracks that truly feels collaborative, sporting a catchy McCartney melody and a funny spoken word bridge by Lennon. Also worth mentioning is the earthy organ-playing on the track, courtesy of future Nothing From Nothing hitmaker Billy Preston. Preston is also adds a rousing solo to the rocking closer Get Back.

That's a lot of highlights, and that's what makes Let It Be hard to forget or ignore. But it's hurt by the mediocre remainder of the album, from the sketchy Maggie Mae and Dig It to George Harrison's contributions I Me Mine and For You Blue (especially disappointing after his strong Abbey Road showing). The worst offender is The Long and Winding Road, which like a lot of people, I dislike for its showy orchestrations. But I also have a more personal reason to hate it. I used to work at K-Mart, and I suffered every moment of it. The in-store K-Mart Radio Network played a wide array of mildly bad songs from the '60s - '90s, made worse by the maddening, unyielding (save the holiday season), predictable repetition of them. The Long and Winding Road played every other day at 7:45 p.m. and the song's air of sadness never failed to underscore my own sense of disaffection.

All in all, Let It Be is an unfitting swan song, which I guess is okay since that wasn't what it was supposed to be anyway.

Grade: B-
Fave Song: Two Of Us

Firstly I enjoy your objectivity and wit, although I find it a little sad that the Long and Winding Road will in your mind be a permanent reminder of your retail industry employment malaise. I agree that Spector largely ruined this song, until the un-Spectorized recordings began to surface. Although schmaltzy, I find it can still be quite moving in it's pared-back form.

hdb renovation said…
The liner notes indicate that the album "comes with the warmth and freshness of a live performance" but what that really means is that Spector left some studio chatter between songs. In other places he gives in to production excess, belying the original spirit of the whole project.
12:31 AM

Glenn said…
Awww God, my favorite song. Beatles will always be the best for me whatever happens. I even love the lyrics of the song, very meaningful.

Saniya said…
Individuals with blood Groupe Sanguin B have been described to learn best by listening, reflecting and interpreting.
10:36 AM