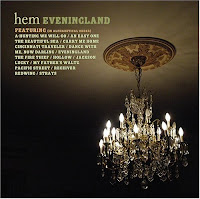 I'm not just practicing my adjectives and adverbs. I'm getting all the descriptive words out of the way, so I can be clear and direct about Hem and their second album, Eveningland. Hem is an 8-piece folk country band from New York. I say country, but not country in the way of Toby Keith and Garth Brooks. Rather, country in the way of Dusty Springfield of Ray Charles.

I went to see them sound unheard in concert about three weeks ago. After one great opener (the beautiful Dawn Landes) and one bad opener (the petulant David Mead) the band made us wait a good 20 minutes before showing up. Never a fan of tardiness, I was already preparing not to like them. But the minute they took the stage all was forgiven. I had one of those rare concert-going experiences where the performance actually created in me a sense of incredible well-being. In fact, for about five songs I went into my own world and dreamt.

I guess that's why Eveningland is such an appropriate title. The CD is best suited a relaxed mood, a cup of tea, and a comfy chair. Headphones optional, but preferred. That's not to say the music is without teeth. In fact, it can be outright powerful. But power doesn't mean loud. In fact, despite the presence of pedal steel, fiddle, piano, guitar, mandolin, male and female harmonies, and orchestration (if you have 8 people in your band you have to have something for everyone to do) the band's sound is surprisingly hushed. I guess that means everything is in its right place.

And despite the generally dreamy nature of the music, Hem are smart enough to not skimp on the hooks. Almost every song has a chorus that's 5,280 feet wide. The other big selling point of the band is lead singer Sally Ellyson's vocals. All those adjectives I listed above could be used to describe her voice. One friend of mine compared her to Karen Carpenter, and I wouldn't argue too much with that.

Lyrically, the album mostly focuses on that favorite love topic. In fact, it's a very romantic and Romantic album. Highlights include Lucky ("I wouldn't mind lying beside you / the rest of my days"), Receiver ("I'll always love you like I do"), and An Easy One ("But, Baby, hold me now"). My highlight is the cover of Johnny and June Carter Cash's Jackson. The original was a free-spirited, up tempo trifle. Hem slow it down and lend it gravity, even to lines like "We got married in a fever / hotter than a pepper sprout" and "Baby, comb your hair."

Despite a 16 track length (two are instrumental interludes) the album never flags in energy or quality. Even if you're not a fan of country, consider this album for those quiet, reflective moments. If you need more convincing, start over at the beginning.

Anonymous said…
I was at that exact same concert! The Quest right? They are just as good live if not better than they are on their albumns!
10:16 PM

Paul V. Allen said…
You're right; it was the show at the Quest! Libby, I might agree that they're better live than on record, because I was there not having heard a single note and it still was a wonderful show for me.