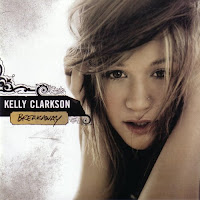 With American Idol soon to return to the airwaves, what better time to take a look at the first champion's new release?

Out of the three A.I. winners so far, I feel the most affinity for Kelly. This is not only because I rooted for her, but because she just seems genuine. That quality allowed her first album to be enjoyable despite its completely marketed nature. The same can be said for her second effort.

That's not to say that the records are especially similar. Whereas Thankful used R & B for its base sound, Breakaway adopts more of a rock mindset, and this suits Kelly well. She's taken a page from Avril Lavigne, using many of the same songwriters and even Avril herself (who co-wrote the title track), and if she chooses to continue in this direction, she could well become a Pat Benatar for our times (and yes, that's a compliment).

The thing that strikes me immediately about this record is how every song is completely down on romance. At least three songs are about being happier now that a relationship is over, and the others are mopey about things not going right in a relationship. The only exception is the bouyant title track, which is not even about a relationship. It's one of thsoe great "moving on to better things" songs, and has a wonderful bridge (something you don't come across enough these days).

Other early highlights include Since U Been Gone and Behind These Hazel Eyes, both produced Max Martin. Martin is the man behind most of the Backstreet Boys, *N'Sync, and Britney Spears hits, and though he didn't write either of these songs, the sugar rush thrill of his past work is nonetheless omnipresent. It's even enough to overcome the truly horrible title of the latter song.

The album takes a bit of a quality break on the next trio of songs, with Addicted being the worst offender. Who really needed another song comparing a romance to a drug, especially one so musically dreary? On this song Kelly worked with Ben Moody, formerly of Evanescence. The strident, dramatic sound of that band doesn't work with someone as down-to-earth as Kelly.

Thankfully, things pick up for the last four songs. Walk Away is the second best song on the album (after the title track). Tired of wishy-washy boys, Kelly tells us: "I'm looking for attention / not another question / should you stay or should you go / if you don't have the answer / why you still standing here?" It's perfect for Kelly, because she's great at being sassy, as her multilple renditions of Respect on AI proved. You Found Me, I Hate Myself For Losing You, and Hear Me round things out nicely.

The only curiousity is the live version of Beautiful Disaster (a track from Thankful ) tacked on at the end. What is the purpose of this? If it's to showcase her live voice, that was unnecessary. We already knew she had a great live voice...we watched her sing live every week under great pressure. The other idea might be to dramatically reinterpret the studio version, but it actually sounds identical. I hate it when quality control fails so blantently.

Barring that, this is another strong entry in the case for Kelly as the first and still the best. (This case holds up as long as you pretend the film From Justin To Kelly never existed.)

Anonymous said…
Hey Man,
I loved From Justin to Kelly...quit dissing my favorite movie...who are you to judge?!

Paul V. Allen said…
I have a sneaking suspicion that the person who posted this comment was the same person who bought my ticket to see that movie!
9:40 PM

Anonymous said…
Dude, I am from Kentucky I have no idea who you are, I just happen to love From Justin To Kelly. I was surfing it on the web and up came your blog. If you hate on From Justin to Kelly as much as you do than it's obvious to me that you've never actually seen it, because it is a cinematic masterpiece.

Paul V. Allen said…
Actually, I read somewhere that box office returns on From Justin To Kelly were higher in Kentucky than anywhere else in the country.
7:31 PM