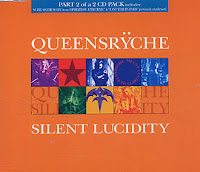 I have two distinct associations with this song. When it was a #5 hit back in 1990, I was 13 years old and also happened to be reading The Hobbit for the 17th or 18th time. If Peter Jackson does indeed make The Hobbit into a movie, I would strongly encourage him to use this song on the soundtrack. That acoustic guitar intro always makes me think of Dwarves turning poor Bilbo's cozy little home upside down, eating his food and singing their songs.

In college, friend / roommate Tim and I found we had a shared admiration for the song. One night, after several Dr.Peppers each, we called every radio station in the Quad Cities and requested it. We were met with a lot of stony resistance and one "oh that's a good song but I can't play it." It was a fun effort despite the failure.

The song itself is a six minute epic about dreams and nightmares. In fact, sometimes I like to consider it a cousin of Dream Police by Cheap Trick. Anyway, along with the spooky guitar line, there's a string section, including a mean cello, and some suitably pseudo-serious-but-actually-silly lyrics sung in an affected British accent (the band were from Washington state).

The sound builds as it goes, and crests with a freaky montage of voices, male and female, saying things like: "If you persist in your efforts you will achieve dream control" and "help me." Listening to this part on headphones in the dark is nearly unbearable. And, yes, you didn't misread. The song was a #5 hit; one of those wonderful fluke hits no one could predict before or explain after. But I do love it.

Album: Empire (1990)
Fave Moment: The sudden burst of "ahhh....we'll be watching over you" at the two-and-a-half minute mark.