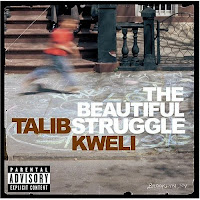 I get frustrated by friends who don't like rap.

I mean, here are intelligent, well-educated, open-minded people who will dismiss an entire genre of music with a couple of words, words like "annoying" or "trashy." Yes, some rap music is annoying and / or trashy. But so is some rock, pop, country, jazz, classical and world music. Like any subset of music, rap is large, it contains multitudes.

Talib Kweli is one of those artists who deserves more attention for bringing something different to the game. Though commercially unknown, he's nonetheless highly respected for his verbal skills. On Get 'Em High from The College Dropout (considered by many the best album of 2004) Kanye West uses him to try to entice a woman, to which Talib responds "quit twistin' my arm / I'll assist with the charm."

Jay-Z, considered by himself (and others, but mostly himself) to be the best MC in the game, gave us this lyrical tidbit on The Black Album's Moment Of Clarity: "If skills sold / truth be told / I'd probably be / lyrically / Talib Kweli." A bold compliment, and you can tell Jay meant it because the line before he'd just been talking about how he dumbs down his lyrics to sell more records. (As J.R.Ewing once said: "No one ever went broke underestimating the intelligence of the American public.")

On Ghetto Show, from his new album The Beautiful Struggle, Kweli doesn't quite return the favor. Instead, he agrees with Jay, saying: "If lyrics sold / then truth be told / I'd probably be / just as rich and famous / as Jay-Z." The message in this delayed call and response is clear; being a smart rapper (or rather, showing your intelligence in your lyrics) is not exactly lucrative. And we can hear Kweli dealing with this all over the CD. On I Try he tells us: "the label want a song about a bubbly life / I have trouble trying to write some shit to bang in the club through the night / while people suffer tonight."

Thankfully, what he seems to have realized is that songs about struggles don't have to be a struggle to listen to (thus the title of the album). The CD is filled with toe-tapping beats and catchy hooks, and barely drags throughout its 13 tracks. But at the same time Kweli doesn't sacrifice the lyrics. It can be an intoxicating mix.

Take the song Broken Glass. It's a sordid tale of a young girl who comes to the city with dreams of fame and ends up strung out and stripping. Nothing too surprising, save the fact that its set to a typically insinuating Neptunes track. Though that duo have produced a ton of recent hip-hop classics, it's easily their most affecting song, lyrically. And there's no happy ending: "She needed a ticket home if it's the right cost / instead she bought a ticket to ride the white horse."

And though there are a couple of self-aggrandizing songs (Back Up Offa Me, A Game), there's much more postulating than posturing. Other tracks approach the usual struggles of inner city life, politics (great line from the title track: "you try to vote and participate in the government / and the motherfucking Democrats is acting like Republicans"), love, and even the struggles of black women. Black Girl Pain actually celebrates the strength of African-American women (not their physical attributes, though when Kweli does that it sounds like this, from Never Been In Love Before: "thick like bifocals / stacked like 2 Pac vocals her body so loco.")

Unlike his Black Star partner Mos Def, Kweli has given us a concise, consistent, skit free long player. Less adventurous? Yes. More appealing? For sure.

Oh, and to those friends who don't like rap... all I ask is you add this small resolution for the new year, borrow this CD from me and give it a chance.

Grade: A-
Fave Song: We Got The Beat