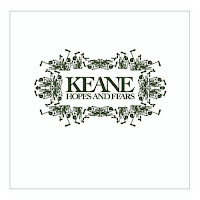 I have to admit something: When it comes to Coldplay and bands that aspire to the same aesthetic, I find my reaction becoming increasingly, well, cold. Groups like this are very easy to admire and even easier to like, afterall, they find their inspiration in such crowd-pleasers as The Cure, U2, and Radiohead. But I just can't help but feel that there's something missing.

Sure, it's great sit-around-feeling-depressed-but-fine-with-it music. It's music for big theatrical sighs and deep musings of deeper feelings, and grand proclamations. It may sound like I'm poking fun (and I am a little bit), but there are times when you're feeling exactly like that, and this music is the perfect soundtrack. But what about the times you aren't feeling like that?

Anyway, we're being subjected to a lot of new bands lately, first billed as "the next Radiohead," now hailed as "the next Coldplay." This includes Travis, Ours, Snow Patrol, Starsailor, etc. The problem here is twofold. The major one is that I hate to think that the production of music has become so cynical that bands cop to a certain sound just because it's commercially viable at the moment (though this happens all the time and has throughout pop's history). The other problem is that some people, like me, want their bands to have influences that reach back before the mid-nineties.

Keane is bound to, okay they already have, run into the usual comparisons. The sticker quote on the package calls them "anthemic and epic." The band's line-up doesn't help; they've got drums, piano, and vocals (there are some synths, programming, and bass in there too). Despite the minimalism, there's no lack of depth in the music...the piano is a full instrument, as is singer Tom Chaplain's voice. By turns he recalls Travis' Fran Healy, Pet Shop Boys' Neil Tennent, and Ewan McGregor's singing voice in Moulin Rouge (this is actually a compliment). In other words, he sounds Romantic.

And the songs themselves fulfill every expectation of the genre...every song is pounding, expansive, and deeply felt. The choruses are built to be sung by a stadium full of lighter-waving devotees. The first three songs on the album set that tone (culminating in the very pretty Bend and Break) and the band hardly deviates for the rest of it. On every song, from the quiet We Might As Well Be Strangers to the dramatic Bedshaped, Chaplin alternates a gentle wobbly lower register with a soaring falsetto.

I'd like to be bothered by the lack of cleverness and interesting imagery in the lyrics, but there's a directness and simplicity that serves the music well (and if you're unsure what I mean, just look at the title of the album, or think of Elton John's albums from The One through The Big Picture).

So all in all, this is really a complete nightmare for anyone who likes records that "take a few spins to get into" or who is just simply scared away by the conventional and mass-appealing. For everyone else it's wonderful ear candy, and thus the band has a very good chance to hit big.

It's possible that in a couple of years new bands coming out will be called "the next Keane." I kind of hope that's not the case, not because I don't wish them success, it just wouldn't be good for music history. And what I worry about personally is that after the initial infatuation has passed, will this just sit on my shelf with Coldplay and Travis and even Radiohead CDs, fondly thought of, but rarely played? Maybe I should just be happily depressed and hyper-contemplative more often.