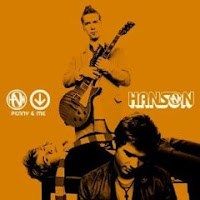 The best pop songs have choruses that just won't quit. They break open and soar. They make you itch slightly when you sense the verse is coming to an end. They make you wish that there was just one (or two, or three) more repeats of that chorus somewhere in the song. As Roxette put it: Don't bore us, get to the chorus!

Hanson know a thing or two about that. Unfortunately cute and lumped in with the boy band phenomenon, the band never fit there, in retrospect. The boy bands had lots of awesome choruses too (I Want It That Way) but they also had choreographed dancing and strange facial hair and robotic presences. Hanson played their own instruments, and wrote their own songs. In their minds, on the boy band spectrum they were closer to the Beatles than the Backstreet Boys.

After their extreme overexposure (thanks to the aforementioned cuteness and a mega hit called MmmBop) Hanson quietly hammered out a solid second album (This Time Around) full of rootsy power pop, harmony and catchy melodies.

Their new record is called Underneath and continues in that same vein. The first single is called Penny & Me, and I'd urge even the extremely skeptical and hipster-minded pop fan to give it a listen. Yeah, it's got one of those choruses that keep making you hit the track backwards button. And the boys obviously know it. Look at these words: "So baby let's roll the windows down / turn the radio up push the pedal to the ground / Penny and me like to gaze at starry skies / close our eyes pretend to fly / It's always Penny and me tonight."

There are a lot of feelings packed in there, and the melody and harmony match the sentiment every step of the way. It's the main reason I listen to music: to evoke a certain sense of exhilaration, freedom, whimsy, introspection, dreaming.

The rest of the song is all about a boy who's enamored of a girl who seems to have one foot on the ground and her head in the stars, and who makes him feel the same way. But it hardly even matters; the verses are just there to hold us over until we can get back to the chorus.

Hanson may never match the success they once had, but it's a little sad that this song (and the album it's on) won't get even half the same recognition. Critics always say things like this, but Penny & Me is a song that should be all over the radio, if radio ran the way it should. Then again, if it was, we'd all hate Hanson for being too cute and commercial. Strange world.

Anonymous said…
Wow, Paul Allen, you've just made my day. The world needs more wise people, like you. Regarding "Underneath" and this post: you've pretty much just put the words in my mouth - and added a lot of important views!
I know it's been a long time since you posted it, but it's just as important today as it was 3 years ago, and probably will be just as important for sometime henceforth.
Thank you,
rock on!
8:56 AM