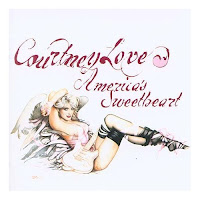 In so many ways this album is just as personal and self-absorbed as Hang On Mike, though Courtney never mentions herself by name. Then again, she doesn't really have to; anybody who has even a passing interest in celebrity news is all too familiar: naked cavorting, drug arrests, legal battles over child and music custody, famous boyfriends, etc. In fact, since '98 Courtney has been known for just about everything but music.

Actually, that year's Hole album, Celebrity Skin , was a largely (and unjustly) ignored effort. Critics thought it too poppy and fans that wanted their music poppy were already enamored with Britney and Backstreet. I found it to be the perfect balance: a facade of catchy hooks and harmony in front of world-weary and fatalistic lyrics. It's exactly what you'd expect from Courtney, a seriously messed-up woman in a beautiful package.

America's Sweetheart is hardly different, though there's definite evidence that the years have worn on Love. Sunset Strip is a perfect example on an album full of them. It starts out sweetly enough, with the narrator feeling content and confident, but as the song wears on it becomes a brutal kiss-off. The lyrics careen out of control, as does Love's voice: "Were you jerking off to her, or were you jerking off to me," she asks in a strained rasp and then continues to rant about "voices screaming in my head" and "rock 'n' roll bitches."

And so it goes. Throughout the album Courtney sneers, screams, and makes outrageous demands. It would all be a big nasty train wreak if it weren't for the fact that every song has a cruchy riff (like Mono) or gentle harmony (like Sunset Strip) to hook you in. Given the circumstances, it's a naturally harder-edged album than Celebrity Skin (she was in the middle of her Versace period when it was made), but to my ear it's no less accessible or commercial.

As for the self-reference, it's very clear: Every song is about Courtney. When she mentions "him" there's no doubt that she's referencing Kurt Cobain. When she says that nothing in her life feels as good as drugs you really believe her. The closest equivalent I can think of is an Eminem album, where you sometimes feel as though you paid to listen to someone else's therapy.

But that's somehow not a bad thing. Of course you've gotta assume that the album title is ironic, which is good because the last thing I want in an album is an out-of-control drug addict who takes herself too seriously. The second song, But Julian, I'm A Little Bit Older Than You (a funny tirade aimed at The Strokes' lead singer) is proof positive that Courtney doesn't. And since you know she has some sense of humor, Love gets away with lines like "I am the center of the universe" without inspiring disgust, and maybe even leading you to believe it, at least while you're listening.

Rating: B
Fave Song: Hold On To Me