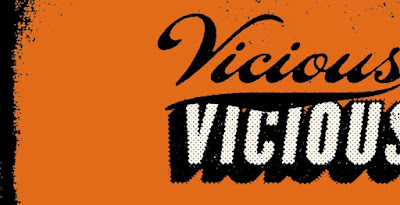 If you need a reference point for the work of Vicious Vicious mastermind Erik Appelwick, the most appropriate would be Beck. Like Mr. Hansen, Minnesota-based Appelwick has the ability to navigate between making you laugh and making you cry and making you want to dance, and embraces genres from country to R& B to folk to pop.

I've included songs from the two albums Appelwick did under the name Tropical Depression, because honestly there's not a lot of difference between that and Vicious Vicious. I very literally wrote the book on Appelwick, so please feel confident you are hearing from an authority here.

If you have Amazon Music Unlimited, you can listen to an alternate version of list here (sadly, not all of VV's music is on the service).

1. "Shake That Ass on the Dance Floor" (from Blood + Clover, 2003)
A loungy, laconic come-on that cemented Erik's prominence in the early 2000s Twin Cities music scene.
2. "Here Come Tha Police" (from Don't Look So Surprised, 2005)
A tale of teenage delinquency set to an irresistible keyboard pulse.

4. "Girl, What's Your Name?" (from Parade, 2007)
Appelwick returns to suave Lothario mode, but the object of his affection is a '70s-style badass villainess. Not-so-fun-fact: This was the last true collaboration between Erik and his original Olympic Hopefuls bandmate Darren Jackson.
5. "Ho Baby" (from Parade, 2007)
A disco-styled booty call, but the motivation is less libidinous than it is that our narrator has realized - in the loneliness of a sleepless night - that he actually misses her company.

6. "Hangin' On" (from Vicious Vicious, 2012)
The 2012 self-titled album marked a shift in Appelwick's songwriting toward a more layered and dreamy, but less lyrically-direct, approach. However, the hooky guitar figure and gorgeous melody of this tune show his pop instincts remained fully intact.

9. "Big Talk" (from Tropical Depression - Islands, 2016)
Islands sounds like an album from 1983 by a band you never heard of that you randomly picked out of a vinyl discount bin and ended up loving to death. "Big Talk" is a great song, but I think of the whole album as being of a piece. If you have a half an hour sometime, check out the album-length video Appelwick put together: https://www.youtube.com/watch?v=IddXa6zA-ew&t=999s
10. "Waitress with the Cocaine Blues" (from Gravity, 2020)
Someone who has been making albums for more than a quarter of a century (Erik's recording career started with a band called The Harvesters in the mid-1990s) shouldn't really be able to surprise you, but this tune, with a ramshackle charm reminiscent of a late-period Beatles b-side, is something genuinely new for him.

11. "Satellite of Love" (from Gravity, 2020)
I really don't know why pop musicians have such a fascination with writing about satellites, but it's hard to get mad about it when the result is a song like this duet between Appelwick and his Citrine collaborator Bethany Tate.
12. "Born to Love" (from Paradise, 2022)
In my opinion, Erik is at his best when he's being vulnerable, and Paradise is his most emotionally open album since Don't Look So Surprised. "Born to Love" is not the album's catchiest song, but it does encapsulate its themes. And I love the way it builds up to a wall of Beach Boyish sound, along with two(!) fuzz guitar solos.