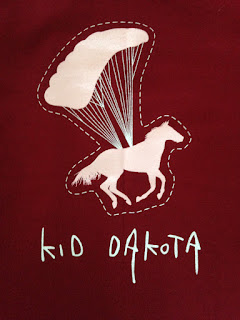 Kid Dakota is Darren Jackson, a South Dakota native who made a name for himself in Minneapolis/St. Paul in the early 2000s and continues to put out carefully-constructed albums of deeply-felt songs.
Not to brag or anything, but I literally wrote the book on Kid Dakota, so you should feel pretty good about the validity of my choices here. That said, my tastes are forever skewed toward the pop side of things, so this particular list might underrepresent the more experimental elements of Darren's music.
If you have Amazon Music Unlimited, you can listen along here.
1. "Crossin' Fingers" (from So Pretty, 2002)
The music is claustrophobic and dramatic, matching the mindset of the song's cuckolded narrator.
2. "Pairin' Off" (from So Pretty, 2002)
This brief acoustic tune is open and sweet as Kid Dakota will ever get.
3. "Ivan" (from The West is the Future, 2004)
A barnstormer that touches on many common themes in Darren's music, most prominently a sense of hopelessness in a world full of cruelty: "I might be able to accept the god who made this world / but I can't accept the world that this god made."
4. "10,000 Lakes" (from The West is the Future, 2004)
Funny is not a word you usually associate with Kid Dakota's music, and this song isn't funny per se, but it does have a few tongue-in-cheek moments that will elicit a chuckle from anyone who's ever spent a winter in Minnesota.
5. "Stars" (from A Winner's Shadow, 2008)
A deeply moving song that pairs well with Hum's "Stars."
6. "Transfusion" (from A Winner's Shadow, 2008)
A song about the apocryphal stories of an instant cure for drug addicts that involved a full blood transfusion (Keith Richards was rumored to have it done in the '70s to get in proper shape for a Stones tour).
7. "Dreaming of the City" (from Listen to the Crows as They Take Flight, 2011)
Darren started out in a cover band with several country tunes in its repertoire, and you can hear that influence in this thoughtful tune about finding your life circumstances a good distance from where you want them to be.
8. "Phantom Pain" (from Listen to the Crows as They Take Flight, 2011)
A haunting duet with singer-songwriter Haley.
9. "Hope" (from Denervation, 2018)
A lovely song written from a not-so-lovely mindset: "Hope is a dangerous thing / When there is nothing to hope for."
10. "Keep Coming Back" (from Denervation, 2018)
Darren has more than a couple recovery songs, but this one is probably the most honest. The xylophone (or is it a vibraphone?) on the bridge gets me every time.
11. "Futurecide" (from Age of Roaches, 2020)
His grooviest tune outside of the Hopefuls.
12. "Homesick" (from Age of Roaches, 2020)
The music is more danceable, but the lyrics are just as bleak as anything on The West is the Future as they survey the aftermath of an apocalyptic catastrophe.