August 20, 2016
When I wrote about Weird Al's last album as a continuation of my every-album-reviewed series on him, I mentioned that the other bands who'd been a part of similar series (The Beatles, XTC, and The Monkees) wouldn't be putting out new material.

I guess I'll take that back, because here we are, with a new Monkees album, and with one of the members of XTC involved. Part of life's wonderfulness is its lack of predictability.

What was predictable was that new Monkees material would appear in a year ending with "6":  Their debut was in 1966, the semi-reunion (Dolenz, Jones, Boyce, and Hart) was 1976, the comeback as a trio happened in 1986, and the full-band studio reunion (Justus) came out in 1996. (Group infighting held them out of doing anything in 2006). 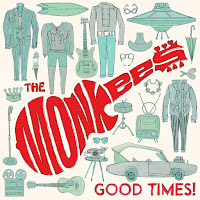 Good Times! was produced by John Hughes (not that one) and Adam Schlesinger (of Fountains of Wayne) and combines reclaimed tunes from the archives with newly-written ones from Monkees-loving songwriters and the boys themselves. In this way it's an album that's representative of all phases of the Monkees' recording career. Some have decried the fact that the boys made an album without Jones, but it's worth noting that of the Monkees' 11 studio albums, 4 were done without at least one of the four members.

When I wrote about the bands' original albums, I broke the songs into categories such as "The Classics" and "WTF" but that doesn't quite work with a new album, so I've devised new categories.

Old Songs
Very few bands' archives have been as well-mined as The Monkees' has, with b-sides, unreleased songs, rehearsals, and alternate versions all seeing the light of day thanks to Rhino's steady shepherding of their catalog. But somehow the band were able to uncover more songs they didn't get around to recording or finishing during their prodigious 1966-1970 studio spree.

It's a testament to just how much amazing material the band had at their disposal that songs by Harry Nilsson ("Good Times"), Gerry Goffin and Carole King ("Wasn't Born to Follow"), Neil Diamond ("Love to Love") went unused. All are here using the original '60s tracks given 2016 overdubs (mostly, it seems, in vocals). Nilsson's song is a bit of a trifle, but it's a fun one, and the idea to keep his original demo vocals and turn it into a duet with Mickey was inspired. It has a vitality that is lacking on, say, The Beatles' "Free as a Bird," which had a similar genesis.

Peter takes the lead on "Wasn't Born to Follow" and the tune has an instantly recognizable feel, despite not being evocative of any other song that I can identify.

The same can't quite be said of "Love to Love," which has elements that recall both "I'm a Believer" (the organ part) and "Solitary Man" (the descending guitar chords on the chorus). Perhaps this is why it never before saw the light of day. Even so, I can't quite blame the band for including it, as it ensures Davy Jones presence on the album, despite his 2012 death.

Tommy Boyce and Bobby Hart, who are responsible for some of the Monkees' most recognizable tunes ("(Theme from) The Monkees," "Last Train to Clarksville," and "(I'm Not Your) Steppin' Stone"), wrote "Whatever's Right," a pop confection with fun backup vocals from Nesmith, Mickey's sister Coco, and Bobby Hart himself.

And the king of bubblegum pop, Jeff Barry (who also produced the mostly-forgettable, and at that time final, 1970 Monkees album Changes), adds the bluesy "Gotta Give it Time."


New Songs by Outside Songwriters
There's an interesting dichotomy of approaches by the six songwriters brought in to contribute material. Both the gorgeous "Me & Magdalana" (written by Ben Gibbard) and the boppy "Our Own World" (written by Schlesinger) could slot easily into the songwriters' main projects (though in the case of "Me & Magdalana," nothing Death Cab could do could match the pairing of Mike Nesmith and Mickey Dolenz's voices.)

In contrast, Andy Partridge and Rivers Cuomo's songs ("You Bring the Summer" and "She Makes Me Laugh") are overt attempts to write in a '60s style. "She Makes Me Laugh" would need a major overhaul to sound like a Weezer song, and XTC would have to go back to their abandoned Zither Records bubblegum album to make "You Bring the Summer" fit into their catalog. Though it aims at psychedelia rather than pop, I would put Noel Gallagher and Paul Weller's "Birth of an Accidental Hipster" into this same category. One would strain to hear any direct lineage of The Jam or Oasis in the song.

What's interesting is that, to my ear, neither approach seems to have an advantage. The danger, I suppose, of the Gibbard and Schlesinger method is that it could overreach in trying to make the Monkees sound modern (which has been done; see Pool It! for proof), but both guys write in such a classic pop form that it doesn't matter. The pitfall of the throwback style of the others is that it can come off as parody. Luckily all three songs are strong enough to avoid that, mainly because they are absent of any direct comparison to classic Monkees tunes.

New Songs by Monkees
Each of the living Monkees gets a Headquartersish chance to do their own stuff, too. Peter Tork's "Little Girl" is a bit of a cheat in the "new song" category, since he wrote the song back in the '60s as a sequel to "I Wanna Be Free," and he is known to have performed live at least a couple of times in the '70s. Even so, it was never put to wax or plastic or compressed data file before now. The tune is a sweet one, and though Peter is not the most gifted lead vocalist, he makes up for it in believability.

Mike's "I Know What I Know" is a musically understated love song with none of the country rock flavor he became known for. It's got a weariness and wisdom that suits his age. The same can be said of Mickey's "I Was There (and I'm Told I Had a Good Time)," a tongue-in-cheek romp that plays on memory and bravado in a self-depricating way.


The Bonus Tracks
There are four extra tracks that aren't part of the official album. Two can be purchased as bonus tracks on the deluxe edition, and two have been released as a 7" that comes with the vinyl edition of the album (but only if purchased at Barnes and Noble). All are easy enough to find via YouTube.

Zach Rogue of Rogue Wave wrote "Terrifying," a sweet folky love song with Beach Boys touches and Mickey on lead. The song is in the category of "Me & Magdalana" and "Our Own World" in that it could fit on a Rogue Wave album. It helps that Zach's voice is not dissimilar to Mickey's. Peter plays keys and Mike the guitar on this one.

"Me & Magdalana ver. 2," gives the tune a faster tempo with a prominent chugging, ringing guitar riff that recalls the Byrds. It's still a great song but I prefer the way the first version keeps the focus on the harmonies and lyrics.

The 7" leads off with another crackerjack Partridge composition featuring Mickey on lead vocals. "Love's What I Want" sounds a bit more like an XTC song than "You Bring the Summer" does, especially the verses, which one could easily hear Partridge singing (Mickey obviously kept the phrasing the same; listen to the line "sorrow black as pitch"). The song is bolstered by a 12 string, and even incorporates Mickey's Headquarters tune "Randy Scouse Git" into its outro. Pete Thomas (of Elvis Costello and the Attractions) drums on the track.


The B side is "A Better World," a tune written by Peter Tork's brother Nick. It features a charming vocal by Peter and a very '60s sentiment of working together to improve conditions for everyone around us.

Overall, Good Times! is a fantastic celebration of everything that made and continues to make the Monkees great. I might quibble with the sequencing being a bit too Micky-heavy in the first half of the album, but that's really a minor thing. Anyone who ever had any affection for The Monkees will be done proud by this record. And if it is the band's final statement on record, it's a great way to go out. Then again, 2026 is just around the corner...

Unknown said…
You need to be the attention grabbing sort of writer. You can do this by asking a query, defining an anecdote or inserting a quote. You must make your customized essays as convincing and informative you can find it at procustomwriting.com; they should be well worth an An and over. If you really want to remain on best at any time, by no means forget about this magic technique.
6:45 AM