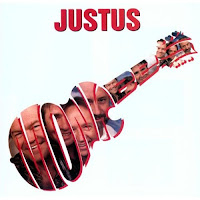 This was significant for a couple of reasons. For one, it marked the first time since 1968 that all four members agreed to participate in a Monkees project. For another, they decided that, like their landmark Headquarters album, they would do everything themselves. And the result was Justus (get it?).

I suppose the boys had the idea that the album would, once and for all, establish them as a true band. Even Headquarters featured an outside producer, a couple of session players, and songs by professional songwriters, but Justus, is really that, just the Monkees. They wrote, played, and produced everything themselves.

Now keep in mind that at this point Mickey, Davy, Peter, and Mike were rusty. In the early '90s Mike had picked back up music-making after a decade-plus hiatus and Peter, Mickey, and Davy had toured sporadically as the Monkees since 1987, but this was hardly musical heavy-lifting (I saw them in the fall of '95 and they had a full backing band; Peter was the only one with an instrument). I refuse to believe musical talent ebbs with age, but any underexercised muscle is bound to go weak with disuse. And let's face it, the Monkees' music-creating muscle (Nesmith aside) was never that toned in the first place.

Put simply, Justus is just not that good.

The Classics:
Nothing to see here. Let's move on.

The Pleasant Surprises
The album's first pretty good song is its second one, Never Enough. The song has a nice chorus, and all the boys get to sing along. Mickey wrote and sang lead.

The biggest surprise on Justus is that Davy Jones more than holds his own. Both of his composing contributions, Oh What a Night and album closer It's Not Too Late, come on like typical Davy fluff. The latter even starts with the cringeworthy line, "If I had a penny for everytime I thought about you / I'd be a millionaire." But both get better as they go along, delivering strong choruses, straightforward arrangements, and the whole band singing together (something I always wished would happen more). It's Not Too Late's big finale even features Mickey trying to outsing everyone, and Davy ratcheting it up a notch himself to overtake Mickey at the end.

You and I is a remake of the Mickey and Davy tune on Dolenz, Jones, Boyce & Hart, and it's a good one. The arrangement here is slightly more prosaic than the original, but it has the same charm. I even had a dream where this song was performed in a karaoke bar and everyone in the place sang along and harmonized. Speaking of recycled songs...

Comme Ci, Comme Ca:
For whatever reason, the boys decided to re-record 1968's Circle Sky for this album and make it the opener. Maybe they thought that it would be new to the scores of people who didn't see Head or buy the soundtrack album? At any rate, despite some clearer enunciation by Nesmith the new version isn't much better or worse than the original, and thus seems unnecessary.

Unlucky Stars is Mickey's shot at a '50s style ballad. It's a successful attempt overall, but doesn't really stand out.

I Believe You, Peter Tork's only singing showcase on the album, is a kind of a free-form jazz experiment. It's not something I personally want to listen to repeatedly, but the choral bits and the fact that it's Peter's only lead vocal make it worthwhile.

WTF?
What happened to Mickey? He's still the dominant Monkee as usual, but his once-reliable vocals are not so trustworthy on Justus. On Dyin' of a Broken Heart and Regional Girl his voice sounds strained. The former is a half-hearted rocker with some good guitar work and some lame lyrics ("You lived through Nixon and a drug or two / Just to get your due / Dyin' of a broken heart"). The latter is not bad lyrically, but has no real melody or hook.

It's My Life is Mickey's crooner moment, wherein he looks back on his life and the hard-earned wisdom he's earned (but no regrets, never those). He might has well have have covered My Way and been done with it. And again, his vocal is just not strong enough, which just kills a song like this one.

Run Away from Life is another Peter composition, but Davy takes the lead vocal. I think that was a mistake. The song's lyrics are okay, if a bit disturbing in their insinuation ("Let's go off into the heavens / In eternal happiness for free"), but the whole thing is strangely amelodic.

Finally, there's Admiral Mike. Mike wrote it (thus the title, I suppose), but Mickey sings. Why didn't Mike sing and showcase his involvement a little bit more? Who knows. Anyway, this is a vaguely psychedelic, vaguely punk, very angry song. What's Mike angry about? Ads and the people who sell them, and that's all he'll really say. I'm sure there's a story there, but it's not clear from the song itself. I don't mind the anger, really. I'm sure it's justified. But would it hurt too much to make it more fun to listen to?

Thus ends the long and twisty history of the Monkees. It's a difficult story to summarize, but I would say it's about four men who got caught in a huge commercial juggernaut and tried to make the best of it. Sometimes they were victims (More of the Monkees), sometimes they took over the controls (Headquarters, Head), sometimes they shot themselves in the foot (Instant Replay), and sometimes they just willingly surrendered in hopes of keeping the machine running (Changes, Pool It!).

If the sole purpose of Justus was for the Monkees to prove once-and-for-all that the Monkees could be a self-contained band, then they accomplished that in spades. The group followed their own muses, writing the types of lyrics and melodies they wanted to. They ignored the specter of commercial appeal and didn't try to recreate their classic sound in order to make a buck. That's definitely admirable (though the record company may not have agreed).

Dave said…
I enjoyed your Monkees reviews, but what about "Pool It", the Dolenz-Jones-Tork contribution from 1987? Surely as a child growing up in the '80s and loving the Monkees you couldn't have missed that one??
7:13 PM

I wrote about Pool It!, but it's under the heading Rock Bottom: Monkees. It's part of a series I've been doing about about bands' least-liked albums. Here's a link:
http://3min49sec.blogspot.com/2009/08/rock-bottom-monkees.html
10:14 PM

Unknown said…
Just to make a point of a factual error here. Michael Nesmith's last post Monkee record prior 'Justus' was not in 1979. 1992, he produced Tropical Campfires. He followed that with a tour to promote RCA's then recent cd release of the First National Band's back catalog. After that, he produced the follow up to 1974's The Prison with the Grammy nominated The Garden. This was then followed by Justus. Musically, Nesmith was just as busy in the 90s as he was in the 1970s.
1:54 PM

Paul V. Allen said…
Thanks for the correction. I was working off some bad information, obviously. I'll change the review to reflect that, though it certainly doesn't help Nesmith's case at all!
3:24 PM