September 06, 2015
The one constant in every established artist's oeuvre is the bad album, the one that's reviled by both fans and critics. Those unlovable albums are the ones this feature, Rock Bottom, is concerned with.

Here's how it works: I've consulted two main sources, the All Music Guide (for the critical point-of-view) and Amazon.com (for the fan perspective). The album with the lowest combined rating from both sources is the one I'll consider the worst. I may not always agree with the choice, and my reviews will reflect that. I'll also offer a considered alternative.  Finally, there are some limits. The following types of albums don't count: 1) b-sides, remix, or hits compilations, 2) live albums, and 3) albums recorded when the band was missing a vital member.


This is why we have rules. By the numbers, Rush's 1974 self-titled debut is their lowest-rated album by both fans and critics. However, the band that recorded that album was comprised of Geddy Lee, Alex Lifeson, and John Rutsey. Soon after the album's release, Rutsey was sacked and Neil Peart joined, Since Peart is basically considered the best rock drummer of all time, and because he writes the lyrics, I'm resolute that he should be considered a vital member of Rush. 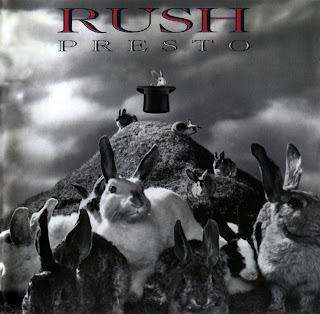 That leaves 1989's Presto as the album with the lowest combined rating.

What's interesting about this is that, as derided as the band's '80s embracing of synthesizers and electronic drums is among a large contingent of the band's fans, Presto is actually the album where they began going back a more organic and traditional power trio set-up. Gregory Heaney's AllMusic review hypothesizes that the band was "rusty" after their years of experimentation. He stresses that the album isn't bad, just lacking in both ambition and fun. (Heaney also advises   readers to listen to Rush's '70s work instead, which shows he paid very close attention in rock critic school.)

But how about the fans?

According to Amazon.com reviewers, partial blame falls on that nefarious gremlin, production. Tripmaster writes, "The production is so thin, treble, high, crisp, bright...Alex's guitar is ANYTHING BUT beefy, the snare sounds like a cap gun and THERE'S NO BALLS." Christopher Culver says that, "The drums have no punch, the sounds is flat with little variation in dynamic, and there's an incongruous edit in the second track." Lance says, "Presto sounds as if it was recorded in a tin can." The producer of the album was Rupert Hine, who brought experience in the pop arena, having worked previously with for Tina Turner (on a large portion of her 1984 smash Private Dancer album) and Howard Jones. He was a curious choice if the goal really was to get back to basics, as neither of those artists were known for organic-sounding tracks. But as much as I can appreciate the importance of production, it always comes down to the songs, doesn't it?

Well, a lot of fans find those lacking on Presto. Culver takes aim at one particular element: "Neil Peart's lyrics are perhaps his weakest in the entire band's career," he writes. JD politely agrees, adding, "The lyrics could have benefited from more time spent on refinement." As an example he points to The Pass: "All of us get lost in the darkness / dreamers learn to steer by the stars" is a beautiful verse...but, it's followed by "all of us do time in the gutter, dreamers turn to look at the cars." And Lance piles on as well, calling the lyrics "insipid." He concludes that "the songs are B-O-R-I-N-G!...melodious hum-drum" and that on Presto Rush had become "3 musical gods, who somehow, somewhere, forgot how to play."

Before I give my assessment, let me just stop here to marvel at the fact that none of the Amazon reviewers gave in to pun-making. There was not a single comment along the lines of "Rush just doesn't have the magic here." What a fantastic display of self-control!

So, the fans were harsh, but does Presto deserve it? Personally, I say no. The complaints about production are perhaps warranted, and the album is largely workmanlike. As to lyrics, yes, there may be a clunker or two in there, but to my ear there are no outright bad songs (okay, the chorus of Anagram is pretty close to bad). And there are several strong songs on Presto, including the enchanting title track, opener Show Don't Tell, Chain Lightning, The Pass, and the oddly-affecting Available Light.

If I'm picking my least favorite Rush album it would probably be Fly by Night or Caress of Steel, as very early Rush has never been my favorite. I'll also throw 1996's Test for Echo under the bus. It's their only post-1980 album that hasn't connected with me in any meaningful way; mostly because I'm a pop music guy at heart, and Echo is one of Rush's hardest, least song-oriented albums. But at least, I suppose, THERE'S BALLS!