"I Bring to You My Songs"

May 21, 2015
This past Saturday I went to what felt like one of the biggest concerts of my life: I saw Billy Joel at the Target Center in Minneapolis.

I've seen plenty of megawatt acts in my time, but this one felt different going in. Billy's music has been part of my personal soundtrack since I was six years old. My mom played the tapes of An Innocent Man and Greatest Hits until I knew those songs by heart. I got the Storm Front album on cassette for the Christmas of 1989. In college Billy Joel's music was a welcome nostalgia trip, a musical warm blanket. As an adult I've expanded my knowledge of his catalog, discovering and reveling in the lyrical depth and intensely autobiographical nature of his songs.

But, despite a couple of good opportunities, I'd never seen the man in person. 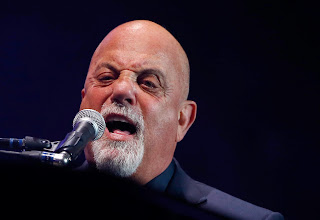 Even so, I tempered my expectations as best as possible. Truly transcendent concert experiences are rare (I've had maybe 3 in my life out of scores and scores of shows), and they almost never happen when they're expected. The ones I've had were when I started with neutral-to-generally-positive feelings for the band and the performance completely won me over, pushing those initial feelings toward adoration. But that simply wasn't possible with Billy Joel. The best I could hope for was that the relationship didn't get damaged.

And this underscores the conundrum that an artist like Billy Joel faces when performing. Which master does he serve? He's got lifelong fans like me, the ones who know his catalog backward and forward. He's got the casual fan who's going to go nuts during Piano Man and We Didn't Start the Fire and sway politely through the rest. He's got his own strong critical appraisal of his work. And he's got his 9-piece band who deserve to be challenged and showcased. And he's also got too many hit songs to play them all.

The show I saw was a valiant attempt to serve all of these masters. For reference, here's the setlist:

You can see that it was very hit heavy, with only Zanzibar and Vienna going deep into the catalog (both sounded fantastic, incidentally). The latter, by the way, was one of two times Billy gave the audience a choice. He said, "We can't play 'em all, so we might as well let you choose." Every other song appeared on one of Billy's greatest hits albums. Well, not Highway to Hell, which was truly bizarre. When I told my wife how it grated me that he wasted a precious slot on a novelty cover, she pointed out that it was likely just a way to give Billy's voice a break.

My only other point of discontent was the fact that there was an opener. This is nothing specifically against Gavin DeGraw, who made what he could of a thankless gig, but more about the principle. By my reckoning, if you're an act of a certain caliber, you don't need an opener. Billy is clearly of that caliber.

Anyway, all this got me to thinking: What would my ideal Billy Joel concert have been?

First, I think Billy needs to abandon the idea of an opening act. Rush, believe it or not, is an exemplar for this. The two times I've seen them they've had no opener, instead doing two sets with a strictly timed intermission between. I think this is a perfect format. It allows for two distinct sets and a voice break in the middle.

So I've used that format for my ideal concert.

Encore
1. Tell Her About It
2. The Stranger
3. It's Still Rock and Roll To Me
4. Famous Last Words

I'd like to think this list works not only in service to me, but would also answer those other masters. It still has 18 hits on it, enough that a casual fan would get plenty of moments. And, as I said above, a concert is the perfect opportunity to turn that casual fan into something more. That's why I included what I consider to be some of Billy's best non-single songs, ones like Miami 2017 and Rosalinda's Eyes. And there's still plenty of room in these songs to highlight the band's versitility, both individually and collectively.

I'll wrap by saying that the concert I saw by no means damaged my relationship with Billy's music. He was in a warm, funny mood, and The Longest Time was particularly chill-inducing. And the fact that I've now seen Scenes from an Italian Restaurant and An Innocent Man live? That's incredible. But it was a weird circumstance in which to see someone whose music I have so intensely personalized. There were nearly 20,000 other people there in that huge cavernous place, so I couldn't help but feel a bit distanced from the songs I hold so close to my heart.

That, unfortunately, is a problem that can't be solved by a setlist revision. Unless of course Billy wants to play at my house sometime.

Billy, it's a standing offer.