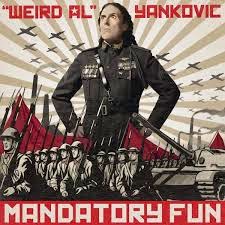 Back in 2010 I did a review of every single "Weird Al" album, and though I've all but sworn off doing reviews of new albums, I can't let the collection go incomplete.

(I've also done every-album-reviewed projects for The Beatles, The Monkees, Talking Heads, and XTC, so if any of them put out a new studio album I'll review it - though I think I'm pretty safe.)

So Al is back with his 14th effort, Mandatory Fun. This is the last record of Al's contract, and in multiple interviews on the promotion circuit he has claimed that this may be his final proper album. In order to keep up with the zeitgeist, he's more likely to do digital singles and EPs that can be released quickly and without the laborious machinations required of a  physical record release. I think this strategy makes sense, especially given the success of his 8-videos in-8-days promotional strategy during the week of the album's release (which certainly helped Al get his first number 1 album on the Billboard charts).

Before I start, just a note on bias. My 2010 reviewing binge revealed some persistent criticisms of Al's work. I detailed those here. If you don't feel like clicking the link, they were, in short: 1) Overuse of crazy lists and the first person, 2) the title of the song being the extent of the joke, 3) immaturity, and 4) musical thievery on style parodies. My running joke has been that none of this will matter if you are a boy between 11 and 15 (as I was when my ardor for Al was most passionate), but keep in mind that this is my frame of reference as I review.

So, here we go, using the same reviewing format I used for all of his other albums.

Parodies:
Handy takes on Igga Azalea and Charli XCX's hit Fancy, turning it from a bragfest about fanciness to a bragfest about handiness. If this tool-fixation sounds familiar, it's because Al had a style parody called Hardware Store on Poodle Hat. And - if you're a real Al aficionado - you might know his unrecorded Rembrandts parody I'll Repair for You. Repeated subject matter aside, this song is a perfect example of an unintended purpose Al's parodies serve. Namely, Fancy, to me, is a song that's irresistible musically but mind-numbing lyrically. Thus, I can enjoy Al's version as a substitute. Bonus for the line, "Let me be your stripper / Taking off lacquer, no one does it quicker."

Lourde's Royals becomes an ode to Foil in Al's hands. At first it seems he's going to do the typical thing and run a one-note joke about food into the ground, but then at the halfway point the song turns into a conspiracy-theorist-wearing-a-foil-hat rant. Bonus points for subverting expectations.

Word Crimes is a parody of Robin Thicke's and Pharell's and T.I.'s Blurred Lines. For me, this is the same deal as Handy: Love the music of the original (thanks, Marvin Gaye) but don't like the lyrics (though the version with Jimmy Fallon and the Roots was an improvement). So now I can enjoy the music with an extra dose of grammar correction. I feel bad for the scores of middle school students who will be forced to listen to this in English class this coming school year. I predict Word Crimes is going to be to English classes what Billy Joel's We Didn't Start the Fire was to social studies classes back in the day. My favorite line, by the way, is "You should never / write words using numbers / Unless you're seven / Or your name is Prince."

Imagine Dragons' Radioactive, a song I am not aware of ever having heard, becomes Inactive. Perhaps appropriately, considering the subject matter, this is the only parody on the album that finds Al lazily reverting to his worst tendencies. So, it's a crazy list song in which the title is the extent of the joke. Oh well, four out of five ain't bad.

Finally, there's Tacky, Al's take on Pharrell's Happy. It was a good idea to combine the stylistic and behavioral definitions of the word because it gives the song variety and unpredictability. My favorite tacky moment: "I Instagram every meal I've had."

Style Parodies:
Lame Claim to Fame is another crazy list song, a cowbell heavy take on the Southern Culture on the Skids sound. The narrator mostly tells us about close encounters with various celebrities (a fact that will, in 20 years or so, make this song an interesting document of our current times). Anyway, here are my three favorite lame claims to fame:
-"I got an e-mail from the prince of Nigeria"
-"I posted first in the comments on a YouTube video"
-"I got a guy who knows a guy who knows a guy who knows Kevin Bacon."

Next, Al tries his hand at writing a college fight song and comes up with Sports Song. The lyrics gently mock the boastful nature of these songs, boiling them down to their essence: "We're great / And you suck." The music doesn't quite have an anthemic feel or any repeat listen value, but I'm sure it will get some love from marching band conductors and stadium DJs across the country.

The Foo Fighters scream rock style gets a nod in My Own Eyes, another crazy list song, this time about odd things the narrator has witnessed. It's a plus that the style is recognizable without directly calling to mind a specific Foos song, but the song itself isn't memorable.

Mission Statement takes tortured corporate lingo and puts it to the harmonious sounds of Crosby, Stills, & Nash. I love the idea behind this one; when worked in an office job, I used to shake my head at the borderline nonsensicality (and, oh Lord, the mixed metaphors) that poured from the mouths of the higher ups during meetings. Suite: Judy Blue Eyes is the touchstone here as Al harmonizes beautifully with himself.

First World Problems' titular phrase is a modern meme, but the theme of a problem being a relative concept goes all the way back to Buckingham Blues (which detailed the "it-must-be-tough" lifestyle of royalty) on Al's debut. It's oddly refreshing to see that come around full circle. Musically this a tribute to one of Al's favorites - The Pixies - and features Amanda Palmer in the Kim Deal role.

The album closer (and the final song on Al's final album?) is Jackson Park Express, a seventiesish epic that owes a debt to Harry Chapin and Cat Stevens.  In a recent interview, Al called it one of his favorite things he's ever done. Maybe that's because it's a long song (see: Alberqurque, The Biggest Ball of Twine in Minnesota, Trapped in the Drive-Thru), a twisted love song (see: You Don't Love Me Anymore, Since You've Been Gone, If That Isn't Love), and a crazy list song (see: One out of every three songs Al has recorded) all wrapped into one. So your enjoyment of it depends on how much you like those aspects of Al's shtick. Personally, I only like the twisted love song aspect, and unfortunately it's been done better before. This tune is mostly just a list of the ridiculous things the couple say and think about one another. It's probably funny if you're an adolescent, but there's nothing layered or complex about it in the way of the very best types of humor. Random thought: Given that this song takes place exclusively on a bus, is it possible that Al was knowingly bringing his career full circle? After all, the parody that launched him into fame was Another One Rides the Bus. If so, cool. If not, still cool.

Polka Medley:
This bit never gets old. If you listen to all of Al's medleys from Polkas On 45 (1984) to present, you can get a pretty comprehensive 30 year overview of music history. The latest installment is titled NOW That's What I Call Polka, a title I can't believe Al hasn't used before now. The songs done polka style are: Wrecking Ball (Miley Cyrus), Pumped Up Kicks (Foster the People), Best Song Ever (One Direction), Gagnam Style (Psy), Call Me Maybe (Carly Rae Jepsen), Scream & Shout (will.i.am feat. Britney Spears), Somebody I Used to Know (Goyte feat. Kimbra), Timber (Pitbull feat. Kesha), Sexy and I Know It (LMFAO), Thrift Shop (Ryan Lewis and Macklemore), and Get Lucky (Daft Punk feat. Pharrell).

(One thing we've learned is that the post-2000 musical landscape can be partially defined by the "featuring" credit. Imagine if they'd always done this. You're So Vain by Carly Simon feat. Mick Jagger. Tempted by Squeeze feat. Elvis Costello. Money For Nothing by Dire Straits feat. Sting. I could go on and on.)

Overall:
While I'm glad to see Al avoiding some of his worst tendencies (the parodies being fairly strong, the immaturity at a minimum, musical thievery mostly absent), Mandatory Fun is a strictly middle-of-the-road affair. It's very workmanlike, and only flirts with transcendence.

References to TV: 2 (Interesting that in the golden age of television, Al has become less interested in singing about TV and more obsessed with the Internet; there are at least 5 specific websites mentioned throughout the album.)
References to food: 4
Grade: C+
Fave Song: Word Crimes