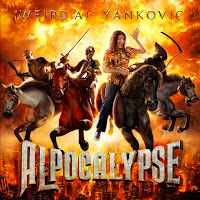 Just when I thought I was out...

Last year I did a marathon review-every-"Weird Al"-album project. Honestly, it was more "Weird Al" than any person should have to experience in a short period of time. But now, Al's back with a new album, Alpocalypse, and duty compels me to throw in my two cents.

I actually already wrote about 5 of these songs, because Al released them 2 years ago as the Internet Leaks EP. I wrote then that this was somewhat of an odd strategy, and I still feel that way. It essentially means that a little less than half the new album is actually new. It's also disappointing because, as you'll see, I didn't much care for 4 of the 5 songs on the EP.

Following the format of my past "Weird Al" reviews, let's take a look at Alpocalypse.


Parodies:
The album leads off with Perform This Way, a take on Lady Gaga's anthem Born This Way. There was apparently a misunderstanding about this song, with Al going to great lengths to get the tune approved (he won't parody a song without the original artist's permission) only to have Lady Gaga refuse at the last minute. Once he went public with the story, however, she promptly changed course, claiming she'd always intended to let him release it. As it is, the back story is actually more interesting than the song's lyrics, which amounts to little more than "Lady Gaga does weird stuff, doesn't she?"

TMZ uses Taylor Swift's You Belong To Me to comment on rabid celebrity trash journalism. The song wisely places equal blame on the members of the media and the celebrities themselves, as evidenced by the line "It's getting to the point where a famous person can't even get a DUI or go on a racist rant."

Miley Cyrus' ubiquitous Party in the U.S.A. becomes Party in the C.I.A., and like the best Al parodies, the juxtaposition of the source material and lyrical subject matter is ultra-effective. Thus we end up with hilariously absurd lyrics such as "staging a coup like yeah / brainwashing moles like yeah." This is the best parody on the album. And while that isn't saying a whole lot, it doesn't diminish the quality of the song.

Whatever You Like is a parody of the 3-year old T.I. tune of the same name. I already went into detail on this one (follow the link above). In summary: I'm not a fan.

Finally, Another Tattoo is a Crazy List song based on Nothin' On You by B.O.B. and Bruno Mars. Like all the parodies on Alpocalypse (save Party in the C.I.A.) it's passable but by-the-numbers. In other words, Al's not really pushing his craft or anything.

Style Parodies:
Of the four style parodies that appeared on the earlier EP, Skipper Dan is the clear winner. It's got heart, doesn't go for the easy jokes, and manages to musically recall its source material (Fountains of Wayne, though other reviewers have claimed Weezer; I don't see it) without ripping it off. The other three, Craigslist (a Doors riff), Ringtone (a Queen riff), and CNR (a White Stripes riff) vary in quality, with none particularly floating my boat.

If That Isn't Love finds Al taking on the style of Hanson. This seems random and left field unless you know that Al is friends with the brothers, having directed a handful of videos for them. The song boasts a decent melody, and - get this - the theme is actually mature (namely that being part of a couple is more than just the sweet stuff) though the specifics aren't. It's riddled with sophomoric references to butt cracks, farting, obesity, boogers, spastic bladders, and so on. Despite that, it's one of the better songs on the album.

In latter years, Al's obsession with TV has been replaced by a fixation on computers. He has devoted songs to eBay (eBay), Craigslist (Craigslist), core processors (It's All About the Pentiums), viruses (Virus Alert), and illegal downloading (Don't Download this Song). So here's a tune about chain e-mails, Stop Forwarding That Crap To Me. The song is in the bombastic, multi-movement style of Meat Loaf's work with Jim Steinman (Paradise By the Dashboard Light, I'll Do Anything For Love, etc.). There are some good moments, especially when Al touches on how quickly misinformation spreads on the Interweb, with the conclusion, "I have high hopes that someone will point you toward Snopes and debunk that crazy junk you're spewing constantly."

As is consistent with his work in the last 15 years, it feels like Al is mostly going through the paces, with an exception here or there. But, as always, add a letter grade if you are a boy between the ages of 11 and 15.