Oh, Weezer. What more can we say about you? You've made us love you, made us hate you, made us question your sanity, made us question our sanity. Just when we think maybe we can embrace the strangeness (2009's Raditude), you throw out something like 2010's terrible Hurley (I actually lost 5 I.Q. points while listening to Where's My Sex). And not even the fans or critics can agree on when you are actually being more terrible: The Metacritic rating for Ratitude is 57; Hurley's is 68.

You know things have gone wrong when someone starts an online fund-raising campaign to get you to quit making music, as James Burns did in the fall of 2010. Said Burns, "I beg you, Weezer. This is an abusive relationship, and it needs to stop now. If we reach at least $10,000,000, then we get the chance to possibly stop hearing about a shitty new Weezer album every goddamn year." (Burns has since suspended the campaign, having proven his point).

I usually hate when critics and fans pile on the they're-not-as-good-as-they-used-to-be bandwagon. It always seems so closed-minded and cynical. It seems to disallow others the right to discover something wonderful that I just can't see because of whatever blocks I've put up. But Weezer present a strong challenge to my open-mindedness. In their case I feel completely justified in saying that they've lost their magic.

HOWEVER, let's not focus on the bad for once. Let's look at what gave us such high expectations for Rivers, Brian, Patrick, and Matt/Mikey/Scott in the first place. If you know anything about the last 15 years of pop music, then you probably know which two Weezer albums will contend for the top spot: their 1994 debut, Weezer (a.k.a. The Blue Album), and the 1996 follow-up Pinkerton.

So which is it? Both receive perfect 5 star ratings from the All Music Guide as well as Amazon.com. This is where we have to get picky. So I looked at the percentage of 5-star ratings on Amazon.com. Weezer has 88%. Pinkerton has 86%. It doesn't get much closer than that folks. Now, I could spend this space debating the relative merits of each album, but for simplicity's sake, I'm going to let the Blue Album stand as winner. I'll give Pinkerton its due before I wrap up. 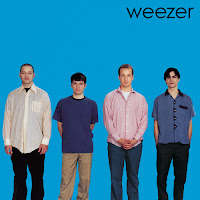 Over on Amazon.com, Stu Schroeder is feeling the same vibe: "Not only is it the best album in Weezer's catalog, but it very well could be song-for-song the most consistent 40 minutes in music history." Josh Reynolds continues the hyperbole, claiming that Weezer is "everything you can want in an album and you can never get bored of it." And Grant Jordahl finds the album to be "perfect for driving and doing homework!"

Many Amazon reviewers believe the album to be a must-own:
Still others assert that Weezer have not topped their debut. Samot says, "I really don't think Weezer ever made a more consistent, more infectious, or more charming album than this one." And Alex contends that "Weezer might have written great songs in the future, but they never were able to recapture this sound again, and that's probably why everyone remains so nostalgic for their past."

Surprisingly, there are very few mentions of Pinkerton at all. In fact, the Amazon.com reviews are much more concerned with comparing the Blue Album to other watershed '90s albums, like Nirvana's Nevermind and Oasis' Definitely Maybe. And then there's Oliver Eckles: "This is the best rock album since Led Zeppelin's Houses of the Holy." Okay, sure.

I'm partial to the Blue Album myself. In fact, if the totalitarian Obama administration gets their way and forces me to give up my constitutional right to own more than 10 CDs, it might make the cut. A big part of it is nostalgia. The Blue Album hit me at the exact right time in life and I was completely susceptible to its wiles. But at the same time, its charm hasn't worn over the years. I still thrill over the quiet/loud dynamic of Say It Ain't So, cringe at the naked jealousy of the narrator in No One Else, and still completely understand wanting a girl that looks like Mary Tyler Moore (circa 1965). In the Garage is probably the best four minute description of outsider adolescence that exists, and The World Has Turned and Left Me Here always sends me into a fugue-like revelry.


I like Pinkerton too, just not as much. Plus, I hate the half-truth legend that has formed around it. Yes, not many people liked it when it came out (myself included). Yes, it grows on you. Yes, it's a good record. BUT - lazy rock critics listen up - it DID NOT create emo. Emo started in the mid-'80s, 10 years before Pinkerton. Bands like Rites of Spring, Jawbreaker, and Sunny Day Real Estate got it going. Bands like Braid, Jimmy Eat World, Promise Ring, and Get-Up Kids all formed, played shows, and/or made albums before Pinkerton came out. Maybe a lot of current emo bands cite it as an influence, but that doesn't mean it created the genre. Pinkerton is also portrayed as being a dark and tortured record, but really only a handful of the songs fit that bill. A good portion of the album is actually kinda funny (Tired of Sex, El Scorcho, Pink Triangle, The Good Life).

So let's conclude with a moment of silence for Weezer. They may continue to put out albums, appear on TV and magazine covers, and put out the occasional irresistible single, but it's clear that we really lost them somewhere in the the murky fog of 1996.

Allen Lulu said…
Doesn't that leave you thinking that Matt Sharpe was the driving force of all that was really great about Weezer? That it was the combination of Cuomo and Sharp that made it work?
After that, they are a singles band at best. Nothing is worse that the Red Album in their catalog. While most people hate Make Believe I believe it has some of their catchiest songs. I even bought Hurley and didn't mind it in the least, although, that one song, "Where's my Sex" is atrocious.
Good call on the Blue album. And where's you best of the year that I have come to look so forward to? Without you I never would have met Elbow.
12:50 PM

Paul V. Allen said…
I had that same thought about Matt Sharpe; I just wasn't sure where to fit it in. Thanks for bringing it up!

Anonymous said…
I'm not one to jump on the "not as good as they were" bandwagon either... I never thought Weezer was THAT amazing to begin with! I owned the original Weezer album back in the day (mainly because all my friends told me how great they were) and I saw them in concert in (I think it wAS) 1995. To me, they were making tuneful, catchy, competent pop-rock in my mind. I wasn't blown away by them.

Although, to be honest, I think they have gone from "relatively innocuous" and "occassionally pleasant" to almost downright obnoxious and difficult to stomach... so in a way, I guess that IS saying they're not as good as they once were... -G.
1:58 PM