January 24, 2011
"If you only own one album by The Monkees it's gotta be [insert masterpiece here]."


* * *
I spent a lot of time on the Monkees back in 2009, reviewing all 11 of their albums, plus a compilation and a '70s half-revival. I devoted a lot of words to the "pre-fab four" but one thing I didn't officially determine was which of their albums is the best. If compilations were allowed, I'd go with Then & Now...The Best of the Monkees and call it a day. But since rules are rules, we have to look elsewhere.

The All Music Guide finds there to be no perfect Monkees album. The two highest-rated albums are 1967's double shot of Headquarters and Pisces, Aquarius, Capricorn, & Jones Ltd with 4.5 stars each. Amazon.com reviewers are kinder, bestowing 4.5 stars on five Monkees albums (their debut, More of the Monkees, Head, and the two mentioned above). With a slightly higher percentage of 5 star reviews on Amazon, Headquarters takes the Rock Solid title. 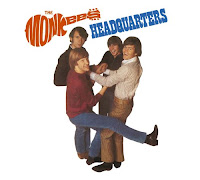 Now I may be slightly hypocritical here in supporting this choice. See, I balked at Tumbleweed Connection as Elton John's Rock Solid because it isn't representative of who he is as an artist. Likewise, Headquarters, because it was recorded by the group alone (instead of the usual studio musicians) and features no huge hits, is not truly representative of who the Monkees were, at least in public perception.

HOWEVER (and here's where the critic attempts to explain away his double standard), I feel Elton is one of the rare artists who is perfectly rated. That is to say: He's not overrated or underrated, he's just rated (thanks to Chuck Klosterman for this concept). The Monkees, on the other hand, are both overrated and underrated. Diehard fans won't hesitate to compare them to the Beatles, despite the fact that several sections of their catalog are abysmal; anyone who tells you otherwise has not spent enough time listening to Your Auntie Grizelda. At the same time, they are not nearly given enough credit for their talent, staying power, or spirit of experimentation. One listen to Headquarters proves that.

There's also the matter of intention. Way too much of the praise heaped on Tumbleweed Connection was some form of "Elton John is usually rubbish, but this is a great album!" In other words, it was backhanded complimenting. Headquarters' accolades feature none of this faint praise.

That cleared up, let's move on to the critic and fan perceptions.

The All Music Guide's Tim Sendra calls Headquarters a "dynamic, exciting, and impressive album." He says what it lacks in hits it makes up for in good songs, and that the Monkees proved "they were legitimate musicians with enough brains, heart, and soul as anyone else claiming to be a real band in 1967."

On Amazon.com, fan reviewers echo these sentiments. Clark the Shark shouts, "WHAT A SHEAR [sic] MASTERPIECE FOR ANY BAND/...LET ALONE A BAND THAT ISN'T EVEN A BAND." Steve Cronen doesn't shy away from comparisons: "Revolver. Exile on Main Street. Who's Next. Blonde on Blonde. These are some of the best albums ever. Headquarters, the album on which the Monkees broke free from their 'manufactured pop' image, ranks right along with 'em." And Sebastian Davies claims that Headquarters "is the album that proves it don't take great musicians to make great music." Um, thanks, I think?

The album's do-it-yourself nature (though the Monkees didn't write all the songs themselves) also inspires some anachronistic hyperbole. "I venture to say Headquarters would be labeled an indie pop masterpiece had it been released now by a bunch of no names," says Jeff Lekson, starting us off easy. Next, JK Baxter claims the album is "at heart, a garage band tour de force...the force behind this album is just so raw, I even want to use the word 'punk' here!" And William brings it all home: "This is the Sex Pistols had they stuck it out for another four albums."

And then there's this anonymous review, which I'll let speak for itself:

This has got to be the greatest album of all time. i will give anyone who disagrees the worst pinchet of all time. sunny girlfriend is the best monkees song ever recorded, when i rule, it will be a national song. this album shows how great Mike Nesmith really is. i got to meet him once, he shook my hand told me that i was a failure and said that i had to shave my sideburns because he invented them, then he punched me in the face. You can see why i like him so much. he hates animals just like me. i like my rabbit and he is my best friend. my bird is El's best friend but i hate it and it will pay the ultimate price if it ever hisses at me. she is also best friends with someone who sits in an empty bathtub and freezes.I think that is why i like this album so much because when played backwards it gives you the secret recipe to make a flaming golpangis and talks about bornage.

Overall, it's hard to deny Headquarters its place at the top, either musically or sentimentally. I'd have to put it as my own personal favorite of their proper albums, as well. And that's with or without the bornage.

Author's Note: For more, read my original review of Headquarters.

(although I love Your Auntie Grizelda, and named my record company after it. Dolenz was amused/bemused when I gave him one of the business cards.)
9:42 PM