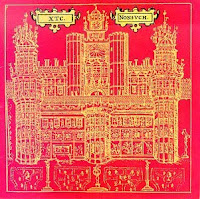 Nonsuch is the 10th XTC album, but it was the 3rd for me, purchased at a Circuit City for $5.99 in the infancy of my XTC fandom.

At the time, I didn't know much about the band other than that I wanted more of their music. I already owned Oranges and Lemons and Waxworks (a collection of early singles), and wasn't sure where to go next. I bought Nonsuch because I thought it was a latter-day "best of" compilation. 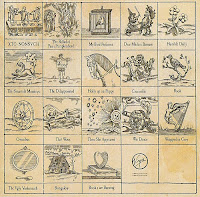 Why did I think that? Well, the sheer number of songs (17!) was one factor, but mostly it was the back cover. Each track was given a box and an illustration, lending it an air of individual importance. Plus, the album title seemed like a insouciant nod to the thrown-together nature of hits collections.

And though a listen and a look at the interior liner notes proved me wrong, I'd still say I wasn't too far off. Afterall, Nonsuch does contain all of XTC's major themes: the peaks and valleys of romance, war, human nature, and societal ills. Musically it falls somewhere between the pop sheen of Oranges and Lemons, the melody of Skylarking, and the earthiness of earlier albums such as English Settlement and Mummer. In fact, I'd say there's no better album to summarize who XTC were from 1982 on. So in that spirit, it is a latter-day "best of."

The album had a fractious creation. Lead songwriter and singer Andy Partridge clashed with veteran producer Gus Dudgeon (he of Elton John-producing fame) on several occasions. But you'd never know that from the harmonious result. I use the adjective "harmonious" explicitly because Nonsuch is the most Beach Boy-ish album XTC ever made, and that includes the Dukes of Stratosphear albums and Apple Venus Vol.1.

Witness: Humble Daisy (a love song with evocative imagery), The Disappointed (an elegant break-up tune), Then She Appeared (another love song, full of cultural and historical references such as Edward Lear, Marie Celeste, and Fox Talbots gel), and Wrapped in Grey (an anti-cynicism anthem that's easily one of the top 5 most beautiful XTC tracks) all feature soaring melodies and generous harmonies, either overtly or subtly nodding to Brian Wilson and company.

All four of those songs were by Andy Partridge, who was on quite a hot streak. His highlights on Nonsuch are many. Opener The Ballad of Peter Pumpkinhead (remade later by Crash Test Dummies for the Dumb and Dumber soundtrack) is about a secular savior who unites the people beyond church and commercialism with a message of love and ultimately pays for it with his life (fittingly, his crucifixion plays out on live TV nonetheless). It's probably what would happen if Jesus came along today. The catchy Dear Madam Barnum features one of Andy's best extended metaphors, casting a cuckolded husband as a clown that quits from the circus: "Children are laughing as I fall to the floor / My heart's torn and broken / And they just scream for more / If I'm not the sole fool who pulls his trousers down / Then dear Madam Barnum, I resign as clown." Closer Books are Burning is simultaneously a scathing condemnation of those who would burn literature containing ideas they disagree with (Gainesville, Florida, we're looking at you here) and a love letter to the printed word (Andy describes books as "a wisdom hotline from the dead back to the living" and "the human right to let your soul fly free and naked"). Listen for the dueling guitar solos at the end to compare Andy and guitarist Dave Gregory's respective playing styles.

A step down in quality, but still pretty great are Holly Up On Poppy (an sweet-but-not-saccharine ode to Andy's daughter Holly, who's now a musician in her own right), Crocodile (a countryish exploration of jealousy), Omnibus (a light-hearted admonishment to Gregory to take advantage of being an eligible bachelor: ""Don't waste time, go on and taste them all / Why don't you fill your plate?"), and The Ugly Underneath (a spiritual companion to Billy Joel's The Stranger).

Rook is not a song I especially love, but it is one I admire. A dirge with a Bachrachian arrangement, it features mysterious lyrics about death, ending with a plea: "If I die and I find that I had a soul inside/Promise me that you'll take it up on its final ride." Maybe some regrets about Dear God there?

By my rekoning, Andy's only misstep on the album is That Wave, and even it has it's charms. The distorted vocals on the "chorus" are annoying, but I like the "I was in heaven / Address cloud 11" bit. And it gets points for containing the term "permanent orgasm", which would be a great band name.

Bassist and second songwriter Colin Moulding doesn't do too poorly for himself either. My Bird Performs finds the usually-dour Colin in a rare self-satisified state of mind. Though I believe the title phrase is meant to be taken literally, one can't help but notice that "bird" is British slang for "girl." So there's a little bit of a Andy-worthy double entendre here.

The Smartest Monkeys is probably the weakest song of Colin's four. The melody and prog pop production are great, but the lyrics fall short under scrutiny. I like the basic idea that, despite what we'd like to think, human beings haven't really come all that far from our primate ancestors. My main problem is that Colin couches our lack of progress in the issue of homelessness. I think he should have gone bigger than that. He does just that on his third song, War Dance, which concerns the frightening lead-up to war and the accompanying spike in ham-fisted patriotism and jingoism. Sound familiar? He was writing about Britain's involvement in the Gulf War, but it's a universally applicable song. To me, it's one of Colin's all-time best.

Finally, there's Bungalow, an oddly-affecting, slow-building track about a dream home by the sea.

All-in-all, Nonsuch is a magnificent achievement, and the culmination of who XTC were as a trio (not to undermine the fine drumming contributions from Dave Mattacks). It's not only my favorite XTC album, but one of my favorite albums ever.

Nik said…
Yes, this one just gets better and better over time. I'd be hard pressed to pick their "best" but this is right in the mix.
3:11 PM

Uncle E said…
This is a fantastic album, but aren't they all? The thing about XTC, that I've noticed, is that every fan has their favorite and they hardly agree on a single one. I waffle back and forth between Drums and Wires, Oranges and Lemons, and Skylarking myself. But this is certainly up there.
9:54 AM

kingofgrief said…
My second-favorite XTC long-player after Skylarking. I usually play "Books are Burning" on my show every year for Banned Books Week, which was just observed. Unfortunately, my copy of Nonsuch couldn't be located in time, so I went with..."Read 'Em and Weep" by Meat Loaf. (Yeah, yeah, a tenuous connection at best, but time was a factor.)

If I could change just one thing about your review, I'd take this sentence...

"...Nonsuch is the most Beach Boy-ish album XTC ever made, and that includes the Dukes of Stratosphear albums..."

and insert the parenthetical "(with the exception of 'Pale and Precious')". Their love for Brian never got any more blatant than that.
12:59 AM