August 31, 2009
Author's Note: I wrote this piece in 1998, between my junior and senior years of college. I had just read Nick Horby's High Fidelity, and it loomed large in my mind. The piece was printed my college newspaper, the Augustana Observer that same year. I present it here (mostly) as it appeared there. 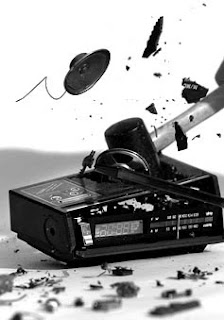 There was a troublesome stage of my youth when I had insomnia for a ridiculously long series of nights. I would lay in my bed sometimes three to five hours with no sleep, my mind a tangle of confused thoughts and anxiety. My parents only advice: Listen to the radio before you go to bed, it’ll calm you.

I know one thing, that radio was my insomnia’s worst enemy. The songs were almost inevitably about something complex, with minor chords and sad lyrics. I hated the radio.

It soured me on listening to music for a long time. Oh, I would tune in to Casey’s Top 40 to hear Milli Vinilli, and I almost never missed the “Top Five at Nine” where “Do the Bartman” was always number two. But MTV was never on in my house (I missed a lot of good videos), and the only music I ever bought were “Weird Al” Yankovic tapes. And life was grand with just Al and me.

Later there was K-Mart, where I worked for two long years and was subjected to forty hour-a-week exposure to “The K-Mart Radio Network”. How many times can one man listen to Afternoon Delight and Seasons in the Sun and keep his wits about him? I seemed in no danger of being corrupted by pop music.

But the musical fates would not let me be. In late 1993, my best friend mentioned that he had really been into the Beatles lately. On a whim I bought a greatest hits tape and within two weeks I had at least seven tapes. I immersed myself in the lads from Liverpool. I bought biographies and read them voraciously. I watched documentaries attempting to become a Beatle expert. When I got a CD player the next year, the first CD I bought was Revolver.

And then an unfortunate thing happened. When I became briefly burned out on the Beatles, I found myself with a desperate need for more pop music. I had become a junkie, a pop music addict. I started out with groups who were significantly Beatle-esque: Oasis, Elton John, XTC. Then I began seeking out bands I had loved as a kid: the Monkees, Van Halen, the Beach Boys, the Police. And this led to more. The early to mid-'90s, was a great time for new music. I got into R.E.M., Talking Heads, They Might Be Giants, Toad the Wet Sprocket. Each group I listened to and liked led me to another group. My CD collection grew uncontrollably.

That's not even the worst part. As I became more and more saturated with pop music, the quality of my life diminished. It was subtle at first. I began to wake up in the mornings with that distinct feeling that something was terribly wrong. Not being able to attribute that feeling to anything, I wandered aimlessly through my days, restless and hazy. My grades began to drop, my friends stopped calling, my parents grew to strongly dislike me; even my dog shied away. One day I awoke to a Police song on the radio (Wrapped Around Your Finger), and despite never having been in a situation remotely like the one described in the song, I found myself desperately wanting to.

I genuflected. Why would I want to succomb to a manipulative, slightly evil woman, as the song seems to detail? What if the music was messing with my psyche? What if those pop albums were screwing with my brittle emotions? What if I was purposely making my life worse just to identify with sad, tortured songs, while at the same time robbing myself of the better life hinted at in the happier songs? I became afraid.

One day soon after, I was enjoying pizza at a local establishment. On the placemat, I read about scientific study under the heading “Did You Know?”. It said that in the 1970s, experiments proved that plants relentlessly exposed to pop music died quickly. That was all the proof I needed. No way was I going out like a plant. So I went home, disconnected my stereo, packed up my CD’s, and sold them away.

My life immediately improved. My parents loved me again, I got on the dean's list, the dog returned to my lap, and I began to once again find myself with social plans on the weekend.Take it from me, pop music is evil. Sure, if you must, keep on listening to your John Coltrane and Mozart and Vivaldi, but heed my warning, avoid pop music. It will destroy your life. Oh, an occasional Tears of a Clown or Vogue won’t do too irreparable harm, but go no further than that!

As for me, I’m still recovering. I’m trying to be “clean”, but every once in awhile you might catch me as I’m walking to class, humming a few bars of We Can Work it Out with an embarrassed smile of indulgence on my face.