August 17, 2009
In January of this year, I decided that I would take on the task of relistening to and reviewing every single Monkees album. Boy, am I glad to be done with that project. I've done the same concept before, both faster (every Talking Heads album in two weeks) and larger (all 15 Beatles releases), but this one somehow felt more epic. Perhaps it was the rollercoaster history of the group, or the variable quality of the releases, but it was sort of exhausting. 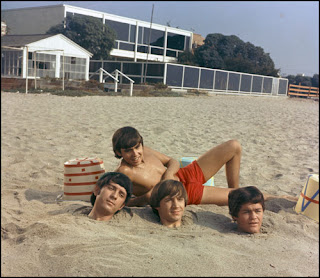 What conclusions, one might ask, did the reviewer draw from the experience? Well, most of all, I find my admiration of the Monkees concept and execution to be as strong as ever. This is despite the many wonky decisions made by those involved. I also think that the Monkees' story, when viewed as a whole, is a sad one, despite all of the joyful music they made. I have the feeling that Davy, Peter, Mickey, and Mike will never be fully appreciated for their contributions to pop music history (certainly it'd be a huge surprise if they ever made it into the Rock 'N Roll Hall of Fame).

Do you want more Monkees? Maybe read my review of the '80s reincarnation of the band, the New Monkees. Then seek out the Missing Links CDs from Rhino. I declined to review them, but all three volumes feature many great tunes that never made it on to a Monkees album (even as bonus tracks). They really are a testament to the improbable amount of quality material the Monkees were able to create in a very brief window of time (basically less than 4 years). Plus, where else are you going to find (Theme from) the Monkees in Spanish? Finally, Monkees fan Al Bigley found me via these reviews, and shared his podcast, which contains lovingly remixed versions of several Monkees tunes. AND, Dartman's World of Wonder is doing A Month of Monkees, with several imaginative and informative posts (plus MP3s).

That should keep you busy for awhile.

As for me, you might be wondering who's catalog I'll take on next. Believe it or not, I've chosen to take on another titan of my musical youth, "Weird Al" Yankovic, and all 12 of his albums.

Allen Lulu said…
Commendable. I am a huge fan of these projects. I even patterned my "Listening Post" project after it.
You are a better man than I. I'm in the middle of Sonic Youth and about to toss in the towel.
7:00 PM

Anonymous said…
Excellent. I am looking forward to your trip through Weird Al's catalog. He is a much much better songwriter and musician than he's usually given credit for. ~OE
7:20 PM