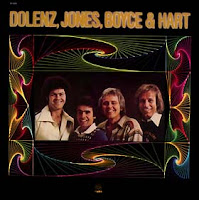 If you, like me, thought it was weird that the Mickey Dolenz and Davy Jones made an album as the Monkees (Changes), then wait till you get a load of this.

In 1976, the Monkees had been dormant for 6 years. However, reruns of the old show were airing on Saturday mornings, generating some renewed interest in the band. An offer came around, as offers will, for the band to reunite. Peter Tork and Michael Nesmith, the two Monkees who quit the band, declined.

So instead, Davy and Mickey got together with Tommy Boyce and Bobby Hart, the duo who wrote many of the Monkees' hits. Unable to use the Monkees name, they choose to go by their last names (though I think Mickey, Davy, Tommy & Bobby has a certain ring to it). Billed as "the guys that sang 'em and the guys that wrote 'em" the band went out on a yearlong tour, which led to an album of new material. There's not much information about how successful the whole operation was, but obviously it wasn't lucrative enough to continue. Their self-titled album serves as a fascinating artifact of the time.

Interestingly, Boyce and Hart only wrote 5 of the album's 12 songs, with 3 more coming from Dolenz and/or Jones, and the rest from various sources. It's also worth noting that Mickey is the lead singer on 7 of the 12 songs, with Davy only taking lead on 1 song (the others either feature shared vocals or Boyce or Hart). Not that I'm complaining, but one might have expected more balance.

The Classics
Dolenz, Jones, Boyce & Hart features no lasting additions to the Monkees catalog. However, there is a version of the classic Dion and the Belmonts tune Teenager In Love. It's a curious choice, considering that all DBJ&H were all in their 30s, but it's actually a very fun version, with Mickey on lead vocals and a banjo serving as the primary instrument.

The Pleasant Surprises
The Dolenz/Jones composition You and I is NOT the same song that appeared on Instant Replay (which was, oddly, also co-written by Jones). Instead, it's a soft rock charmer with a great vocal from Mickey and an infectious chorus.

It Always Hurts the Most In the Morning is another pop standout, with Boyce (who co-wrote the song with Mickey) on lead and Mickey helping out loudly on the chorus. The choral bit at the end is especially nice.

The album's clear winner is I Remember the Feeling, a song that manages to dabble in nostalgia without being derivative. Davy takes the verses while Mickey handles the chorus. Strong background vocals and handclaps drive the proceedings ahead. It's also one of those sounds-happy-but-is-really-sad, as the lyrics reveal that the feeling he remembers is obviously gone. Just an all-around great effort.

Comme Ci, Comme Ca
These songs are just sort of there:

Album opener Right Now is basically a power ballad at heart, with a passionate, warbly vocal from Davy, strings, and a fuzzy guitar solo.

I Love You (I'm Glad That I Said It) is an overwrought ballad from the sadsack perspective (sample lyric: "And if they ever gave rewards for the loneliest story / I'd be there when they give 'em out / And I'd win without a doubt"). Hart (I believe) takes the lead vocal and his voice has a definite Neil Diamond quality right down to the rasp, talk-singing, and emoting.

Sail on Sailor is NOT the Beach Boys song from the 1973 Holland album. It's the second time in two albums the band cops a Beach Boys title (the other was was You're So Good To Me on Changes). Here's a note to aspiring musicians: Don't steal a song title unless you're sure that your song is better. This one isn't, but it is an island tune. The presentation is intriguing in that each band member takes a verse, joining all together on the chorus. Or at least that was the intention. Mickey's verse is missing from the song, even though it appears on the lyric sheet.

Side two opener Moonfire owes something to Yes, with its heavy electric guitar, strong rhythm, as well as the dreamy, sci-fi bent of the lyrics. It was written by Bill Martin, a songwriter who had written a couple of earlier Monkees tracks (All Of Your Toys and The Door Into Summer, notably).

A couple of songs truly feel like The Monkees 2.o. The laboriously-titled You Didn't Feel That Way Last Night (Don't You Remember) is like (I'm Not Your) Steppin' Stone with keyboards and worse lyrics (if you wrote the song you're ripping off, does it count as plagiarism?). Even so, Mickey tears into the vocal. And Sweet Heart Attack doesn't bring to mind any specific Monkees song, but has that same feeling, only with a '70s production sheen.

WTF?
Along Came Jones... the Leiber and Stoller song originally done by the Coasters and covered by Ray Stevens in 1969 is a curious addition to the record. It's a western comedy tune, and an excuse for everyone to ham it up. I'm sure it was fun for the band to perform live, but the novelty wears off very quickly.

Savin' My Love For You, the other Dolenz / Jones compostional collabo is the only truly dated song on the album. It's the Monkees do disco, something that was probably inevitable if you think about it. Thankfully, this song seemed to get it out of their system.

Also worth a head-scratching mention is that the second side of the album features weird between-song segues, with things like Davy Jones reciting a nursery rhyme, dolphin noises, and a creepy electronic voice that thanks you for listening. It presages the skits that pervade rap albums, though I don't like it here anymore than I do there.

Dolenz, Jones, Boyce & Hart is far from a perfect album, but it is fun and enjoyable for the most part. The band were probably never going to become a permanant replacement for the Monkees, but their work is a significant footnote, especially considering that it's a better album than at least 5 of the proper Monkees releases.

Grade: B
Fave Song: I Remember the Feeling

Anonymous said…
This comment has been removed by a blog administrator.
7:18 AM

Anonymous said…
This comment has been removed by a blog administrator.
12:24 AM