July 15, 2009
Author's Note: While sorting through my files recently I came across the following forgotten review. I had previously labored under the delusion that my first album review was Wilco's Summerteeth, but this one preceded it by two months. It first appeared in the January 15, 1999 issue of the Augustana Observer. 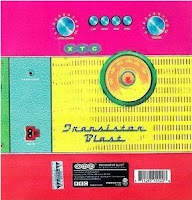 Though they were on the brink of international success, the British band XTC were in serious trouble. It was 1982 and the band were in the middle of touring behind English Settlement, their most mature and best-recieved album yet. However, singer Andy Partridge had begun to have on-stage panic attacks. After one particularly bad spell of this gripping fright, Partridge told his bandmates he was finished touring, forever.

Now XTC have released Transistor Blast, a four-CD set comprised of some of the band's best live performances. Leave it to an unconventional group like XTC to release a live compilation 16 years after their last concert.

When the Beatles stopped toruing in 1966 it led many to claim that it would be the end of their career. And this was directed toward a band who were the biggest and most popular in the world! Imagine then, XTC, who'd had only a couple of minor UK hits and almost no US exposure (though English Settlement's catchy Senses Working Overtime did get some airplay). To stop touring, which is the way bands generate fans, sales, and income, was most certainly career suicide. In some ways, it was. It's probably the reason you've never heard of XTC.

But the band has somehow survived, growing quirkier and more complex, and even scoring minor US hits with Dear God, Mayor of Simpleton, and The Ballad of Peter Pumpkinhead in 1986, 1989, and 1992 respectively. And though they've grown consistently better as a recording band, XTC have languished in relative obscurity, and were even dropped from the Virgin label in 1996. One wonders if they had simply toured behind their wonderful records, they would have become stars.

Transistor Blast certainly makes a case for that arguement. Consisting of two discs worth of BBC Peel Sessions (in-studio live performances) and two discs of actual live performances from 1978 - 1982, the whole set is electrifying. The band attacks every song with methodical fervor, often speeding up and improving upon the studio versions. Nearly every performance showcases the sharp and focused musicality of the band as a performing unit. As a result, the quality song-writing of Partridge and bassist Colin Moulding stands out as bright as the neon packaging of the discs themselves.

Discs one and two contain the Peel Sessions and range in time period from 1977's jumpy Statue of Liberty all the way to 1989's amelodic Garden of Earthly Delights. Though these are live performances, they were recorded in a radio studio with a small or nonexistant audience. One of the few drawbacks of Transistor Blast is that these tunes aren't presented in any particular order. It would have made more sense to arrange them chronologically, given the varied styles and evolutionary nature of the band's musical progression. Nevertheless, as presented, the songs accurately demonstrate XTC's eclectic nature.

Disc three is a complete concert from 1978, and it casts a different light on the band's somewhat underwhelming first album, White Music (which is performed here in its entirety, along with early singles and B-sides). Disc four presents another full concert, this one from 1980 (it was previously available as a somewhat-rare disc titled, appropriately enough, Live in Concert). This one is the best of the bunch, and showcases how far the band had advanced with two additional years of performing together. It doesn't hurt that it features songs from their superior third and fourth albums (Drums and Wires and Black Sea).

Despite its excellence, I cannot recommend Transistor Blast to a listener who's new to XTC. Of course, for diehard fans like myself it's a treasure trove, and even those with only a casual interest in the band will probably find it worthy. But a new listener should start with a proper album like Skylarking or Nonsuch. Unless I miss my guess, anyone who enjoys those albums will want to buy Transistor Blast eventually.

Transistor Blast is XTC's first release on their new label, and serves as a warm-up for their next album, Apple Venus, Volume 1. It's due in February, and promises to be another Beatles and Beach Boys-inspired dose of pop grandeur. And no, a world tour will not follow. As XTC continues on as a brilliant studio band, they've given us a four disc epitaph for the brilliant live band they once were.

Anonymous said…
Transistors are very very important because they are helpful ..........