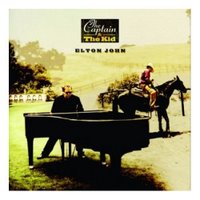 In 1975 Elton John released Captain Fantastic And The Brown Dirt Cowboy. It was the very first album to debut at the top of the Billboard charts. And it wasn't even a commercial album! Instead it was an autobiographical song cycle, the type of complete listening experience that record affeciandos such as myself tend to completely geek out over.

That album told tales of two men, Elton and his lyricist Bernie Taupin, struggling together on the precipice of fame.

As the 2006 sequel The Captain & The Kid begins, they've fallen over the side.

Postcards From Richard Nixon finds Bernie and Elton arriving in America and heralded as heroes. They're amazed by what they find there, beautiful people, Steve McQueen in a red Porsche and open arms of a president who never failed to try to ride coattails of a popular culture he was completely out-of-step with. My favorite moment is when Elton describes California as "Brian Wilson's promised land" and the band responds by reeling off some Beach Boys harmonies.

The next song contiunes to document the dizzy heights. Just Like Noah's Ark is a foot- stomping pub rock number documenting the ass-kissers and panderers that surround the famous. Here we not only get a rollicking organ solo, but also the first of many self-refrences in the line: "But for every Tiny Dancer there's a dog that's had his day."

The final song the album's opening trilogy is I Wouldn't Have It Any Other Way (NYC), a piano ballad akin to Mona Lisas and Mad Hatters. The world REALLY didn't need another tribute to New York, but I can forgive it because of the sense of contentment that's so palpable in both the lyrics and the music.

Too bad it couldn't last. From there the album tells us how it all fell apart. Tinderbox, one of the album's strongest tunes, finds the men coming down from an impossibly successful and prolific run (circa 1976's Blue Moves). According to the song they were done in by personal friction (in the homoerotic line: "rubbing up together around the clock") and flagging interest ("a wind of change blew across our sales"). Musically the song features and harmonic vocal "ohh-oh-oh-oh" hook quite akin to Captain Fantastic's Curtains.

Rock bottom comes next, in the form of And The House Fell Down, which tells in detail of the drug excess and isolation that seem to be a part of every massively successful musician's story. Ironically the song may be the album's high point!

From there the tone turns reflective. The Blues Never Fade Away is a song of survival, wherein our storytellers begin to wonder why they made it when so many others didn't. It recalls other euolgistic songs by the duo, including Candle In The Wind, Ballad Of The Boy In The Red Shoes and Empty Garden (Hey, Hey Johnny) (the latter especially in the line: "I miss John Lennon's laugh.")

That's followed by another tune of mortality, The Bridge. Though it's the album's most generic song lyrically, I have to admit there's a beauty in the minimalism. Combined with I Must Have Lost It On The Wind - a nice tune that seems lyrically out of place - the album flags in momentum here.

Thankfully it all comes right back with Old 67, in which the two old friends get together to reminisce about how far they've come. Nostalgia is a powerful emotion, and I fully admit to getting chills when the song recycles the line "it's a little bit funny this feeling inside" from Your Song.

And finally the story ends with the title track. The intro to The Captain & The Kid reuses the acoustic strum that opened the title track to Captain Fantastic and the Brown Dirt Cowboy. Fortunately, the tune that emerges from it is completely different and nearly as memorable. More than any other song on the album, this one refrences their past catalog, as in the line, "you a tumbleweed and me on a yellow brick road." As the song ends, that familiar strum comes back again, bringing it all full circle, 31 years later.

Clearly, self-mythologizing suits the boys. Despite the mostly serious tone of the record, they obviously had fun. In the liner notes they even throw in lyrics to a couple of songs (River On The Thames and 12) that aren't on the album, just like they did with Dogs In The Kitchen on Captain Fantastic. They obviously knew this was going to be something special.

Even so, Taupin and John allow themselves surprisingly little triumph, instead stating in the chorus of the final song: "Well you can't go back and if you try it fails."

Judging by sales - the new album debuted at number 18 with less than 50,000 copies sold - maybe they're right. Of course, artistically, they are completely wrong. You can go back, and you should, at least once in awhile.

Grade: A-
Fave Song: And The House Fell Down
Fave Line: "We heard Richard Nixon say / I gotta go, but you can stay."

sexy said…
This comment has been removed by a blog administrator.
8:21 AM