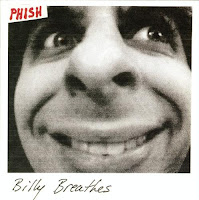 Change. Sometimes, we dread it. Other times, it’s warmly welcomed. And still other times, it’s just flat-out confusing. I like to believe that some things stay constant. For example, if a record is good in 1996, it’s good in 2006, right? That’s where change comes in.

Witness: Billy Breathes. When it came out I was a sophomore in college, and it sounded pretty sweet to my ear. My roommate had played earlier Phish discs like Rift and Hoist ad nauseum, but Billy Breathes seemed like something else altogether. For one, it was cohesive, a whole album experience, rather than just a random collection of songs. And I wasn’t the only one won over. I recall a reading a review at the time in which the critic compared the album to The Beatles’ Abbey Road!

If asked for a review having not heard the album in approximately 8 years, I would have told you that it’s the only essential Phish album, given it an “A”, and declared it a viable candidate the top ten of 1996.

But I gave the CD a spin before this review, and was surprised to find myself slightly bored and annoyed with it. It seemed overindulgent, meandering, flat. And of course, this leaves me with the question, what changed? You always hear reviewers say something “hasn’t aged well,” but that never holds water for me. Sure, certain production techniques have gone out of style, but a good melody or performance is a good melody or performance. I guess the Billy Breathes conundrum is more slippery than that. Besides, music doesn’t change. People do.

It’s completely possible that as an album, Billy Breathes was never very good in the first place. Perhaps it just caught me at a time when nothing else interested me. Maybe it only spoke to me as I was then, and my musical tastes have either widened or narrowed.

Not to say the album is free of highlights. Free is a perfect opener (and minor radio hit), the kind of sunshiny pop Phish could conjure up from time to time, built on lush harmonies and ‘70s guitar. Other standouts are few and far between. Waste is a spare, sweet slow-build ballad also powered by strong harmonies. And who could resist the romantic sentiment: “Come waste your time with me”? Theme From The Bottom is an epic about an undersea creature, featuring a wonderful chorus, an instrumental freakout and a barbershop breakdown. And Prince Caspian is a satisfying classic country rock homage to C.S. Lewis’ Narnia character.

The rest is versatile, but slight. Songs careen from zany blues to modern jazz to warbled country, but without a memorable tune.

And, really, where did that Abbey Road comparison come from? Okay I can hear it, ever so slightly, in the way Swept Away, Steep and Prince Caspian segue into one another, but it’s nowhere near as inventive or interesting as the side two finale to The Beatles’ recording career (which, by the way, I listened to not two days ago and enjoyed immensely). I strongly suspect that the reviewer who made that comparison is looking back now with ten extra years of wisdom and perspective, and is perhaps a bit ashamed of his or her youthful exuberance. But hey, people change, and so do opinions.